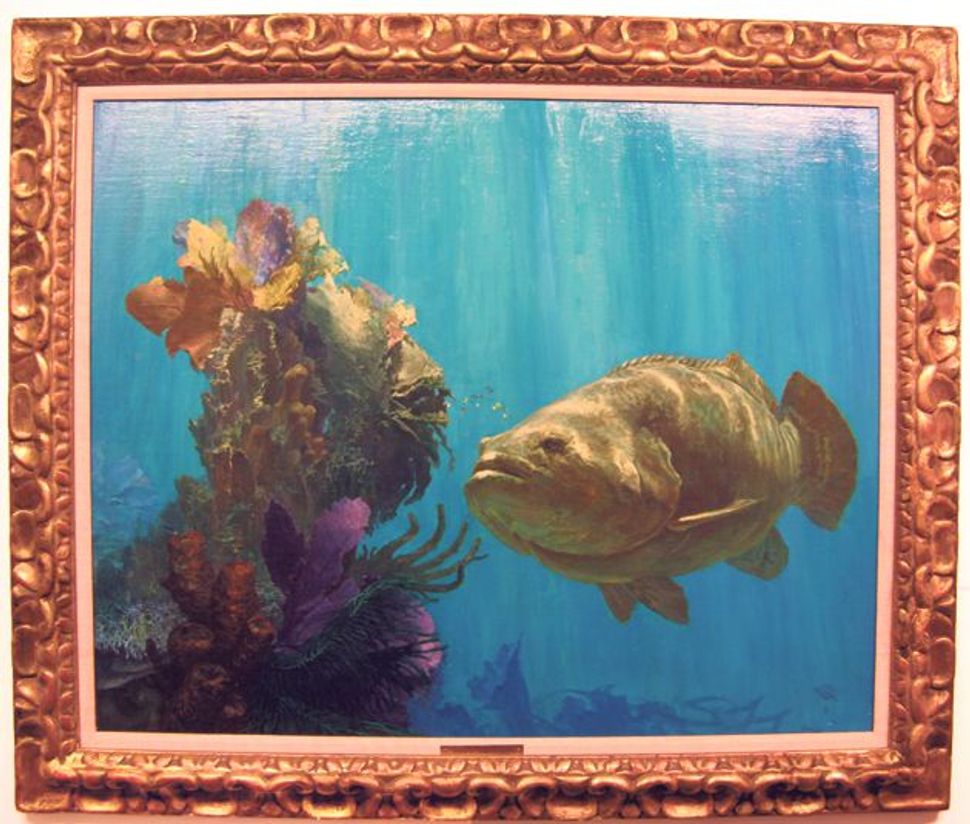 In all my years of watching Jacques Cousteau’s undersea documentaries, I do not recall any reference to an ocean denizen known as a “Jewfish.” The species, however, is featured prominently in “Oceans and Other Worlds,” a fascinating exhibition of works by Brooklyn-born artist Stanley Meltzoff. The exhibit can be seen at the Society of Illustrators building, on 63rd Street on Manhattan’s Upper East Side. One of several startling blue canvases captioned “Jewfish” bears the explanatory note: “As an observant Jew, the artist whimsically expressed his affinity for Jewfish and painted them often.”

Meltzoff, the son of a cantor, died in 2006 at age 89. After viewing the exhibit, I spoke with his friend and fellow angler Mike Rivkin, who co-wrote “Stanley Meltzoff — Picture Maker” (Silverfish Press, 2009), a comprehensive book on Meltzoff’s life and work. “Stanley was the first and indisputably the best fish painter of all time,” Rivkin said. “A diver in the world’s seven seas, he perfected his skill as a scuba diver and was the first artist to paint big game fish in their natural underwater environment. Fish painters today do not attempt this, because it is too complicated.” Deepwater fish — tuna, marlin, sword — the most difficult species for non-fishermen to visualize, fascinated Meltzoff.

Rivkin told me that the Jewfish is now known by the more politically correct name of goliath grouper. But I wondered how the fish got its name in the first place. The Oxford English Dictionary cites a passage from the 1697 “A New Voyage Round the World” by explorer William Dampier: “The Jew-fish is a very good Fish, and I judge so called by the English, because it hath Scales and Fins, heretofore a clean Fish, according to Levitical Law… and the Jews at Jamaica buy them, and eat them very freely.” In the November 28, 2011, Columbia Journalism Review article “Friendly Fire: Insulting Without Meaning To,” newsroom consultant Merrill Perlman notes that in 2001, after receiving complaints, the Committee on Names of Fishes, an arm of the American Society of Ichthyologists and Herpetologists, changed the name.

The Society of Illustrators’ lower gallery is devoted to the works Meltzoff created prior to focusing on the world’s oceans. On display are panels he prepared for the Reader’s Digest condensed books series and Sports Illustrated. Also included are a panel called “Crusader in Holy Sepulcher, Jerusalem,” a 1943 pen-and-ink drawing called “Children of Fascism” and a “Jewish New Year Illustration for V-Mail,” dated 1944.

Meltzoff got his start as an illustrator and war correspondent for the Army newspaper Stars and Stripes and went on to work for a Madison Avenue ad agency and to produce covers for Life in the 1960s. But with the development of color photography, Rivkin said, Meltzoff realized that the era of the classically trained illustrator was coming to an end. After being commissioned to create a portfolio of fish for Sports Illustrated, he decided to build his career on fish.

“When Stanley wasn’t painting, he was diving,” Rivkin said, adding that Meltzoff wondered if “man-eating sharks ascend from the depths. No one really knew, so Stanley undertook to find out.”

As he did so, he observed and photographed every aspect of how game fish behave: their mechanics of movement; their coloring when aroused, and their behavior in groups and communities. Rivkin elaborated: “Of the 300 odd pictures [Meltzoff] completed [over 30 years], most were commissions from the sporting press, with a few others… to placate collectors and tournament organizers. Most fish painters today can produce credible static views of the usual species; however, putting a fish in motion on a two-dimensional canvas is another thing altogether…. Stanley will remain king of the fish painters for a long time to come.” I asked Rivkin how much one might expect to pay for a Meltzoff painting, and he replied that a small study can go for around $10,000, with large canvases costing even more.

I had a follow-up chat with Rivkin about the artist’s father, Nathan Meltzoff , who, after 40 years as cantor at Manhattan’s Congregation Rodeph Sholom, wrote an autobiography that was published by the congregation in 1966. Nathan Meltzoff was born in Vilcomir, a small Lithuanian town that was spared the pogroms then sweeping Russia. He studied voice and toured with the Russian Imperial Choir in 1896. When the family came to America, Rifkin told me, they first settled in Minnesota.

“Oceans and Other Worlds” is on display until August 18. Admission is free.