Mega-Donors Give Obama a Boost 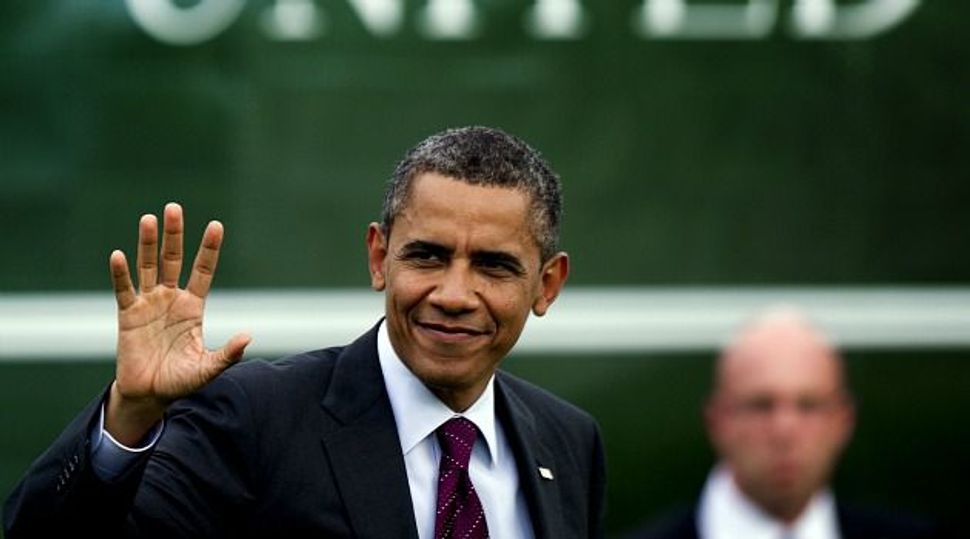 Big Haul: President Obama is still way behind Mitt Romney when it comes to donations to nominally independent super PACs. But gifts from two wealthy Jews give him reason to hope he can stay close. Image by getty images

Qualcomm founder Irwin Mark Jacobs and Saban Capital Group Chairman and CEO Haim Saban, who had been on the fence about backing Obama’s re-election, made separate donations to the nominally independent campaign groups in June.

The seven-figure donations weren’t nearly big enough to compete with the flood of dollars flowing to super PACs linked to Republican Mitt Romney. Buoyed in part by multimillion-dollar donations from Jewish casino mogul Sheldon Adelson, the GOP-allied groups are raising money at a far faster rate than those tied to Obama.

But the addition of both of the two billionaires to the ranks of deep-pocketed Obama super PAC donors could help Democrats rest a little easier. Donations from the ultra-wealthy have taken on increased importance this presidential election cycle because of the U.S. Supreme Court decision allowing unlimited donations to super PACs that maintain a veneer of independence from the presidential campaigns.

Jacobs could not be reached for comment. In a statement to the Forward, Saban said: “I have, and always will be, a champion of the Democratic Party, President Obama, and the Party’s elected officials.”

Obama’s campaign has $97 million in the bank, far more than Romney’s $22 million. But the pro-Romney super PAC Restore Our Future reported $21 million cash on hand at the end of June, compared with only $2.8 million at pro-Obama Priorities USA Action.

The Romney election apparatus, which includes the Romney campaign, the Republican National Committee and Restore Our Future, heavily outpaced the Obama operation in fundraising in June. If the trend continues, it raises the possibility that GOP-aligned groups may have the financial upper hand as the campaigns battle in the final months leading up to the November election.

The Romney super PAC raised $20.7 million in June, including a $10 million splurge from Adelson. This compares with just $6.2 million raised that month by the Obama super PAC, including the gift from Jacobs and part of the gift from Saban.

Jewish private equity investors, hedge fund managers and real estate developers have played a major role in Restore Our Future’s fundraising efforts. Major Jewish Democratic donors like Penny Pritzker, meanwhile, have been conspicuously absent from Priorities USA Action’s donor rolls. Saban, who holds dual American and Israeli citizenship, is a longtime Democratic donor with close ties to former president Bill Clinton and Secretary of State Hillary Rodham Clinton. Reports last year suggested that Saban was frustrated with Obama over his Israel policy. In an interview on CNBC in May 2011, Saban suggested he might not donate to Obama’s re-election effort.

Saban said that “he frankly doesn’t, I believe, need any of my donations,” though he maintained that he would give if he were asked.

The interview came a week after Israeli Prime Minister Benjamin Netanyahu objected to a call by Obama for a two-state solution based on the pre-1967 borders and mutually agreed upon land swaps. Saban’s CNBC interview was taken by at least one right-leaning outlet as a sign that Obama’s support among Jewish Democrats was weakening.

According to a February report in The Wall Street Journal, Democrats have been reaching out to Saban for months.

Compared with Saban, Jacobs, 78, is a relatively low-profile political figure. Better known for his philanthropy, Jacobs, along with his wife, is a major backer of the San Diego Symphony, among other causes.

Jacobs’s $2 million donation to the pro-Obama Priorities USA Action, made June 11, is one of the two largest yet made to the super PAC. The only other $2 million donation is from DreamWorks Animation founder [Jeffrey Katzenberg]( (https://forward.com/articles/154539/katzenberg-brings-hollywood-to-obama/ ‘Jeffrey Katzenberg’), who has spearheaded fundraising for the group.

The donations from Katzenberg and Jacobs, both of whom are Jewish, make up 20% of the total raised by Priorities USA Action.

Other major new super PAC donations from Jewish donors in recent months have largely been on the Republican side. The $10 million from Adelson and his wife has already received heavy press coverage. The Adelsons also gave a less-noticed $5 million donation to a super PAC linked to House Majority Leader Eric Cantor.

Bruce Kovner, a hedge fund manager and longtime backer of conservative causes, also gave to the Cantor super PAC. Kovner and his wife gave a total of $300,000.

Mega-Donors Give Obama a Boost