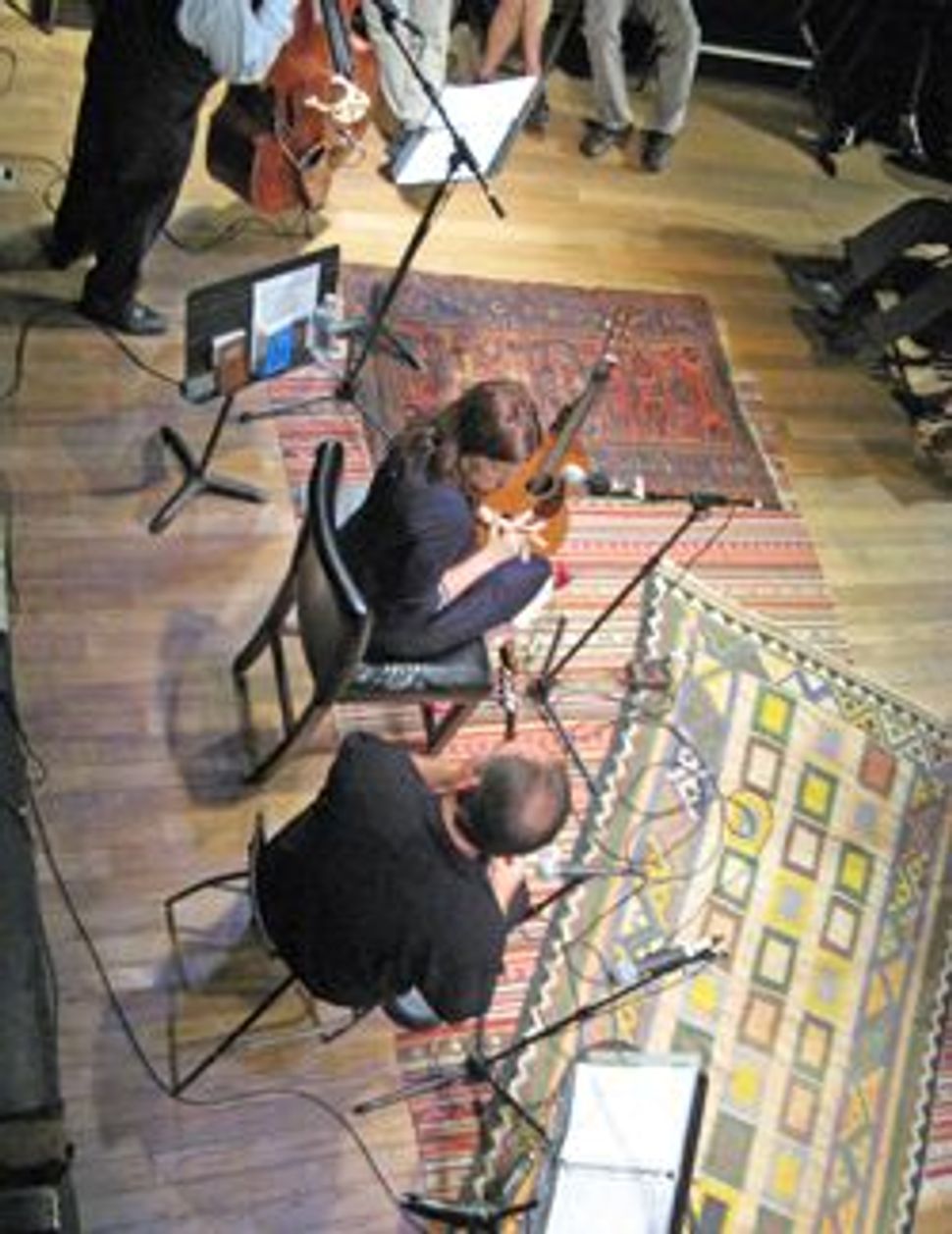 “We welcomed her with open arms. She came to shul regularly,” David Gaffney, rabbi at the Conservative Synagogue of Fifth Avenue, said of actress and singer-songwriter Mare Winningham, who had visited the synagogue in years past. We (the rabbi, his wife, my daughter and I) had just seen Winningham perform on July 16 in a country-Jewish-folk, or Jewgrass, concert at Barrow Street Theatre, in Greenwich Village. “She is a haimish, sincere person with noble qualities,” Gaffney told me. “The way she conveyed the liturgy — songs for God and in celebration of Judaism — was [a kind of] kiddush hashem,” a sanctification of the name of God.

With heartfelt twang, Winningham, accompanied at the concert by fiddler, mandolin and guitar player Tim Crouch and bluegrass bass player Irl Hees, explained to a rapt audience the rationale for each of her songs. “I was born Catholic…. I chose Judaism because its first lesson is that what is most important is man’s relationship to man…. I wrote about the yetzer horah [evil inclination], Satan. In “Pirke Avot” (“Ethics of the Fathers”) I wrote about making the Torah your ‘fixed point’… I found a poem in the Siddur.” She stopped and smiled. Before singing the song, she said, “I like to think that Rabbi Gabiron of Spain is listening to his 11th-century Spanish poem [set to bluegrass music].”

Winningham’s sense of humor was in full bloom with the following joke: “A man finds himself in heaven approaching the Pearly Gates. He asks the Angel Gabriel, ‘Who is that man walking around in a white coat with a stethoscope around his neck?’ The angel replies: ‘Oh, him. That’s God. He thinks he’s a doctor.’” Accompanied by Crouch and Hees, she closed the concert with “Hatikvah.”

During our chat the next day, Winningham told me that she took her daughter to Poland with the March of the Living on the occasion of the 60th anniversary of the liberation of Auschwitz. “We were a contingent with the ADL [Anti-Defamation League] and its [national] director, Abe Foxman,” she said. “On the march, I met a young woman who had gone on the march and decided to move to Poland to study Judaism.” Commenting on how she develops each song, Winningham reflected: “All these songs were songs for God and man in celebration of Judaism… like that ‘fixed point’ in the Midrash about Moshe on his journeys up the mountain to argue with God and the angels…. I love the midrash of Moshe outwitting celestial beings.”

Winningham is currently performing in the play “Tribes” at Barrow Street Theatre. She’s perhaps best known for her performance as Georgia Flood in the film “Georgia,” which earned her an Academy Award nomination. She has also been nominated for Drama Desk and Golden Globe Awards, and has won two Emmys. Her film and TV credits include “St. Elmo’s Fire,” “Miracle Mile,” “Turner & Hooch,” “The War.” “George Wallace,” “Mildred Pierce” and “Hatfields & McCoys.”

Should you plan to travel to exotic regions, don’t make a move without first reading Ben Frank’s latest memoir and travel guide, “The Scattered Tribe: Traveling the Diaspora From Cuba to India to Tahiti & Beyond” (Globe Pequot, 2011). During a New York stopover on his national book promotion tour, Frank, who boasts, “I’m 78 and still traveling,” told me: “What is most important is that even though we have a Jewish homeland, Jews still live in the Diaspora. But it is a different Diaspora than 60 or 70 years ago. It is one of choice. Jews, now living in exotic communities, do everything to survive [as Jews], even though their numbers are small. And, if you want to go to a country that has not changed in the past 50 years, go to Burma [now called Myanmar]. There are only 20 Jews in the entire country. In Yangon [once called Rangoon] there is one man, Moses Samuels, who keeps Judaism alive in Burma. Every morning, he opens the [150-year-old Musmeah Yeshua] synagogue and waits for tourists from America or Australia for a minyan. Then there’s Cuba, where the Jewish community is thriving as much as one can under a dictatorship.”

Frank’s far-flung exotic destinations include the vibrant Jewish congregation in Tahiti’s capital, Papeete, where he met many Algerian Jews. The community’s synagogue, built in Tahitian style, is named Ahaba ve Ahava (“The Congregation of Love and Friendship”) and hosts nearly 200 for Yom Kippur services. Frank told me: “I met a man, a Frenchman, in Tahiti whose father never told him he was Jewish until he became 21. The father fled Czechoslovakia, joined the Red Army in the USSR, escaped from a gulag, got to France, joined the French Foreign Legion, was in Dien Bien Phu in Vietnam, was sent to prison in France and then married a nurse who was not Jewish. When he finally landed in Tahiti he became a religious Jew and went through conversion with Chabad…. These are some of the unforgettable characters I discovered on my journey.”

We chatted at length about the chapter “Sibir, The Sleeping Land: Riding the Trans Siberian Railway and Visiting Irkutsk, Birobidzhan, and Vladivostok.” Following a comprehensive history of Siberia, which is home to some 30,000 Jews, with 3,000 Jews in Irkutsk (aka the “Paris of Siberia”), Frank writes that though they were once involved in the fur trade and mining, “today in Russia’s ‘free market’ economy [Jews] are professionals, business people, entrepreneurs, who live alongside ethnic minorities such as Tartars, Chuvash people and Buryats.” He notes that in “mid-2004 a middle-of-the night electrical fire nearly destroyed Irkutsk’s entire historical synagogue [built in the 1860s], including the loss of valuable records.” He quotes a member of the congregation: “The synagogue is now a new building inside old walls…. After a five-year struggle, with renovation… the decorative interior with elegant shining chandeliers and the prayer hall with the Holy Ark were put in place.”

No passport, visa, ticket or pat-down required to relish this book. Just read and enjoy.