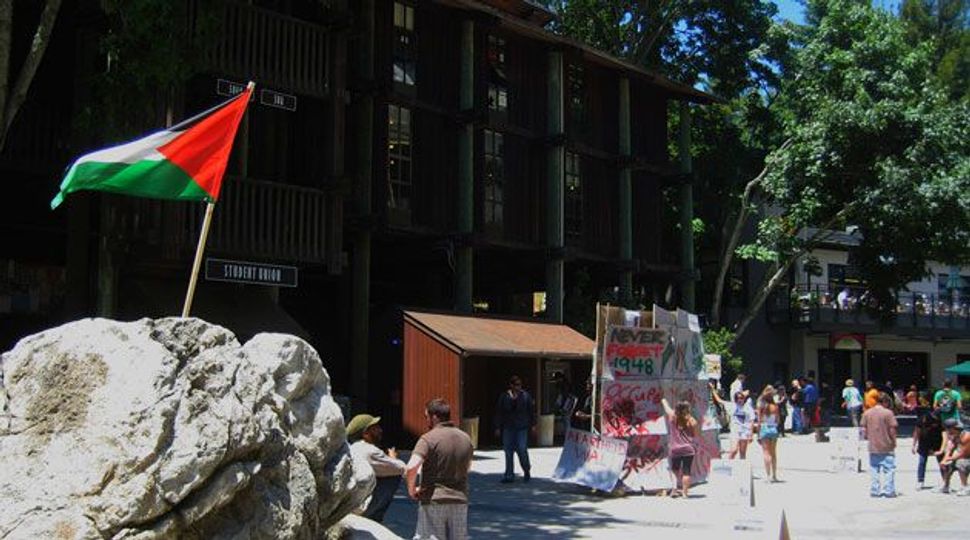 Free Speech? A report is urging the University of California to ban a wider range of conduct considered ?hate speech,? which could include anti-Israel protests. Image by milesgehm/via flickr

The University of California, birthplace of the 1960s campus Free Speech Movement, is now considering a proposal that would ban certain forms of speech as a result of a report on Jews and the Israel debate at its schools.

The July 9 report, issued by an advisory panel to UC President Mark Yudof, concluded that Jewish students sometimes face a hostile environment at UC schools in the form of anti-Israel protests. It recommends that UC “seek opportunities to prohibit hate speech on campus.”

The panel “recognizes that changes to UC hate speech policies may result in legal challenge,” the report reads. But it encourages UC to “accept the challenge.”

Yudof will make the final call on the recommendations; no date has yet been established for his decision. But Alan Dershowitz, a First Amendment lawyer and author of “The Case for Israel,” said he would challenge such a ban: “It’s a very serious mistake,” he told the Forward. “The first victims of the policy would be pro-Israel advocates. It will backfire.”

A spokesman for Yudof said the UC leader was out of town and unable to comment for this article. But the spokesman, Steve Montiel, said that the president “is a First Amendment scholar who has been a champion of free speech, and I don’t see anything changing that.”

The report was commissioned by a subgroup of the UC President’s Advisory Council on Campus Climate, Culture, and Inclusion, and co-directed by Richard Barton, a senior lay leader of the Anti-Defamation League. The council was established in 2010 after several fraternities at UC San Diego organized a racially-charged “Compton Cookout” party that was seen as slurring blacks. Anti-gay graffiti at UC Davis the same year also played a role in the council’s creation. Over the past two years, Jewish students and professors have asked the council to address the status of Jewish students on campus in the context of the Israel debate.

The 10-page report describes a campus system that is widely hospitable to Jewish student life. And it acknowledges that the Jewish communities on UC campuses hold diverse opinions on Israel. But during the annual Israel Apartheid and Palestine Awareness weeks at California schools, the report stated, “pro-Zionist Jewish students described an environment in which they feel isolated and many times harassed and intimidated.”

The report outlines eight recommendations for the UC system to improve its treatment of Jews, including adopting a “hate speech-free campus policy” that would include prohibition of anti-Semitic discourse.

To identify anti-Semitism, the report suggests using a 2005 “working definition” put forth by the European Union’s Monitoring Centre on Racism and Xenophobia (now called the Agency for Fundamental Rights). That definition, which is used by European watchdog groups to monitor anti-Semitism, states that, depending on overall context, anti-Semitism could include:

• “Denying the Jewish people their right to self-determination, e.g., by claiming the existence of a state of Israel is a racist endeavor;”

• “Applying double standards” to Israel by demanding it follow standards “not demanded of any other democratic nation;”

The report also notes that UC currently lacks a “hate-free policy that allows the campus to prevent well-known bigoted and hate organizations from speaking on campus.”

The right to bring outside groups on campus without restriction for peaceful speech was one of the primary victories won by the 1964 Free Speech Movement at UC Berkeley — a movement in which Jewish students played a prominent role. Its success led to such restrictions being lifted at many other public universities nationwide.

The recommendations will be reviewed by UC’s office of student affairs and its general counsel. If Yudof decides to move forward with them, they will be assessed by the UC academic senate, and by students and administrators. But, as UC president, Yudof retains the final say.

It is not clear what the “hate speech-free campus policy” will entail. The term “hate speech” is not defined. But the report urges that the university should “push its current harassment and nondiscrimination provisions further, clearly define hate speech in its guidelines and seek opportunities to prohibit hate speech on campus.”

Asked for an example of hate speech, Barton, the co-director of the panel that produced the report, said: “The issue is when [pro-Palestinian] groups come on campus and they say, ‘We are the voice of the Palestinians and our voice isn’t being heard and it’s because Jews control the media.’ That is flat-out anti-Semitism.” Barton said he didn’t know if calling Israel an apartheid state would meet the criteria. “I couldn’t give you an answer without looking at the definition of how courts define hate speech.”

Barton’s report was heralded by Jewish groups like Stand With Us, which represents “Israel’s side of the story,” in its own words, on college campuses and beyond. “After all these years, it has given legitimacy to students who have felt this kind of intimidation,” said Roz Rothstein, the group’s executive director. “Your feelings are being validated.”

But it has come under sharp criticism from pro-Palestinian organizations and others. A group of current and former UC students and professors wrote an online letter to President Yudof, contending that the report misrepresents the Palestinian rights movements on UC campuses as anti-Semitic and excludes the experiences of Jewish students who criticize Israel, among other concerns. The same group also created a petition asking Yudof to table the report; it has received almost 2,000 signatures.

Jewish Voice for Peace, a Jewish group skeptical of Zionism and highly critical of Israeli policies toward the Palestinians, also slammed the report. In an interview, JVP Deputy Director Cecile Surasky said that the report makes only a cursory mention of Jews involved in pro-Palestinian activism. The report, she added, doesn’t reference cases on UC campuses in which some Jewish students were excluded from Jewish student life due to their political views on Israel, such as a 2011 incident when the Berkeley campus’s Jewish Student Union voted to bar J Street, the dovish pro-Israel group, from membership.

“It doesn’t reflect tons and tons of experiences that are also a part of Jewish life,” she said.

Another point of concern, she said, is Barton’s role as the national education chair of the ADL, a group that has spoken out strongly against some forms of anti-Israel activism on campus. Barton, who coauthored the report with Alice Huffman, the president of the California NAACP, is a member of the UC President’s Advisory Council on Campus Climate, Culture and Inclusion, which is made up of professors, students and concerned California citizens. Barton, who fits the last category, volunteered to conduct the research for the report.

Barton said that his ADL affiliation did not affect his view of the climate at UC schools. “The ADL doesn’t dictate to me how I do things,” he said. “We interviewed a wide spectrum of people and tried to put into the report that there is a great diversity of voices that exist.”

Also released on July 9 was a campus climate report on the status of Muslim and Arab students at UC Schools. Led by Jihad Turk, the director of religious affairs at the Islamic Center of Southern California, the report garnered much less attention than its Jewish counterpart.

It mainly focused on the day-to-day lives of Muslim students, many of whom say they lack proper dietary accommodations and that they have been subject to harassment by other students.

The report also commented on protests around the Israel debate, particularly the so-called Irvine 11 case. That occurred in 2010 when 11 students shouted down a speech by Israeli ambassador Michael Oren at UC Irvine. Ten of the students were convicted on two misdemeanor counts for civil disturbance and sentenced to three years of informal probation. The case, the report said, has had a chilling impact on Muslim and Arab student life across the UC system. “The Muslim community viewed the handling of the students as an affront to their community driven primarily by political pressure,” it reads.

The report also noted that students were frustrated when Yudof issued an open letter condemning a protest of a pro-Israel event. “Criticism of Israel or Israeli government actions is protected free speech when expressed in a lawful matter,” the report said.