75 Years of the Grisly Golden Gate 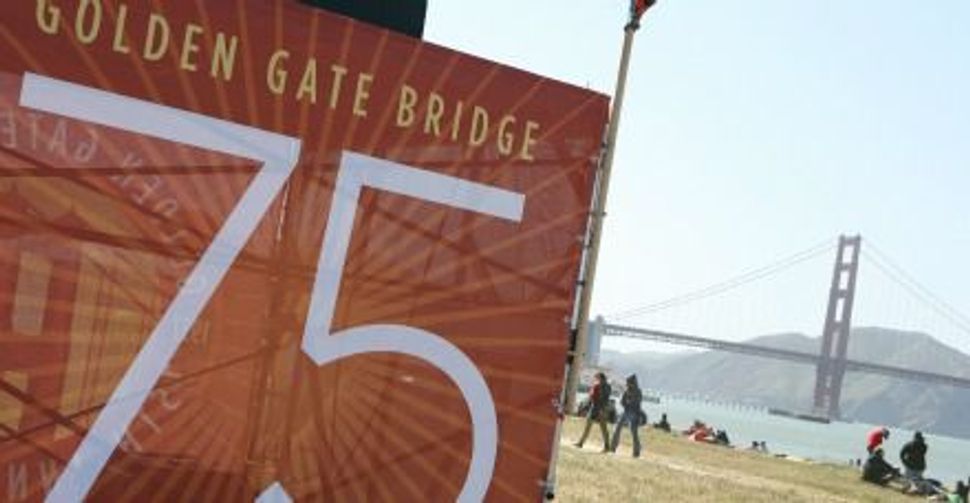 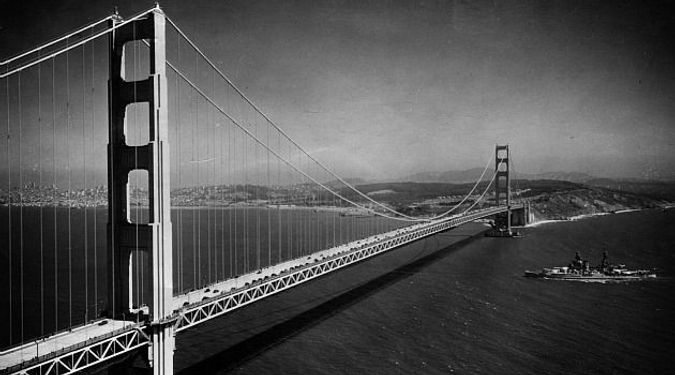 Suicide Span: A San Francisco synagogue is holding a memorial for the 1,558 people who have committed suicide from the Golden Gate Bridge. Image by getty images

Back in the days before psychology and the DSM, suicide was often viewed as a sin. According to early Jewish law, killing oneself was no different from killing another human being, and thus one who committed suicide was considered a rasha — an evil person.

Congregation Sha’ar Zahav of San Francisco is out to remove that religious stigma.

On August 7, exactly 75 years after the first suicide jump off the Golden Gate Bridge, the synagogue will hold a public Yizkor for the fallen, in which all jumpers will have their names read aloud. With 1,588 victims, or over 20 a year, the Golden Gate Bridge is the number one site for suicides in the world.

Read the synagogue’s prayer for those who committed suicide.

It’s been centuries since Judaism required victims of suicide be buried in a separate section of the cemetery and, now that the psychology behind suicide is better understood, even Orthodox congregations allow mourners to recite Kaddish for their loved ones who have killed themselves. But Jenni Olson, co-organizer of the service along with fellow congregant Eve Meyer, believes religion still treats suicide negatively.

“Historically, suicides have been shunned in Judaism and organized religion,” says Olson. “Specifically in how the bereaved are comforted in the aftermath of suicide. There’s room for improvement.”

Grieving a friend who committed suicide off the bridge in 1995 culminated in Olson’s 2005 film on the history of Golden Gate Bridge suicides, and this personal connection continues to fuel her activism today. In May, the congregation held Shavuot learning sessions connected to Jewish laws governing bridges in honor of the 75th anniversary of the bridge’s opening. It was then that Olson mentioned to the synagogue’s rabbi that this year would also be the anniversary of the first suicide jumper’s death.

Rabbi Camille Angel directed Olson to Eve Meyer, another congregant, who acts as Executive Director of San Francisco Suicide Prevention. Meyer has been a longtime advocate for a barrier on the bridge to prevent deaths, and joined up with Olson to plan this Yizkor event, the first of its kind.

“The only other time an event like this was held was on the bridge’s 40th anniversary in 1977, when Reverend Jim Jones led 600 pro-barrier activists to protest the bridge and the suicides, and said that the bridge is a symbol of social failure,” says Dayna Whitmer, who lost a son to the bridge in 2007. “This will be much more positive, and better accepted by the public.”

Whitmer’s son Matthew, whose father was raised Jewish, jumped when he was 20, after years of battling schizoaffective disorder and surviving previous suicide attempts. His mother, who keeps a blog and a website about Matthew’s suicide, was touched to hear about the Yizkor service.

“I’m glad it’s being done; Jewish religion has great respect for death,” adds Whitmer, who informed Matthew’s Jewish grandmother about the service as soon as Olson contacted her about it.

Despite Orthodox traditions frowning on suicide, local Chabad rabbis do not view the ceremony negatively.

Rabbi Shmulik Friedman of Chabad SoMa Shul – Downtown SF synagogue in downtown San Francisco said the Jewish approach to suicide should be two-pronged. First, it is up to the community to identify the needs of its members and provide them with help to overcome any suicidal thoughts. But if suicide does occur, Rabbi Friedman suggests a track not unlike the one taken by Sha’ar Zahav synagogue.

“Because these people are ill and have very troubled souls, we need to increase our prayers and mitzvahs to help their souls.“ Rabbi Friedman suggested taking on extra acts of generosity and prayers in honor of the soul of those who committed suicide.

Rabbi Dov Greenberg, executive director of Chabad Stanford Jewish center said the planned event was “a way of bringing greater public awareness to the sanctity of life and that’s a good thing.” He noted that Jewish law is clear in forbidding relinquishing of ones life. Still, Rabbi Greenberg said it is long held tradition that in most cases of suicide those taking their own lives are seen as suffering from mental problems and therefore are not responsible for their action.

Rabbi Angel was interested in holding the service for a number of reasons, most prominently because of her synagogue’s most distinctive aspect: Congregation Sha’ar Zahav is an LGBT synagogue, built on progressive, inclusive ideals.

“Sha’ar Zahav is a community that strives to be radically inclusive,” says Angel. “We know from our LGBT history that every life is a world, every life is a blessing, and every death is a loss. We’re to honor their spirit and their soul the same way we would for any other death.”

Aside from simply being one geographically close to the Golden Gate Bridge, as an LGBT community, Sha’ar Zahav’s congregation can relate to the suicides in more personal ways.

“One angle that is particularly moving from my point of view,” says Angel, “is that there’s been a recent epidemic of suicides among the LGBT community.”

“We have many congregants who have lost family members, spouses to suicide, in addition to people who have helped others end their lives after suffering from AIDS. Aside from Jenni, I don’t know of anyone who lost someone specifically to the bridge, but in this town it’s probably six degrees of separation.”

Whitmer, who plans to attend the ceremony, hopes it will “bring suicide out of the closet,” by allowing people to speak about it, and that it will call more attention to the need for the walkway to be closed on the bridge until a barrier is erected.

The Golden Gate Bridge is the only national landmark without a suicide prevention barrier in place, but activists like Whitmer and Meyer have been campaigning for years to change that. Olson’s 2005 movie helped reignite the conversation about it, and recent legislation signed by President Obama should make it possible for national funds to be allotted to build a net underneath the bridge.

John Bateson, author of the recently published “The Final Leap,” about suicide jumpers from the Golden Gate Bridge, provided the community with the list of victims that he had compiled for his book. As the former executive director of a crisis intervention and suicide prevention center in the San Francisco Bay Area, Bateson knows firsthand what the situation is like on the bridge.

“The railing on the walkway is so low that anyone can climb over it. It’s a very easy way to jump.” Even though some point to surveillance cameras and suicide hotline phones on the bridge as adequate prevention, Bateson says otherwise. “Most calls come from passing cars, not security guards watching cameras. And in the past 10 years, only 2 or 3 calls have been made from the bridge’s phones.”

Critics of the plan to build a net underneath the bridge point out that those who would jump from the bridge can simply choose elsewhere to commit suicide, in various other ways. Dayna Whitmer has an unexpected response to that: “I hope they do,” she says emphatically. “Jumping from the bridge is the most lethal way to commit suicide, with a 99% rate of death. It’s only 47% from a building jump, 10% from drugs, and suicide by guns is very difficult in San Francisco.”

Two men who have survived the jump from the bridge currently speak about their experiences and work to prevent others from attempting suicide.

Of the 1,558 confirmed suicides, only a handful seem to be Jewish, but that doesn’t deter the organizers of the Yizkor. Olson composed a special Kaddish for the ceremony (text below), honoring the dead regardless of religious identity. Traditionally, Judaism has always accepted the practice of saying Kaddish for a non-Jew.

As a rabbi, Angel believes this event has a greater lesson for all involved, and all who hear about it. “I hope people who read about this think about how they might include tradition and symbols to remember those who have been forgotten.”

With additional reporting by Nathan Guttmann

75 Years of the Grisly Golden Gate