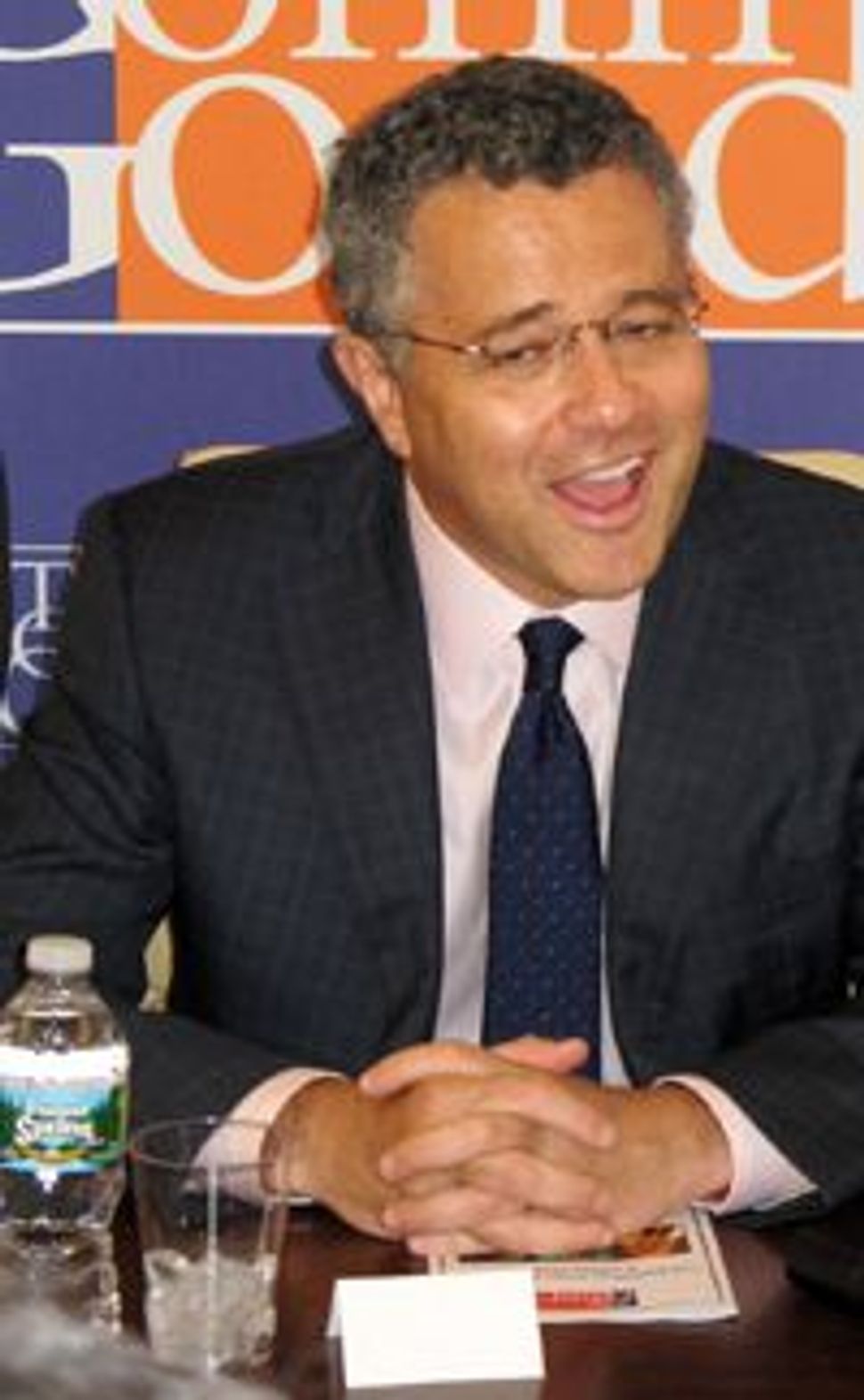 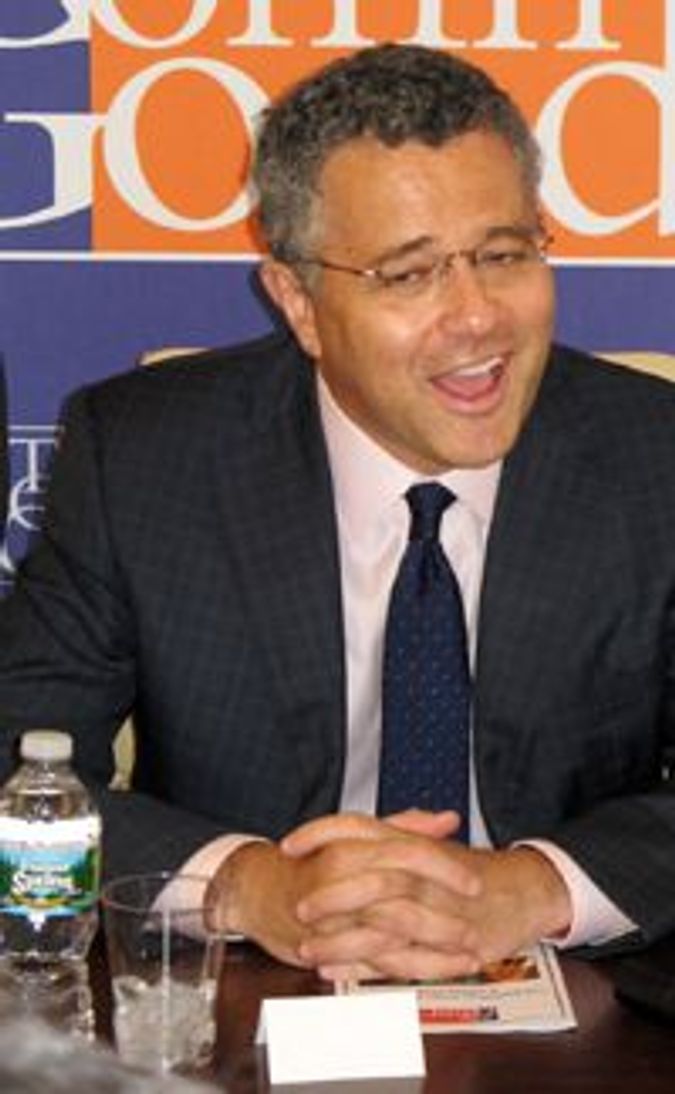 Following welcoming remarks by Common Good founder Patricia Duff, Bernstein, best known for his investigative reporting on the Watergate burglary, ventured: “I’d like to know a little bit about the audience. How many here expect President Obama will be re-elected?” Instructing the 72 people seated around the long conference room table to close their eyes, he assured them, “I will be the only one to see.” A sea of hands shot up. He looked around and then asked, “How many people here plan to vote for Mitt Romney?” I counted just three responders. “Trust me.. .not a lot of people. This is a really relevant point… that has to do with ideology and the difference of the Republican Party today. We have a divided party, a divided country politically… and a kind of take-no-prisoners ideological warfare on both sides…. The fact that we have this [health] legislation is an instance of exceptionalism… that is historic because this piece of legislation — assuming that it will stand — is going to change a lot of fundamental policies in the United States, even as it inflames… the political agenda of both parties.”

“We now rank 49th on life expectancy in the world [and] 37th on the health status of our nation,” said Blumenthal, director of the Health and Medicine Program at the Center for the Study of the Presidency and Congress. “This may be the first generation of kids not as healthy as their parents… and the baby boomers are aging and we are simply not getting what we are paying for.”

When it was his turn to speak, Toobin praised Bernstein, saying, “He not only brought down a president, but founded this great company” — a reference to luncheon host AllianceBernstein. Toobin then described the scene of the Supreme Court’s decision June 28 to uphold President Obama’s health care overhaul law. “The Supreme Court in action is surprisingly intimate… the lawyer just 10 feet from the chief justice… the press section just 10 feet from Chief Justice [Sonia] Sotomayor, who looked exhausted,” he said. “Justice [Antonin] Scalia looked bereft; and Justice [Elena] Kagan looked drawn.” But, Toobin went on, “the biggest shock to me was Chief Justice [John] Roberts…. He is just someone who is always positive, organized and confident — but he came out on that morning looking terrible. The Supreme Court today reflects what I think is the biggest development in American politics as well as law in the second half of the 20th century and the beginning of the 21st. And that is the evolution of the Republican Party, [which] used to contain a very substantial group of moderates…. The Supreme Court [had] for decades been dominated by moderate Republicans. [Now] they are gone from the Supreme Court, gone from the U.S. Senate, gone from the House of Representatives. There has never been a decision where Roberts joined with the Liberals…until this case. Roberts, who is a conservative, did not suddenly discover his inner moderate.”

After Toobin’s presentation, Bernstein chimed in: “The Affordable Care Act is a historic piece of legislation ,and it will survive…. Exactly how it will survive, we can talk about.” He went on to say that “there are parts of the act, however, that are subject to serious challenges,” including questions about “how it will be paid for.”

Bernstein continued: “It’s real… the hellish consequences of the expiration of the Bush tax cuts… the debt ceiling limit… and it is entirely likely that the challenge is serious and will probably be upheld.” After a pause, he said, “That would mean instead of universal coverage… we are back to the equation in which poor and poorer people will continue to overburden the medical system.” Alluding to concerns about potential cuts to end-of-life care and fear of so-called “death panels,” Bernstein said: “We have to come up with some kind of ‘triage.’ Medicare is unsustainable without aggressive, costly intervention.”

As we were leaving, I asked Bernstein, who is 68, about the “end-of-life” panel issue. He replied soberly, “Yes, it is a concern.” In the elevator, I met an elegantly dressed senior citizen who snapped, “Who the hell is going to second-guess how long I have to live?”

A Yiddish Discovery During Bastille Day Celebration in New York

Following a July 15 Bastille Day reception held in Le Skyroom of the French Institute Alliance Francaise, I wended my way through the street festival, celebrating “The Best of France in New York.” Tempting booths displaying French cheeses, wines, souvenirs and cultural exhibits lined East 60th Street between Fifth and Lexington avenues. The “L’Union Alsacienne of New York and the Friends of Alsace in America” booth caught my attention. Browsing through the spring-summer 2012 edition of their journal, I spotted a photo of the Marx brothers under the following heading: “The Amish and Yiddish”!

A caption explained: “At the beginning of your march to the West, America needed farmers to farm Pennsylvania and Ohio…. Alsace sent you the Amish, close to 400,000 Alsatian-speakers in Northern America. You needed diversity, we gave you Yiddish, which was born in the Rhine Valley. The USA needed the first greatest blockbuster film, and Alsace gave you William Wyler (born Weiler in Mulhouse), who directed the first ‘Ben Hur’…and The Marx Brothers, who were members of L’Union Alsacienne.” Also touted was Alsace-born illustrator Tomi Ungerer, whom I met in New York last year. Though Ungerer himself is not Jewish, he told me that his humor is. Sanguine about the history of the Jews in Alsace, he said: “During the French Revolution, 80% of the Jews of France lived in Alsace and were very prominent…. There are eight synagogues in Strasbourg.” I also remember reading that the beloved shtetl dish cholent — a mixture of meat, beans and potatoes that was often brought to the local baker to cook overnight in his oven from Friday to the Sabbath — had its origin in the French word chaleur, meaning “heat.”