Sami Rohr, Philanthropist Who ‘Invested’ Millions in the Jewish People 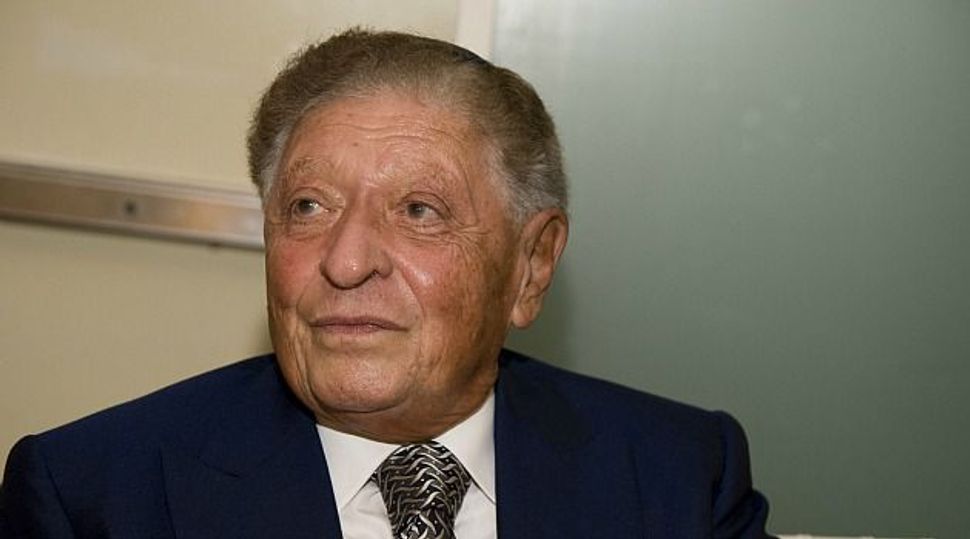 No Edifice Complex: Sami Rohr was a humble person, who did not want to have buildings named after him. He hoped to spend his money supporting the Jewish people around the world.

When Sami Rohr was a young real estate developer living in Bogotá, Colombia, in the 1950s, fundraisers from abroad often came to collect money from the local Jewish community. While Rohr donated to all of them, and encouraged his employees to do the same, emissaries from the Chabad-Lubavitch Hasidic movement impressed him more than others.

“Lubavitcher shluchim [emissaries] were different,” Rohr recalled in a 2006 speech to a Lubavitch gathering in the Crown Heights section of Brooklyn. “The Lubavitchers wanted to know whether they were married, whether they had children, where the children went to school. They wanted to put tefillin on them. They did not come only for the money.”

As a result, Rohr said, “Whenever a Lubavitcher came, I used to give him a bigger contribution.”

Rohr, a noted philanthropist who died of heart failure August 5 at age 86 in Miami, practiced the same approach in his giving as the Lubavitch fundraisers practiced in their collecting. According to friends and associates, he viewed his philanthropy as an investment in the Jewish people and was as involved with charitable efforts as he was with his business enterprises.

Over the course of his life, Rohr donated at least $250 million to Jewish causes, according to newswire reports, and was a major supporter of Chabad-Lubavitch, particularly of its efforts in the Former Soviet Union. Although his name was on the Sami Rohr Prize for Jewish Literature, a $100,000 award for emerging writers and one of the largest literary prizes in the world, he was a man whom many describe as modest and self-effacing.

“[The Rohrs] didn’t build buildings so much as they invested in what they thought of as religious and cultural institutions,” said Samuel Heilman, sociology professor at Queens College of the City University of New York and co-author of “The Rebbe: The Life and Afterlife of Menachem Mendel Schneerson.” “They understood and continue to understand the value of giving money to activities rather than buildings and physical things. They don’t have the edifice complex.”

Rohr was born in 1926 in Berlin, where his father, Oskar Rohr, was what he once described as one of the city’s “leading real estate men.” In 1938 the family left Germany, 13 days after Kristallnacht, finding refuge first in Antwerp, Belgium, and then in Lyon, France, before fleeing to Switzerland in 1943. When Rohr’s parents were taken to a refugee camp in Morgins, he was sent to a children’s home near Basel, from which he was taken and cared for by Shlomo Zalman and Recha Feldinger. In April of this year, Rohr made an emotional return to Basel, where he dedicated a new synagogue in the Feldingers’ memory.

After moving to Paris with his family following the war, Rohr left in 1950 for Colombia, where his aunt was then living. There he became a real estate magnate, almost single-handedly developing the west side of the city. In 1953 he married Charlotte Kastner, a survivor of Auschwitz who had immigrated to Chile and with whom he had a son, George, and daughters Evelyn and Lillian. Charlotte Rohr passed away in 2007.

“The Rohrs were embracing, warm, charming and really worldly people with a tremendous sense of Yiddishkeit and of doing good,” remembered Danièle Gorlin Lassner, a former dean of admissions and head of the foreign languages department at The Ramaz School in Manhattan. In the 1960s and ’70s, Lassner and her husband, Jules Lassner, lived in Bogotá. There she first met Charlotte Rohr at the city’s kosher butcher shop. When Lassner started a Hebrew school in the city, the Rohrs were among her first supporters, and their children her first students.

The family left Colombia in 1981 because of rising crime and settled in Bal Harbour, Fla., where they became a fixture of the local Jewish community and helped establish a synagogue. While still in Bogotá they had been active in efforts to bring a Lubavitch emissary to the city, and in the United States they continued their support for the Hasidic movement, which is known for its outposts all over the globe.

“They took their real estate money and said, ‘We don’t need buildings, but we’d like to be responsible for someone who has an influence in resurrecting Jewry,’” Heilman said. “I think Chabad meant that to them.”

“He knew how to invest and what impressed him about Chabad is that he knew he was getting his money’s worth,” added Rabbi Moshe Kotlarsky, a senior Chabad rabbi and vice-chairman of the movement’s educational arm, Merkos L’Inyonei Chinuch. “When he sent [an emissary out] he knew that the person was going to be there for life.”

Rohr’s contributions to Chabad can be felt today in many of the organization’s outreach efforts, including its Rohr Jewish Learning Institute for adult education programs and centers at university campuses in cities around the world. When George Rohr began investing in Eastern Europe in the early 1990s, his father took a special interest in Russian Jewry, assisting virtually every Jewish community throughout the FSU.

“He was interested in Russian Jewry when nobody was interested,” said Rabbi Berel Lazar, the Lubavitch chief rabbi of Russia. “He said we’re going to invest and bring them back to Judaism.”

According to Lazar, Rohr was especially passionate about restoring synagogues that had been seized during the Soviet period, and he contributed to everything from building campaigns to providing hot food after synagogue services. Most notably, he committed himself to pay the salaries of rabbis in cities that otherwise could not support them. According to a 2006 JTA report, the Rohr family had underwritten the salaries of some 500 Lubavitch emissaries around the world.

While much of Rohr’s philanthropic efforts were directed at religious organizations, family and friends also spoke of him as a widely cultured person who enjoyed secular pursuits. “For my grandfather, the real common theme was Jewish literacy, and that was in both religious and cultural manifestations,” said his granddaughter, Rebecca Rohr.

It was in that spirit that his children honored him in 2006 with the creation of the Sami Rohr Prize, which is awarded by the Jewish Book Council and “recognizes the unique role of contemporary writers in the transmission and examination of the Jewish experience.”

“They’ve really helped change the face of Jewish literature over the past six years,” said Carolyn Starman Hessel, director of the Jewish Book Council. “Even in business, he liked to help youngsters, and this award is supposed to go to an emerging author.”

“I think the prize also reflected not only the sensitivity and goodness of his children, but also what their father was about,” Lassner added. “It reflected a concern for the Jewish people at large and the future of Jewish culture. If you think about it as a successful businessman, the return will be incredible.”

Sami Rohr, Philanthropist Who ‘Invested’ Millions in the Jewish People