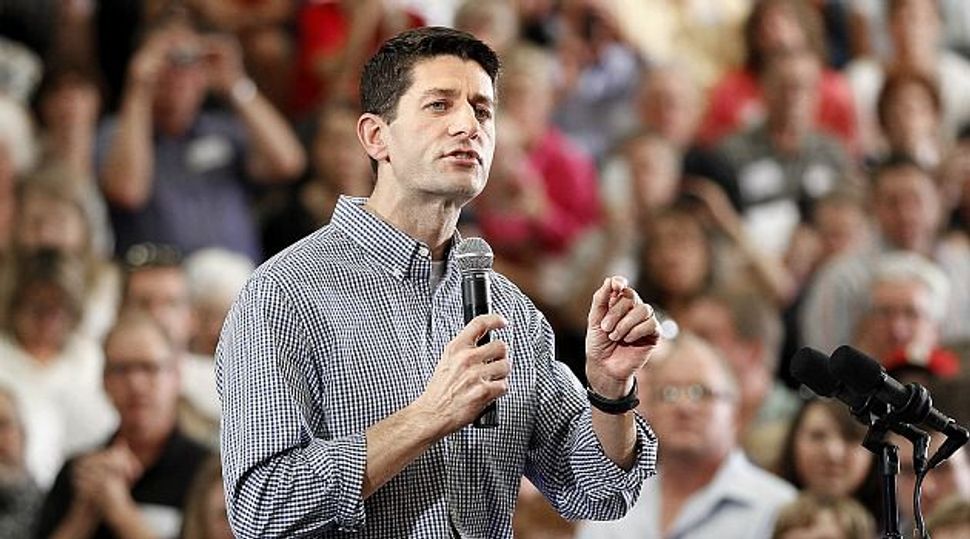 Changing the Subject: Paul Ryan?s pick as the Republican vice presidential candidate means Jews in Florida are talking about, well, Paul Ryan, and his plans for Medicare and other entitlement programs. That could shake up the presidential race in the crucial battleground state. Image by getty images

Paul Ryan’s arrival on the Republican presidential ticket is changing the subject among Florida Jews — and that could be good news for President Obama.

For months, Republicans have worked to win Jews in the key swing state with their critique of Obama’s perceived less-than-robust support of Israel. But Mitt Romney’s selection of Ryan turns the focus to the GOP rising star’s proposed cuts to entitlement programs like Medicare, the federal health care program for the elderly on which many Florida Jews rely.

A pitched battle over Medicare in Florida is one that Democrats think they can win hands down, especially among Jewish voters.

“Romney has made my job much easier,” said former New York City mayor Ed Koch, who plans to campaign for Obama among Florida Jews this fall. “Israel is no longer the issue…. It has now shifted, and Romney shifted it.”

Ryan’s plan for Medicare, which Romney has avoided endorsing, would result in substantial cuts in the program. Republicans say that the only other option is insolvency. They note that any changes wouldn’t impact current Medicare recipients.

Republicans insist that Democrats are engaging in “scare tactics” to drum up support from elderly voters, a strategy GOP operatives predict will backfire.

“We don’t think it’s a liability at all,” said Brad Herold, campaign manager for Florida Republican congressional candidate Adam Hasner. “[B]y picking Paul Ryan they made it very clear that those are the issues we want to talk about.”

The stakes couldn’t be higher across the country, but particularly in Florida, a crucial battleground state. Most analysts say Romney must win the state’s 29 electoral votes to have a realistic chance of unseating Obama.

Jews make up 3.4% of Florida’s population. That doesn’t sound like much, but it’s a greater proportion than in any other swing state. And given the state’s history of razor-thin elections (think Bush vs. Gore in 2000), it potentially could swing the election.

Republicans hope they can chip away at Democrats’ traditional huge margin among Jews this year. The GOP has spent months forcefully challenging Obama’s positions on Israel with South Florida Jews, to varying degrees of success. As the Forward [reported](https://forward.com/articles/150578/obama-muslim-fears-gone-but-israel-anxieties-remai/?p=all] in January, many Republicans on the ground in South Florida had harsh critiques of Obama’s Israel policy.

Ryan’s entry into the presidential ticket has handed the Democrats an opportunity to change the subject.

An early sign of their strategy surfaced just a little more than an hour after Ryan and Romney first appeared together on the campaign trail. At 10:43 a.m. on August 11, Lois Frankel, the Democratic nominee for Congress in Florida’s heavily Jewish 22nd Congressional District, issued a press release slamming Hasner, her Republican opponent, for backing Ryan’s Medicare plan.

Frankel and Hasner are competing over a newly drawn district in Broward and Palm Beach counties, the heart of Jewish South Florida. Both of the candidates are Jewish.

Frankel said in an interview with the Forward that she had always planned on attacking Hasner over his support for Ryan’s Medicare cuts. But she added that Romney’s pick of Ryan for the vice president slot was a political gift that could significantly boost the profile of the issue.

“For me, it was going to be a top-line issue because of the nature of the demographics in my district,” Frankel said of the Medicare issue. “Most people weren’t paying attention to what the Ryan plan is, but now people will know.”

The debate over how to reform Medicare is a complex one, and the details are obscure to even the most engaged voters. Democrats note that Ryan’s plan would eventually leave elderly people paying for a greater portion of their own health care. Republicans counter that Obama’s health care reform plan also slows growth in Medicare spending and that Ryan’s plan would not change Medicare benefits for anyone currently 55 or older.

“If the Republicans do a (good) job telling people what’s in Obamacare as it relates to Medicare and what’s in Ryan’s plan, people will be able to make an intellectual decision between two complex issues,” Bogdanoff said.

One GOP Jewish voter in South Florida, Adele Lurie, 69, told the Forward that she supports Ryan’s plan. She called it the only viable alternative for her children and grandchildren.

“If Social Security goes broke and Medicare goes broke … I don’t see how that’s a bright future for them,” she said.

Another South Florida Republican, Jack Davidson, 80, reached via telephone at his summer home in Ohio, where he votes, said he likes Ryan. But he feels he needs more information on Ryan’s Medicare proposals before Election Day.

Shelley Siegel, 52, a volunteer with the Obama campaign who lives in Boynton Beach, Fla., said there’s no doubt the Ryan pick will hurt Romney’s chances of making inroads with Florida Jewish voters.

“Before it was discussions about Israel,” said Siegel. “But now the focus really becomes Medicare and Social Security – what you have and what you want your children to have.”

In an interview with the Forward, Koch scoffed at the notion that people over 55 shouldn’t care about Ryan’s proposed changes to Medicare because they won’t affect them.