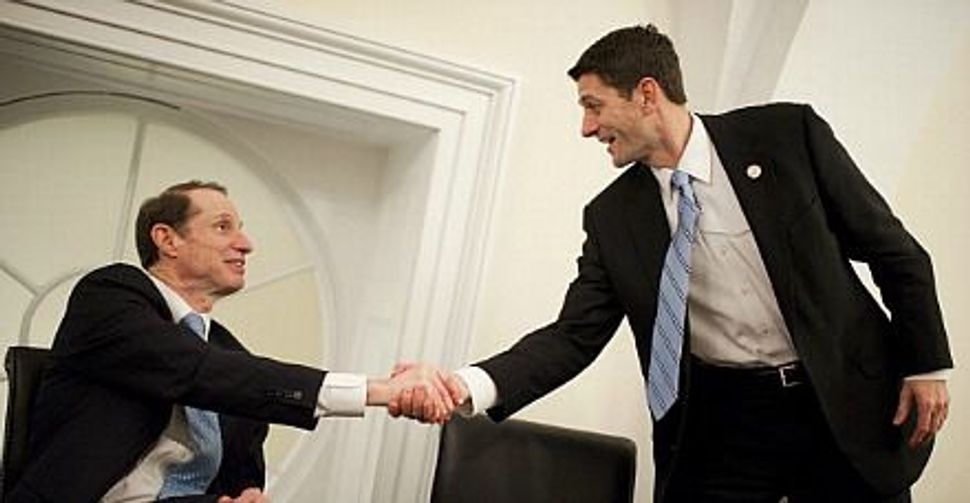 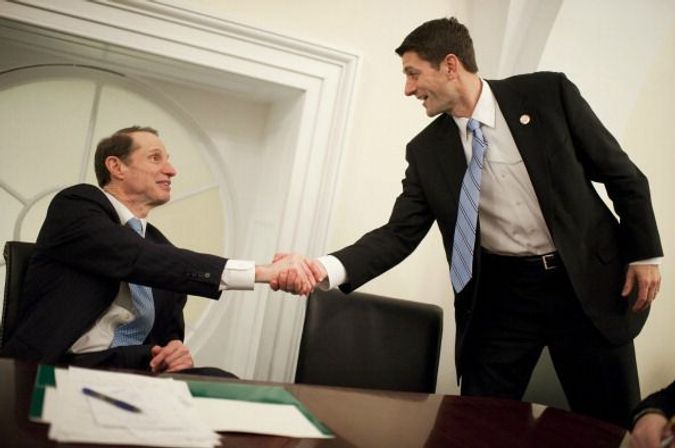 One Jewish Democrat’s attempt to reach across the aisle is now coming back to haunt him, as political rivals cite Senator Ron Wyden’s work with Paul Ryan as a sign of bipartisan endorsement for the new Republican vice presidential candidate’s ideas.

Wyden, Oregon’s senior senator, is a liberal known to break party ranks for causes close to his heart and was the only Democrat to partner last year with Ryan in an attempt to reform Medicare, the entitlement program providing health care for nearly 50 million seniors. Now, however, Wyden is seeking to distance himself from the proposal put out by Mitt Romney’s running mate.

Nevertheless, Wyden does not contest that their joint effort saw him working closely with Ryan for months on an issue both saw as crucial for their own reasons. And beyond this, there is something else that joins them that neither would likely be eager to acknowledge.

In their willingness to partner across party lines on Medicare, Ryan, who is Catholic, and Wyden also challenged the consensus positions of their respective faith communities, both of which oppose cutting health care plans for the elderly.

“Although many of us had very positive interactions with Senator Wyden, his position on this issue was out of sync with the community and with the majority of community organizations,” said Hadar Susskind, director of Bend the Arc, a liberal Jewish advocacy organization.

Polling data support the notion that American Jews are not open to cutting government investment in Medicare. A 2005 wide-ranging survey found Jews to be the religious group most supportive of increasing government spending on health care. In more recent polls, Jews placed their concern over health care as one of the top factors in deciding who should get their vote.

According to the plan presented by Ryan, who chairs the House Budget Committee, instead of having the government pay for seniors’ health care costs through Medicare, they will be provided with vouchers to use for purchasing medical insurance from either Medicare or private insurers. But the vouchers are not designed to keep up with annual health insurance premium increases over time. And the costs that exceed the allowance would come out of the seniors’ pockets. The rationale behind Ryan’s plan was to introduce competitiveness into the program in the hope that it would decrease costs and rein in the growing expense of health plans.

Jewish organizations have spoken out against Ryan’s proposals, which would affect many seniors in the community. The federation system of Jewish social service agencies that serve many of those seniors also relies heavily on funding from Medicare and Medicaid to do so.

Last April, the Jewish Federations of North America, a community umbrella organization, and the Jewish Council for Public Affairs wrote a letter to members of Congress, urging them to oppose reforms such as those offered by Ryan. “Major entitlement programs,” the letter stated, “protect the health and economic security of our most vulnerable citizens.”

Wyden declined to make himself available to the Forward for comment on how his Jewish values have interacted with his thinking on Medicare.

As for Ryan, he, too, took a stance opposed to the consensus position of his faith — though, the church being the church, that consensus is officially articulated by its religious leadership. The United States Conference of Catholic Bishops, reacting to Ryan’s remark that his budget proposals were shaped by his Catholic beliefs, sent a letter to Congress, arguing that the plans fails to meet “moral criteria” because of the cuts it proposes to programs serving the poor and vulnerable.

Ryan’s views on abortions and religious rights are in full accord with those of the Catholic Church, but on economic issues the church leadership in the United States has traditionally supported a robust social safety net.

For Wyden, joining forces with Ryan to compose the Medicare reform proposals later known as the Ryan-Wyden plan was an opportunity to offer a practical solution for an entitlement program whose costs are growing out of control. “Wyden-Ryan doesn’t privatize Medicare because Medicare beneficiaries already have the option of enrolling in private health insurance plans,” Wyden argued in an article published in March. “Wyden-Ryan makes those private plans more robust and accountable by forcing them to — for the first time — compete directly with traditional Medicare.”

Wyden has focused much of the work he does on Capitol Hill on tackling health care issues and working for seniors, a passion he’s been carrying since his early years in public service. He strongly supported President Obama’s Affordable Care Act and, despite his Medicare reform work with Ryan, he ended up voting against Ryan’s broad budget plan, of which the Medicare reform was a part.

In public comments he has made on the issue, Wyden explained that he still thought the ideas raised in his joint proposal with Ryan on Medicare would help save that program. But he adamantly opposed Ryan’s approach to Medicaid, which funds health care for low-income Americans, and nursing home costs for hundreds of thousands of middle-class elderly after they have spent down their assets. Ryan’s budget plan would have turned Medicaid into a “block grant” program — at substantially reduced levels — in which states could cut services for recipients. And Medicare reform, according to Wyden, could not survive without a viable Medicaid plan that would take care of the neediest seniors.

Wyden, 63, has been in Congress since 1981, first as a House member and for the past 12 years as senator from Oregon. His parents fled Nazi Germany and settled in Wichita, Kan., where Wyden was born. He grew up in California and entered politics at the age of 31. Ever since, Wyden has been known for his independent approach to party politics. While falling in line with the Democratic progressive camp on many issues, including staunch opposition to the Iraq War and support for abortion rights, he defied Democratic leadership in criticizing Obama’s stimulus plan and voting with Republicans on certain tax issues.

“Senator Wyden has always been supportive of issues that concern the Jewish community, and health care is one of them,” said Marc Blattner, president and CEO of the Jewish Federation of Greater Portland. “But,” he added, “one of the things about Wyden is that he is always open to looking for solutions across the aisle.”

Blattner described Wyden as a frequent participant in Jewish events organized by the 45,000-member local community. He is also a regular at national Jewish gatherings and has been a strong supporter of Israel-related legislation endorsed by the American Israel Public Affairs Committee.

Romney’s selection of Ryan for the second spot on his ticket has turned the media’s klieg lights on Ryan’s call for Medicare reform. But while the Wisconsin Republican has enjoyed the attention, his former partner in shaping the plan now finds it a political liability.

Republicans, Romney included, have used Wyden’s past support for Ryan’s plan as a cover against Democratic attacks on the Medicare reform idea. Ryan, Romney said, has “found a Democrat to co-lead a piece of legislation.” In praising Ryan’s Medicare plan, Romney said Ryan and Wyden “have come together,” and this, according to the Republican candidate, “is the kind of bipartisanship we need more of, not less.”

An angry Wyden was quick to issue a statement calling Romney’s remarks “nonsense.” Wyden said he did not co-lead the legislation. He noted that eventually he voted against Ryan’s proposals. “Governor Romney needs to learn you don’t protect seniors by makings things up,” Wyden added, “and his comments today sure won’t help promote real bipartisanship.”