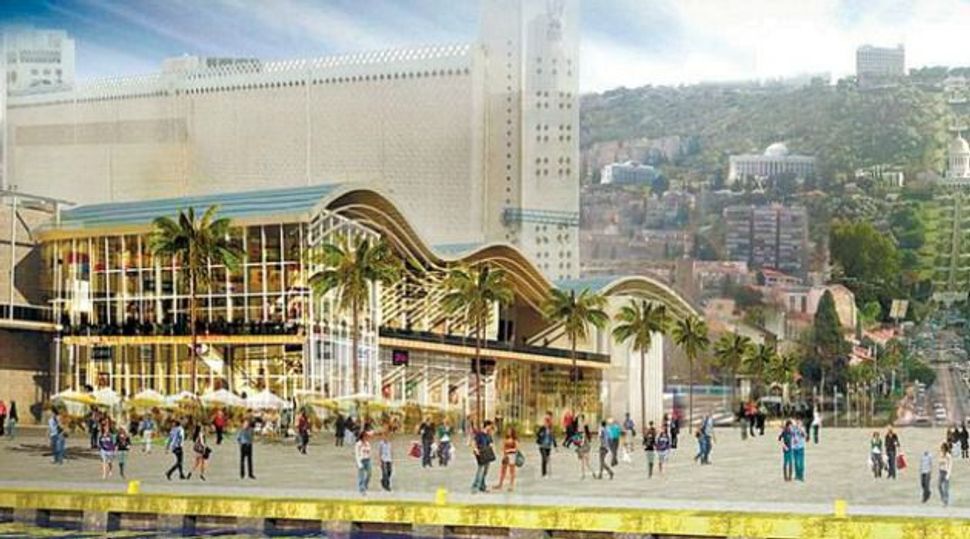 Stroll by the Sea: Plans are afoot to transform Haifa’s gritty port into an entertainment destination. But some hurdles remain. Image by Amir Mann/Ami Shinar Architects

The Haifa municipality views July as a historic month: The National Planning and Building Council finally approved a plan to evacuate part of the cargo port in the lower city and transform it into a lively center of entertainment and shopping. This decision will transform Haifa into Barcelona – with the help of a NIS 1 billion investment, city hall says.

The municipality even put out a press release with impressive computer drawings demonstrating the potential of the project. But some very powerful players are casting doubt on the chances that Haifa will become Barcelona anytime soon.

This isn’t the first time the national planning council has come out with such an announcement. The same thing happened five years ago, when National Master Plan 13/3 for the coastline of Haifa and Tirat Hacarmel was approved. Construction under that plan, which is linked to the new plan just approved for the port, was supposed to start right about now.

But in fact, that July meeting where the port project was approved was actually called to postpone the plan approved five years ago. True, the municipality is continuing to plan the beach area involved. But various government ministries insist that the operation of the cargo port is more important to the economy – and therefore, it shouldn’t be moved right now.

Moreover, at no time during the past five years has either the state or the city opened negotiations with the port workers over the move. This is essential, because the employees received rights to the land occupied by the port as part of the port reform pushed and signed by then Finance Minister Benjamin Netanyahu in 2005.

The Israel Ports Company is demanding a 15-year postponement of the cargo port’s relocation. The city initially agreed to only a 90-day delay. But in the end, it agreed to put off the start of the project for two years.

None of these facts was mentioned in the press release, however.

The comparison to Barcelona is actually quite appropriate, and instructive. There, too, a cargo port operated at the end of a famous city boulevard, La Rambla. Some 25 years ago, the city started to evacuate this port, partly in preparation for the Olympic Games to be held there. The port was transformed from a threatening and inaccessible industrial area to a center of tourism and night life.

Haifa wants to copy this model on Ben-Gurion Boulevard in the lower city, at the foot of the magnificent Bahai Gardens. The view from the famous gardens would then no longer be a container port, but a pedestrian boardwalk with shops, restaurants and hotels.

But there is a dark cloud hanging over the transformation of the port area: Even a 2009 agreement with the Ports Company on the immediate construction of a few coffee shops has yet to be implemented.

The views of various government ministries also conflict with the city’s rosy promises as to the timeline. “Anyone who says that Haifa will turn into Barcelona is only stating his own opinion,” said one government official involved in the matter.

The state and the port workers view the plan to relocate the port – which is the largest employer in the entire metropolitan region – as a direct threat to the port’s operations. A fight has been raging in recent years over which of Israel’s two main ports, Haifa and Ashdod, should be expanded and developed. The discussions are moving forward very slowly, and the state’s plan is for the winning port, the one to be expanded, to be privatized.

But the employees of Haifa Port are unwilling to give up any of their livelihood – and they are part owners of the land on which the container port sits. The union claims clearing the area would remove 30 percent of the port’s operating space and lead to 400 layoffs.

And this week, the Histadrut labor federation gave the port workers the green light to declare an official labor dispute.