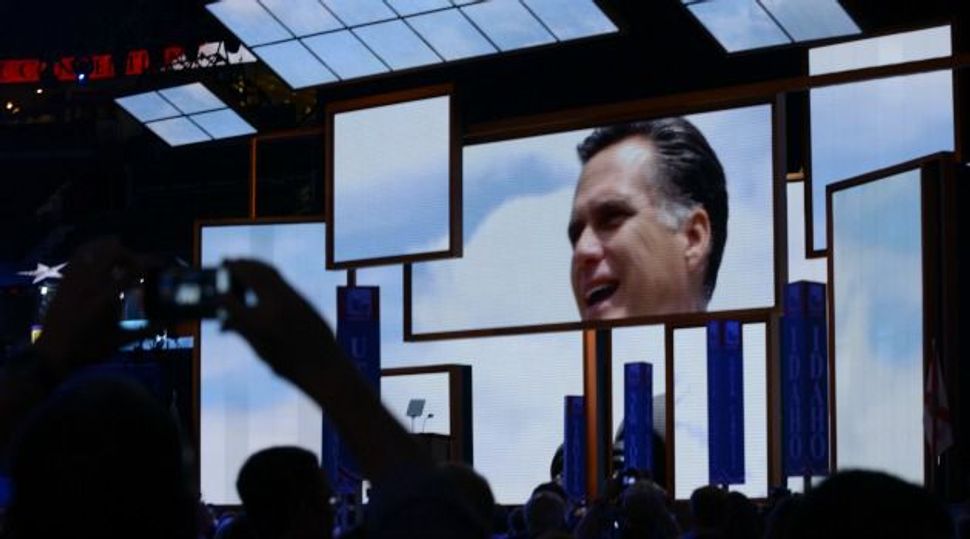 Gathering GOP: Delegates at the Republican Convention watch a video about Mitt Romney as the gathering came to life. Image by getty images

Tropical storm Isaac did little to dampen the spirits of Republicans gathered for their nominating convention in Florida, and once the skies cleared and gusty winds died down, politicking was back in full force.

The three-day truncated convention, opening Tuesday in Tampa, has been described by commentators as Mitt Romney’s chance to reinvent himself by presenting a more likeable face to the American people. For Jewish Republicans, it is an opportunity to drive home a couple of messages they believe can help Romney win over a bigger slice of the Jewish electorate. There are also a series of Jewish-related events, from Rabbi Meir Soloveichik delivering the opening night invocation, to behind the scenes appearance by top donor Sheldon Adelson.

Republican activists speak of breaking the 30% mark in Jewish support in the upcoming elections. Democrats have admitted they might face a slight erosion in Jewish support from the 75%-plus share that Barack Obama took in 2008.

A key message for Jewish Republicans at the convention will be advancing the image of Mitt Romney as more supportive of Israel than Obama. Helping to make the point will be several events hosted during the convention by the Republican Jewish Coalition, including a “Salute for pro-Israel Elected Officials” and an event honoring Republican governors. Former U.N. ambassador John Bolton, a leading voice in the hawkish end of the pro-Israel spectrum, will also brief Jewish Republicans.

But a couple of events that had grabbed the headlines in recent days have made Jewish Republicans’ job just a bit more difficult.

First was the prominent role played by libertarian Ron Paul just before the convention officially kicked off. Paul, a former presidential candidate, held a rally in Tampa in which he accused “neo-conservatives” and “special interests” of pushing American foreign policy in the direction of overseas intervention. Paul is a well known critic both of Israel and of America’s support for the Jewish State.

Paul was not allowed to speak at the convention but organizers did include a tribute to the Texas congressman in the convention program. This was enough for Jewish Democrats to attack the GOP and for honoring the Israel critic. Jewish Republicans chose to look at the half full glass, pointing to organizers’ decision not to give Paul a speaking slot on stage.

Another issue that could potentially hurt Republicans among Jewish voters is the renewed discussion on women’s rights following Missouri Senate candidate Todd Akin’s remarks on rape and abortion. Jewish Republicans are considered to be on the moderate end of the party on social issues and are likely to take offense of such remarks.

A widely-ignored but formally required part of any convention is the adoption of a platform for the party. In discussions leading up to the convention, Republican moderates have managed to revise some of the language in the proposed platform which sought to change the party’s support for two state solution for the Israeli–Palestinian conflict. The GOP has long supported a two-state solution, although its leaders in recent years have made a point of not pressuring Israel to compromise on this issue.

With all the discussion on policy issues, domestic and foreign, the single most important moment for Jewish voters expected in GOP convention could be the participation of Sheldon and Miriam Adelson at the gathering. The Jewish power couple, a casino mogul and his Israeli-born wife, have emerged as the most significant donors on the Republican side, vowing to give up to $100 million through their Super PAC in order to defeat Obama.

Sheldon Adelson, who is also a key supporter of Israeli prime minister Benjamin Netanyahu, has made no secret of the importance he sees in having Republican candidates display hawkish views on issues relating to Israel.

Conventions are also a wonderful opportunity for activists of all sorts to show their force and gain some attention. The new progressive Jewish alliance, Bend the Arc: Jewish Partnership for Justice, will try to make itself noticed with a stop in Tampa of its eight-state tour titled “If I were a rich man.” The group activists are targeting 11 members of Congress, most of them Republican, who oppose allowing the Bush-era tax cuts expire for families earning more than $250,000.

The American Jewish Committee is hosting several panel discussions focusing on issues dear to the group such as interfaith relations (with a panel on Jewish-Mormon ties), Jewish–Latino relations and a discussion on American interests in the Middle East.

The convention is a prime arena for the American Israel Public Affairs Committee, the largest pro-Israel lobbying organization. Top AIPAC officials are out in force in Tampa, meeting with elected officials and delegates. But the group has decided to maintain a low profile and did not respond to Forward inquires regarding its activities.