App-arently, It Could Be Easier to Grab a Cab 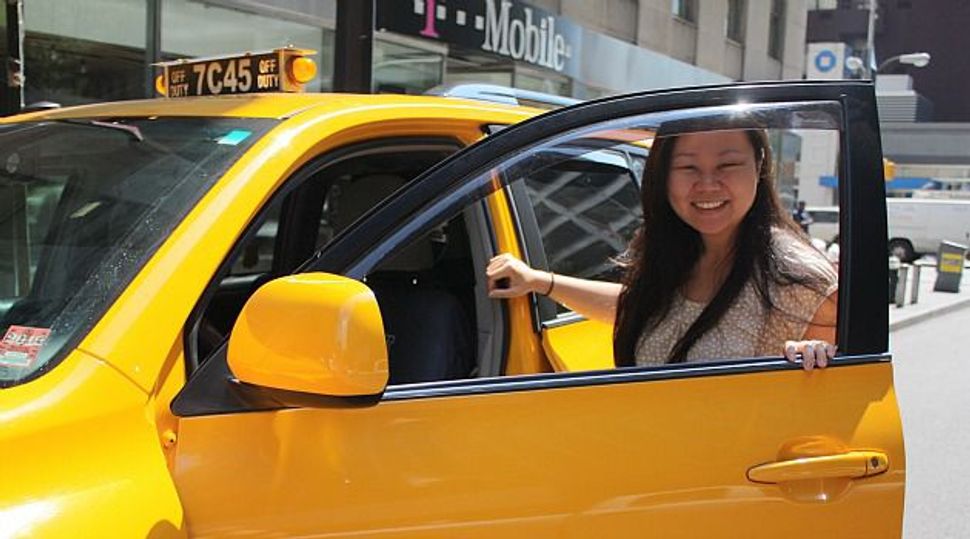 Flagging Interest: Jing Wang Herman is the local head of GetTaxi, an Israeli company vying for the right to be New York?s official cab-hailing app. Image by andrea palatnik

As those who live in the city will tell you, anyone who thinks New Yorkers can catch a New York cab in a New York minute does not live in New York.

But now, the city’s Taxi & Limousine Commission is set to award an exclusive contract for a cab-hailing app with a receiving device that will be installed in all city taxis. The smartphone app, with its plethora of features, promises to revolutionize that quintessential New York experience of cabbing it when time is urgent and you’re running late.

Among other things, the app will allow individuals seeking a cab to alert any taxi driver within the vicinity that they are on the street and ready to board. Potential passengers who are near each other and heading in the same general area will also be able to find each other with this app and share a ride. The app will also allow customers to pay for the fare without ever touching their wallets, recover lost items and even rate a driver’s performance behind the wheel.

It’s the TLC’s way of trying to stay ahead of the companies’ plans to introduce their apps to New York taxi drivers on their own, while trying to preserve what it can of the decades-old TLC rule that forbids yellow cabs from taking remote pick-up requests from riders.

This being New York. there is, of course, a Jewish angle to the bidding contest for this lucrativefranchise: Jews run three of the companies reported to be under top-tier consideration. Each of the three has its own unique Jewish story. Collectively, they also reflect the heavy involvement of Jews in the burgeoning field of developing practical new software apps.

One of the companies, GetTaxi, is based in Israel. Its founder, Shahar Waiser, was born in Moscow and made aliyah at age 15, leaving his parents behind. Waiser finished high school in Tel Aviv while living in immigrant housing. He joined the Israeli Army soon after. There, while working for the army’s technology division, Waiser founded a startup listing classified ads for real estate and cars, the first of six firms he has founded so far. GetTaxi, which opened in April 2010, operates in Israel, Russia and the United Kingdom — and, soon, too, Waiser hopes, in New York.

“If we could change the way taxi drivers behave in Israel, we can do it everywhere,” Waiser said. He noted that his app seeks not only to make passengers’ lives easier, but also to change the whole experience of using taxis as a means of transportation.

Waiser recruited Jing Wang Herman to be the face of GetTaxi in New York. Born in China, she is married to Matthew Herman, a noted Jewish chess prodigy, and is in the process of converting to Judaism. Herman, 30, gave up a promising career in finance to, in her own words, follow an old-time passion. She admires taxi drivers for their freedom — “New York City is their office” — and for how knowledgeable they are about the city.

“To me, to be a New Yorker is to know New York like the back of your hand, and I think cab drivers are at the top of that list,” said Herman, who is the CEO of the U.S. division of GetTaxi.

Herman said she “had a vision” about a more efficient system for New York cabs in 2009, while still working for JPMorgan Chase & Co. She decided to apply for a taxi license so she could take a closer look at the market. She still drives a yellow cab a couple of nights a week.

Herman immigrated to Texas with her parents at age 10, eventually coming to New York to attend college. Herman said her interest in Jews long preceded her marriage, or her work for an Israeli firm.

“I’ve been to Israel seven times, and the first six I wasn’t even working for GetTaxi,” she said.

Another strong contender for the lucrative app monopoly is Hailo, established in London by New York-born Jay Bregman. In less than two years, the company has expanded to Chicago, Boston, Toronto and, most recently, Dublin. Six thousand of London’s 23,000 cab drivers have signed up with Hailo so far, Bregman said, and 50,000 customers have used the service since it was launched in London’s iconic black cabs.

The app “looks at the driver side of the equation,” according to Bregman. Among other things, Hailo features a social network that enables drivers to interact with each other and share information about traffic and hot spots.

“We know the value of time efficiency,” Bregman said, “and this is a way to put a customer and a cab together in less than two minutes.”

If GetTaxi’s Herman is obsessed with cabs, for Bregman it’s the pure technology of public transportation. As Bregman tells it, he “fell in love” with technology very early in life thanks to his father, a New York surgeon. “My father saw that technology would be the next big thing, and made sure I’d always have the latest computers at the time,” he recalled.

According to Bregman, more than 1,000 cabbies have already filled out Hailo’s application to use the upcoming New York City app.

Another reported favorite in the TLC’s competition is Uber, which was founded in San Francisco and currently operates in more than 15 cities in the United States, Canada, France and the United Kingdom.

The author of Uber’s New York proposal is Josh Mohrer, the company’s general manager, who was born and raised in the Forest Hills section of Queens. Like his competitors, Uber refrained from releasing specific details of its New York app, but Mohrer said the project is similar to the successful model Uber has applied to busy metropolises like Chicago, Paris and Toronto.

“We see technology as a way to help you find yellow cabs,” Mohrer said.

The TLC is expected to announce the winning bid for its contract in November, and the new app should become available for download next spring.

App-arently, It Could Be Easier to Grab a Cab