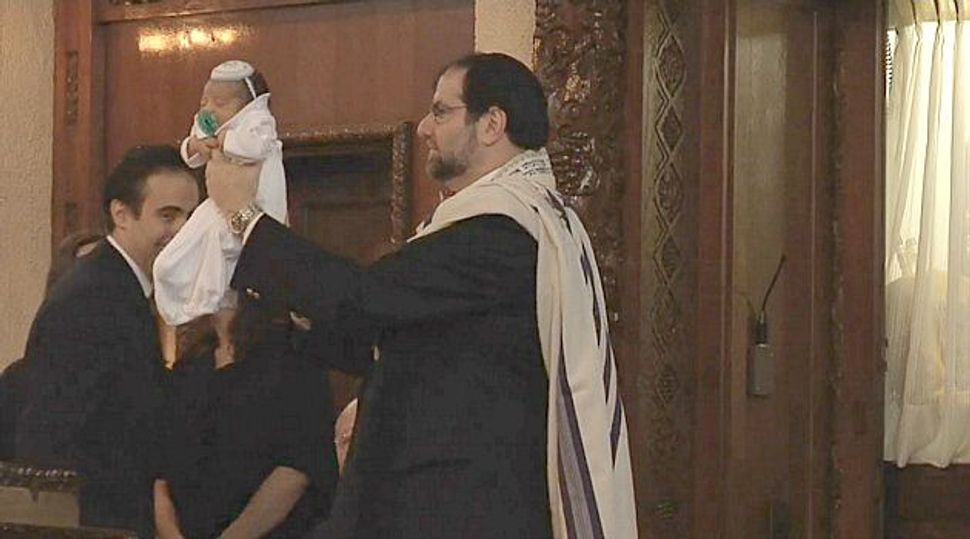 Isaac is cradled in his grandfather’s arms. In the space of a few minutes, the Orthodox ritual circumciser, or mohel, separates the foreskin from the head of Isaac’s penis, pulls the skin forward and inserts a metal shield that protects his penis while his foreskin is cut off. No anesthetic is used.

Meanwhile, Joseph is strapped down to a special mattress by a Reform mohel who injects an anesthetic into the base of his penis. During the following 10 minutes, the tip of his penis is covered by a bell-shaped clamp; the foreskin is sliced, pulled back over the clamp and cut off.

At such a young age, do Isaac or Joseph feel pain? And if so, how do their circumcisers feel about the pain they inflict? Are there moral issues in play here? Are some methods of circumcision more humane than others?

As Europeans and some Americans debate the acceptability of circumcision, the question of pain has surfaced as one of the key reasons opponents cite to ban this ancient religious practice. Those who perform Jewish ritual circumcision — brit milah — say they are concerned about pain, too, but have very different methods of minimizing it, depending on religious denomination.

Proponents of circumcision were given a major boost in August, when the American Academy of Pediatrics released its revised guidelines on male circumcision, stressing the medical benefits of the procedure in reducing the incidence of urinary tract infections and sexually transmitted diseases, including HIV.

But the AAP guidelines also stressed the importance of “effective pain management,” particularly local anesthetic or anesthetic creams, neither of which is used regularly by most Orthodox mohels. Nonmedical techniques alone, the AAP guidelines said, “are insufficient to prevent procedural and postprocedural pain and are not recommended as the sole method of analgesia.”

Physicians, a number of whom practice as Reform mohels, say there is no question that infants feel pain. Reform mohel Steve Lerman, a pediatric urologist at University of California, Los Angeles, says that studies during the 1980s and ’90s showed that every pain indicator — heart rate, breathing rate, crying — is heightened in infants circumcised without anesthetic.

“There absolutely is anguish and pain that can occur from this,” Lerman said, “and any schmuck who tries to tell you they’re too young, they won’t feel it — that’s a bunch of bulls–t.”

Lerman, who performs secular circumcisions at UCLA Medical Center and ritual circumcisions in people’s homes, uses anesthetic every time. First he secures the baby into a circumstraint, a foam board with straps to hold down arms and legs (Lerman says he uses only the leg restraints). He injects Lidocaine into the base of the baby’s penis at the front and back. After about 10 minutes, when the area is numb, he fits a device called a Gomco clamp over the penis. Over the next 10 minutes, he performs the procedure.

“It takes a skilled set of hands,” he said.

Lerman could use a different device called a Mogen clamp, which is more commonly used by Orthodox mohels. Mogen clamps allow the circumciser to work faster, but they leave the head of the penis exposed. On the rare occasion a Mogen clamp circumcision goes wrong, the tip of the penis can be amputated, as it was in a recent case in Los Angeles when a boy lost 85% of the top of his penis. (In that case, the botched operation was a secular procedure performed by a physician in a hospital.)

Because the Gomco clamp takes so long, many Orthodox mohels view the use of it as cruel. They even oppose the injection of local anesthetic. “Forget about an injection,” said one Orthodox mohel, who has practiced in New York for 50 years. “You don’t want to do that to a child. That’s a terrible, painful process.”

Like many of his peers, the mohel, who did not wish to be named, uses a shield device inserted between the head of the penis and the foreskin. From start to finish, the operation is over in a few minutes.

Because he is not a physician, the Orthodox mohel cannot inject anesthetic into the baby. Instead, he can use an anesthetic cream, which he said he tries to avoid unless a parent demands it. The mohel said the “long-term effects” of the cream are unclear. Besides, he said, “the process takes a few seconds, and the cut is so swift and so sharp, there is no chance for the child to experience much pain.”

“Any discomfort seems to be very, very fleeting,” said Shmuel Goldin, president of the Rabbinical Council of America. “We certainly don’t want to impose pain on any child. [But] this is a fundamental ritual, critical to our religious practice. It has been practiced for thousands of years with no ill effects, and we are comfortable taking that approach.”

Of local anesthetic, Cantor Philip L. Sherman, also an Orthodox mohel in New York, said, “Injecting a baby for a penile block is probably one of the most ridiculous things I’ve ever come across, because injection in and around the base of the penis is so painful, you may as well just do the bris.”

Sherman, like most Orthodox mohels, gives a baby concentrated sugar water before the procedure and kosher sweet wine or grape juice afterward. He said anesthetic creams are not designed for 8-day-old infants. The creams also make the surface of the penis greasy. “I need a dry surface so I can grab [the penis] without fear of slipping,” Sherman said.

Both Orthodox mohels cited unnamed physicians, including anesthesiologists, pediatricians and pediatric urologists, who warned them off topical anesthetics.

Of the Gomco clamp, Sherman said: “It’s an extremely painful procedure — much, much more so than the shield or a Mogen clamp. That’s why people are clamoring for anesthetic.”

“If you want the most pain-free and best bris,” Sherman added, “use a real mohel, a traditional rabbi or cantor mohel, properly trained, religiously observant, who does these things properly.”

Despite the mohels’ dueling ideas about how to perform the best bris, Paul Wolpe, professor of bioethics at Emory University, said the fact that they are each committed to minimizing pain is proof that the ritual aspect of circumcision does not override the importance of minimizing suffering.

But, Wolpe added, perhaps people have become too sensitive to pain. Parents inflict all sorts of discomfort on their children, he said, from vaccinations to having cavities filled. People have become too willing to sacrifice what they believe in “on the altar of not causing even transient pain,” he said.

The transience of pain is particularly relevant with circumcision, which is performed when an infant is so young that it is not even clear what kind of pain the child experiences. Is it solely a reflexive pain that causes an emotional response but leaves no psychological aftereffects? Or is it a more recognizable pain that embeds itself in the consciousness?

Arthur Caplan, director of New York University’s division of medical ethics in the Department of Population Health, said there is a difference between pain and suffering. At one extreme is the animalistic reflex to avoid a stimulus. At the other extreme, he said, is an experience that is stored in the subconscious, “making it part of something that could harm your development and that you could flash back to.”

Science has not been able to answer quite where circumcision falls on the pain-suffering spectrum. But with the AAP guidelines pointing more strongly toward the medical benefits of circumcision, science has made it a little easier to justify.

“If you are thinking this is just a ritual to certify identity as a member of a group, that’s important,” Caplan said. “But if you think, ‘I have something here that also brings a real health benefit to the child,’ that makes the pain a bit easier to accept.”