Helping Them Return to Civilian Life 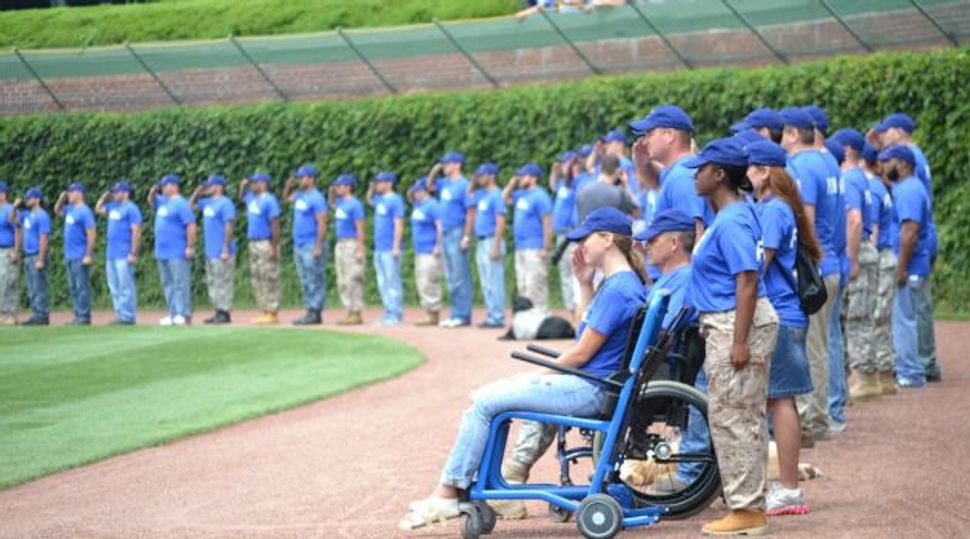 Back Home: Returning veterans are honored before a baseball game at Chicago?s Wrigley Field. Image by courtesy of the mission continues

Just before a Chicago Cubs-St. Louis Cardinals baseball game at the end of July, 100 veterans of America’s military walked onto a sold-out Wrigley Field and took a reenlistment oath. They weren’t planning to rejoin their old units.

Rather, they were committing to a six-month fellowship run by The Mission Continues, which helps returning veterans reintegrate into civilian life by volunteering at local not-for-profit organizations.

Transitioning back to civilian life can be a daunting endeavor. In addition to physical ailments and disabilities, many veterans suffer from traumatic brain injury, depression and post-traumatic stress disorder, affecting their ability to rejoin their communities.

“Most vets have people tell them, ‘Thank you for your service,’” said Eric Greitens, founder of the St. Louis-based Mission Continues. “It became clear to me that there was something else they wanted to hear; that we still need them; that we see them not just as problems, but as assets.”

Greitens, a 38-year-old decorated Navy SEAL officer is something of an anomaly. He is a humanitarian whose work in some of the most impoverished areas of the world inspired him to enlist in the military. These battlefield experiences taught him about the need to serve at a time of peace.

Greitens grew up in St. Louis. He graduated from Duke University and earned a doctorate in politics from Oxford University in England. As an undergraduate, he spent a semester in China, where he met young people who had been involved in the 1989 Tiananmen Square uprising.

He learned that “history is made by regular people…. That gave me insight into the fact that people can do something larger than themselves.”

This reinforced lessons he’d learned growing up. The product of a mixed marriage, he was raised in a Reform Jewish environment and heavily influenced by his maternal grandfather, Harold Jacobs. Education and tikkun olam, repair of the world, were core values he passed down, Greitens said.

He went on to do humanitarian work in several of the world’s trouble spots, such as Rwanda and Bosnia. There he saw that local militias stymied relief agencies. Humanitarian aid was ineffective unless it had forceful backing.

This revelation led him to join the SEALs. He was deployed in Kenya, Afghanistan and Iraq. He was awarded a Purple Heart after a suicide truck bomb hit his team in Iraq. Greitens’ wounds were minor; he was back at his post 72 hours later. But “some, just an arm’s length away from me, were more seriously wounded,” he said.

Greitens left active service in 2007, and on his return to America he visited troops hospitalized in Bethesda, Md. “All of them said to me, ‘I want to go back to my unit,’” he said. “The reality was that these men and women were not going to go back.”

So Greitens threw his Iraq combat pay into the kitty and founded The Mission Continues. The idea, he said, is to “challenge vets to serve, lead and inspire in communities across the country.”

The organization has four cohorts a year, each with between 100 and 125 participants. Each one begins with an orientation and a swearing-in ceremony such as the one in Chicago. While The Mission Continues provides guidance and a stipend — an average of about $7,200 for the six months — the burden is on the vet to find a community project, and to show up.

The organization is supported by donations from corporate heavyweights like the Goldman Sachs Group, Home Depot and Southwest Airlines, which flies the participants to their orientations free of charge.

According to one study, the program has been remarkably successful. Research by the Center for Social Development, at Washington University, St. Louis, shows that two-thirds of the soldiers in the program suffer from post-traumatic stress disorder, more than half have traumatic brain injuries and more than a quarter screened positive for depression.

The study found that more than 86% of the fellows saw the experience as “life changing.” After completing their fellowship, 71% went back to school and 86% found civilian jobs.

In recognition of his work, in May 2012, Greitens was awarded the $100,000 Charles Bronfman Prize, which honors young humanitarians whose work is “fueled by Jewish values.”

Natasha Young, a former Marine who served twice in Iraq, can attest to the program’s effectiveness. She left the service last October with a medical discharge after 12 debilitating years. She suffered through two bouts of skin cancer; she also had Lyme disease and was diagnosed with PTSD.

“I’d stopped functioning,” she said in a telephone interview. “I did the bare minimum I needed to do for my son and for people not to ask me what was wrong.”

Her brother, also a vet, told her about The Mission Continues.

At her orientation in St. Louis in January, she saw a lieutenant colonel diagnosed with cancer speak. “I felt ashamed for feeling sorry for myself,” Young said. “What I liked is that [the Mission people] challenged me. They gave me a reason not to stay home and sleep the whole day.”

During her fellowship she volunteered at a veterans center in Massachusetts. She recently completed a project planting two dozen cherry trees at a veterans’ outpatient clinic in Lowell, Mass., each tree named for a deceased veteran. For the project, she partnered with American Gold Star Mothers and coordinated the efforts of more than 120 volunteers.

“Some days are worse than others, but I just get up and fight,” Young said. She’s back in school at Northern Essex Community College, in Haverhill, Mass., and is on the dean’s list, something she still finds difficult to wrap her head around.

“Six months ago you couldn’t get me out of bed,” she said, her voice quivering.

But once a Marine, always a Marine: “Marines don’t cry. My eyeballs are sweating.”

Curt Schleier is a freelance writer and author and regular contributor to the Forward. He teaches business writing to corporate executives.

Helping Them Return to Civilian Life