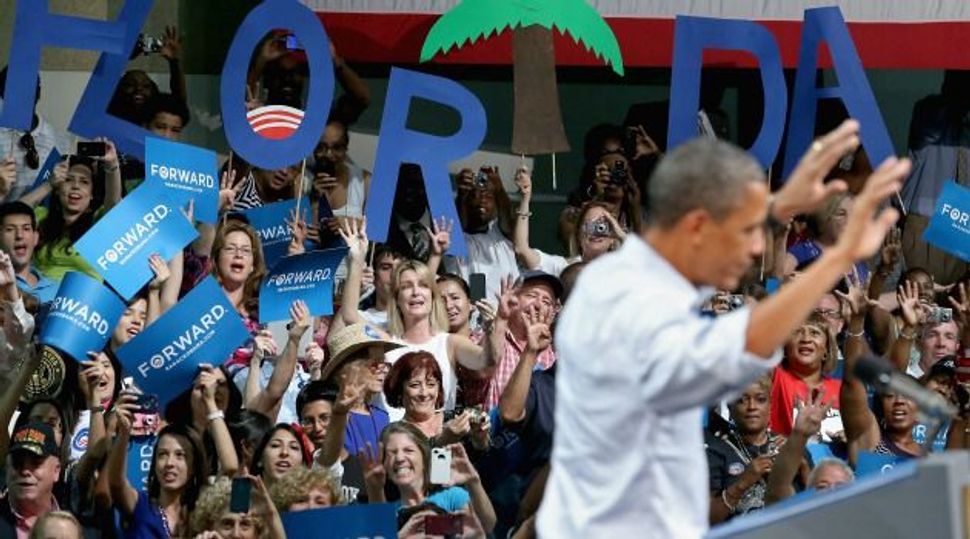 Game On: Barack Obama, shown campaigning in Florida, has history on his side as he fights for the lion?s share of the Jewish vote in November. Image by getty images

In the battle for Jewish votes this November, both parties acknowledge the other’s advantage: Republicans have the money and Democrats have the history.

The funding disparity was evident on Sunday and Monday when the Republican Jewish Coalition rolled out major voter outreach bids in three major Jewish population centers: the suburbs of Cleveland and Philadelphia, and in Broward and Palm Beach counties in South Florida.

The operations included expensive mechanisms unheard of in any Jewish outreach operation for years, if ever: Banks of volunteers phoning voters identified beforehand by researchers through “microtargeting,” a system that uses market research and other factors to narrow respondents to those likeliest to switch their vote.

The effort attracted hundreds of RJC volunteers from across the country to the three target areas in states that both parties have identified as having enough undecided Jewish voters who could decide the election. Among the volunteers were dozens of students whose hotel stays over the Sabbath were paid for by the RJC.

“This effort – both in terms of numbers of participants and scope of the effort – was unprecedented and historic,” the RJC’s executive director, Matthew Brooks, told JTA in an email.

Democrats, slightly slackjawed, said they could never match the effort, which is part of an overall push that Brooks has priced at $6.5 million.

“We will be outspent,” acknowledged Robert Wexler, a former Florida congressman and one of the Obama campaign’s chief Jewish surrogates.

Democrats have said previously that they hope to raise $1 million to $2 million for their Jewish outreach efforts.

The RJC’s efforts in suburban Philadelphia were not without mishaps. Cellphones leased for the occasion did not work for hours on Sunday because the volunteers were housed in a lower-level hotel room that did not have reception. And some door-to-door canvassers were dropped off in areas such as Blue Bell that appeared to have few Jews and where houses were adorned with Christian symbols.

Striding along the broad paths leading to double doors in the wealthy neighborhood of Gladwyne, Carol Eberwein, a 70-year-old retiree sporting a white “RJC Victory Team” T-shirt, said she had not set foot in a synagogue for four years, infuriated with her fellow Jews for handing Obama a substantial majority.

“If these damned Jews vote for Obama” this year, she said, “I’m not likely to go back.”

The RJC’s outreach overall has won national attention. Its drive includes “My Buyer’s Remorse,” a TV ad campaign targeting swing states and featuring Jewish voters who supported Barack Obama in 2008 but are now voting against the president. The same theme appears on the leaflets that volunteers tucked into mailboxes on Sunday and Monday.

“We had high hopes for Barack Obama,” they say. “Now, we have only buyer’s remorse.”

Also featured in South Florida are billboards reading “Obama, Oy Vey!” and “Had enough?” Passers-by are directed to the “My Buyer’s Remorse” website.

Democratic outreach is considerably more modest. The National Jewish Democratic Council is canvassing the same areas with volunteers handing out postcards calling the Obama-Biden ticket “the choice of American Jews.”

The NJDC’s president, David Harris, said his group could not match the RJC outreach, but that it was not necessary to do so because of the Democrats’ traditional advantage among Jewish voters.

“We start from an inbuilt advantage, that since the New Deal the vast majority of American Jews have voted Democratic,” he said.

It’s a history that Republicans acknowledge, which is why the focus is on “microtargeting” the undecided Jews who, despite their relatively small percentage, could swing the vote in closely fought states.

“Our goal is to get to those leaners,” Brooks said two weeks ago in Tampa, Fla., at the Republican National Convention when he first rolled out plans for the outreach blitz. Ultimately, he predicted, “the undecideds will shift dramatically.”

It’s an argument Democrats are taking seriously. Days after Brooks announced his plans, Ira Forman, the top Jewish outreach official for the Obama campaign, gave a PowerPoint presentation at the convention center in Charlotte, N.C., the site of the Democratic National Convention, in which he outlined what a 10 percent swing in the Jewish vote could cost Democrats. Obama is believed to have earned between 74 and 78 percent of the Jewish vote in 2008; Gallup tracking polls had him at 68 percent in July.

Should Obama’s Jewish support fall to 65 percent on Election Day, in Florida he could conceivably lose 83,500 votes, according to Forman’s chart; in Pennsylvania, 41,500 votes; and in Ohio, 19,000 votes.

In its outreach literature, the RJC stresses Israel and the threat of a nuclear Iran. The leaflet distributed to suburban homes this week is mostly about the Middle East, with the economy relegated to less than a third of the content.

By contrast, the NJDC handout is split evenly between the Middle East and other issues: the economy, health care reform and social issues such as abortion and gay marriage.

Republicans recount well-known instances when Obama has differed with Israeli Prime Minister Benjamin Netanyahu, particularly on what terms negotiations with the Palestinians should resume, and they note that Iran continues apace in its suspected attempt to build a nuclear weapon. Democrats note enhanced security cooperation with Israel, Iran’s increased isolation under Obama and the administration’s efforts to block anti-Israel efforts at the United Nations.

The emphasis on the economy and social issues makes sense for the Democrats because the gaps between Jews and Republicans are wider on domestic issues – something that the phone canvassers at the Radisson Valley Forge Hotel outside of Philadelphia discovered.

David Edman, 57, a health care consultant from Wayne, Pa., said the callers he reached on Sunday tended to want to talk more about the economy.

“It’s been about 50-50,” he said in terms of callers who were receptive to the RJC message.

“I talked to two people who said health care was their most important issue. They seemed elderly and they were leaning” toward Obama, Edman said. “I ask people to keep an open mind.”

Dara Fox, 46, a homemaker from Manassas, Va., who awoke at 4:30 a.m. to ride a bus in for the day, said she got nothing but answering machines and hang-ups after an hour of calls. She said she also encountered the economic argument against voting for Romney among her liberal Jewish friends in northern Virginia – another swing state where a shift in the Jewish vote could conceivably make the difference.

“I am at a complete loss as to how liberal Jews have taken Israel and put it in a separate bubble,” she said.

Democrats, however, are not sanguine about the prospect of Jewish voters compartmentalizing any concerns they have about Israel and focusing instead on areas of domestic agreement with Obama.

Echoing a common complaint among Obama’s closest Jewish backers, Wexler, speaking Monday to the B’nai B’rith International policy conference, said the question he hears from Jewish audiences that vexes him most is the “kishkes” question: Does Obama “get” Israel in his gut?

“I get done with the litany of 30 things the president has done for Israel, and then I get asked, ‘Yeah, Wexler, I know about all that, but in his kishkes does he really feel it?’ ” Wexler recounted, his voice rising in frustration. “Short of joining the IDF itself, I’m curious as to what President Obama could do to convince some in our community.”