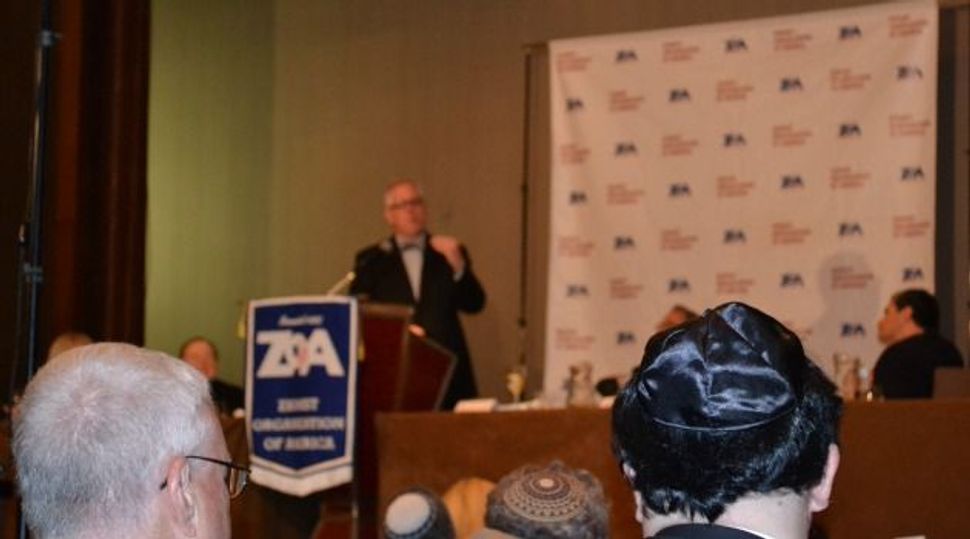 The Zionist Organization of America’s board expressed support for the continued leadership of National President Morton Klein at a meeting on September 11, hours after the Forward publicly revealed that the group had lost its tax-exempt status.

The loss of the exemption came after the 115-year-old Zionist group missed three consecutive years of Internal Revenue Service filings. The ZOA is no longer allowed to accept tax-deductible contributions.

ZOA spokesman David Drimer, the group’s national executive director, said that the sanction was the result of a “technical misunderstanding” and that the group is nearly ready to apply for a retroactive reinstatement of its tax exemption.

Charity law experts contacted by the Forward said that the ZOA’s explanation for why it missed the deadline did not exculpate the group from wrongdoing. And one board member has criticized the ZOA’s management for opposing broad public disclosure of the sanction while raising questions about the quality of the board’s oversight of the organization.

Drimer said that the lost exemption is no secret and that he talked “with numerous individuals about it every day.” He said that the group’s lawyer had asserted that the ZOA had no obligation to publicize the loss of its exemption.

The ZOA’s national board discussed the issue at a closed-door meeting in its Manhattan offices. According to the dissident board member, National Vice Chairman Steven Goldberg, the board held a vote of confidence in Klein at the meeting. Goldberg said that he was the only board member to vote in opposition to the motion.

“This was a whitewash,” Goldberg said. “They’re not interested in compliance or governance.”

A handful of board members declined to speak with a Forward reporter standing outside the ZOA building. The ZOA sent a representative to the building’s front door to discourage board members from speaking with the Forward.

An institution with roots in the beginning of the Zionist movement in America, the ZOA is now to the right of the American Jewish political spectrum. Klein has led the ZOA for the past 18 years. He is currently recovering from heart surgery at home in Pennsylvania and did not attend the board meeting.

Goldberg alleged that the board exercises little control over the ZOA. Since he joined the board in 2008, Goldberg said that he has not been shown an organizational budget, and that no budget has been distributed at any board meeting. In a phone call with the Forward subsequent to the posting of this story, Drimer said that the board has a finance committee that approves the organization’s budget.

Klein earned $1.2 million from the ZOA in 2008. Of that, $360,000 was Klein’s base compensation while $630,000 was in retirement and other deferred compensation. Drimer did not respond to a request for Klein’s salary in subsequent years.

The ZOA’s current tax trouble began in May 2011, when the organization failed to file its 2008 Form 990s, the tax documents that the IRS requires exempt groups to file annually.

All 501(c)3s must file their 990s within 11.5 months from the end of their fiscal year. Recent legislation has allowed the IRS to automatically revoke a group’s exempt status after missing three consecutive years of filings. Drimer told the Forward that the ZOA ran two years late in its filings as a matter of course, and asserted that this isn’t unusual among not-for-profit organizations.

Charity law experts contacted by the Forward disputed the idea that running two years late in tax filings was normal. William Josephson, an attorney who ran Charities Bureau at the New York State Attorney General’s office from 1999 to 2004, said that there is no legitimate reason for a tax exempt group to be filing its 2008 form as late as 2011.

“This is inexcusable,” Josephson said.

According to Drimer, the final missed deadline came as a result of a misunderstanding on the part of ZOA management and the group’s outside auditors. The 2008 990s were filed in November 2011, which the ZOA believed to be the last moment that they could be filed without the group losing its exemption. The IRS informed the ZOA in February of 2012 that that deadline had been in May 2011 and that the ZOA’s exempt status had been automatically revoked.

“It’s really just a technical, meaningless revocation,” Drimer told the Forward. Drimer, who previously worked as the associate publisher of the Forward Association, joined the ZOA after the organization had already missed the May 2011 deadline.

In an email provided to the Forward, ZOA tax attorney Tyler Korn wrote that “serious failures by the ZOA’s accountants, management and Board” led to the loss of the group’s exemption.

According to Drimer, the group scrubbed its website of claims to be a 501(c)3 once it received notice that it had lost its tax exemption. “[S]ince [February 22, 2012], we have never intentionally represented the [ZOA] as being a 501(c)3,” Drimer wrote in an email.

Klein said that he personally informed the group’s major donors of the lost exemption. “I was really scared calling some of my major people that they would respond very uncomfortably, but they didn’t, not a single one,” Klein said in a telephone interview from his home.

One current ZOA employee accused Klein of asking her to keep the loss of the tax exemption a secret. In a September 5 memo to Drimer, Goldberg, board chair Michael Goldblatt and ZOA Western Region executive director Orit Arfa wrote that Klein “has mentioned to me several times that we must remain secretive about the tax-exempt status issue.”

Arfa confirmed that she had written the memo. Goldberg said that he had distributed it to the board.

When asked about the memo, Klein said that he was feeling ill and had to get off the phone.

The group’s national website currently refers donors to an outside not-for-profit that accepts donations on the ZOA’s behalf. That not-for-profit, FJC, maintains a collective giving account unofficially tied to the ZOA. The funds in the account legally belong to the FJC, but Lenny Glickman, the FJC’s CEO, said that he expected they would be granted to the ZOA once the group regains its exempt status.

The FJC receives 2% of all donations to the fund as a fee, plus roughly 1% of the account’s total balance each year. The funds are invested in a money market account.

The ZOA disputes the notion of any potential liability. “I do not agree that the ZOA had or has an affirmative duty to broadly publicize to donors the loss of exemption,” Korn wrote in the email provided to the Forward. “I also do not agree that donors would, in general, have any valid, corresponding claim for damages against the ZOA or its Board.”

Drimer noted that Seton is a California lawyer and the ZOA is a New York corporation, and asserted that the ZOA had done nothing wrong. “We have a legal opinion from our tax attorney that the ZOA has done nothing illegal, immoral, or unethical in dealing with this situation from the time we were aware of the revocation,” he said. “There is no affirmative duty required. We didn’t keep it a secret.”

In an August 8 memorandum to Korn and the group’s leadership, Drimer outlined steps the ZOA would take to ensure future compliance with reporting requirements. The memo outlines infrastructure changes to develop consistency in bookkeeping between ZOA regional offices and announces the hiring of a full-time staff accountant.

In an email to the Forward, Goldberg condemned the ZOA and the board’s response to the ongoing crisis. “That the ZOA failed to file required information returns for three consecutive years is itself reflective of gross negligence,” Goldberg wrote. “I truly believe it is both illegal and unethical, and I expect more from the ZOA, an organization that until very recently has stood for telling the truth, even when it’s unpopular.”