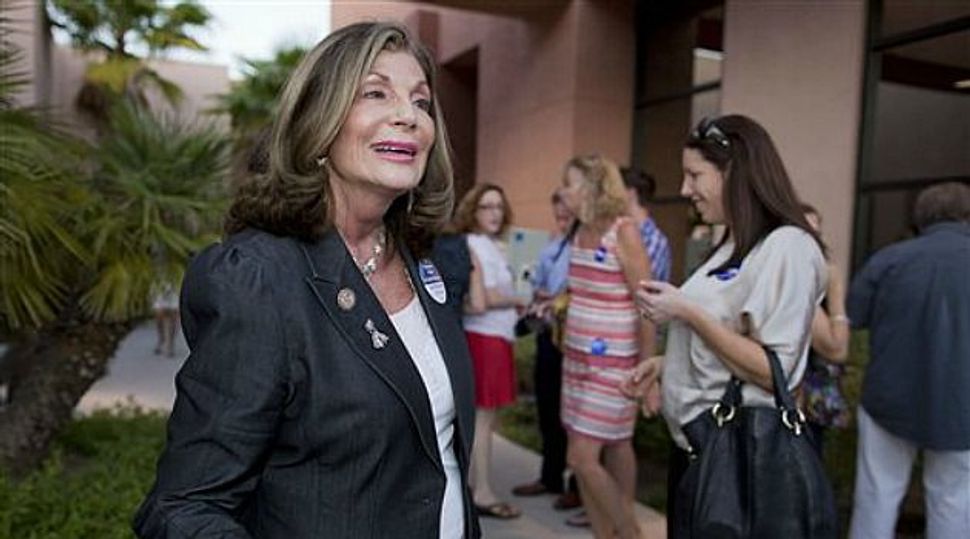 Vegas Showdown: Rep. Shelley Berkley had a safe Congressional seat. She decided to roll the dice on a run for the Senate, with control of the chamber on the line. Image by getty images

A decision to leave a safe congressional seat and run for Senate could prove risky for a leading Jewish lawmaker who has often found herself in the crosshairs of Republican mega-donor Sheldon Adelson.

Rep. Shelley Berkley, a Nevada Democrat and leading pro-Israel voice on Capitol Hill, is locked in a dead-heat race in a crucial swing state. Unlike other races involving Jewish candidates, issues relating to Israel and foreign policy have taken a backseat to economic issues as Nevadans struggle with the nation’s highest unemployment and foreclosure rates.

The race, which could determine which party controls the Senate, has drawn national attention and millions of dollars in campaign contributions, including from Adelson, the casino mogul who has been Berkley’s nemesis in their hometown of Las Vegas.

Polls are still showing a virtually tied race between Berkley, 61, and incumbent senator Dean Heller, 52, of Carson City. Public polling has given Heller a slight lead in recent months, while a poll commissioned by the Democratic Party put Berkley ahead. All results, however, are within the margin of error.

Heller, a former Nevada secretary of state, was in his second term in the House of Representatives when appointed by Nevada’s government to serve for the rest of the term of Senator John Ensign, who resigned because of an extramarital affair.

Berkley, a seven-term congresswoman, decided to challenge Heller’s re-election bid, hoping that her personal popularity among southern Nevada voters and the state’s shifting demographics, which favors Democrats, would help catapult her into the Senate.

This summer, Berkley encountered a major setback, as the House Committee on Ethics decided to launch an investigation probing her work to save a Las Vegas kidney transplant center to benefit her husband, a kidney specialist. Berkley dismissed the claims and said her work was aimed at the benefit of her constituents, not her husband, but the investigation is still going on.

While the investigation served as a major distraction during a busy campaigning period, experts believed that the congresswoman weathered the storm, keeping pace in the neck-and-neck race despite it.

“Heller hoped that the ethics investigation against Berkley will consume all the oxygen out of her race, but she is still standing,” said David Damore, associate professor of political science at the University of Nevada, Las Vegas.

Rochelle Berkley was born in New York and moved to Nevada as a teenager. Her maternal grandparents were Jewish immigrants from Russia, and her father came from a Greek Sephardic family.

In Congress, Berkley made a name for herself as a fierce fighter for her constituency and for issues relating to Israel. As a successful fundraiser, she helped not only her campaign, but also other Democratic candidates. And despite uneasy relations at times with Minority Leader Nancy Pelosi, Berkley gained much visibility in the House.

For Democrats, the Nevada Senate race, alongside the one in Massachusetts, is seen as a must-win battle in order to maintain control of the Senate. Ironically, if Berkley fails to deliver, her fellow Nevadan, Senator Harry Reid, may lose his job as Majority leader.

It is this added importance that has put the national spotlight on the Berkley–Heller race. Barack Obama and Mitt Romney were both in Nevada last week, not only to support their party’s Senate candidates but also to try to sway voters in a state still listed as a toss-up. Obama won Nevada handily in 2008, but now has only a small lead in polls.

As of the end of June, Berkley has raised more than $7 million. Pro-Israel groups and individuals are among Berkley’s top donors, as are groups focused on women’s issues, health care and retirees. Berkley and her opponent both received significant donations from the gaming industry, which is based in Las Vegas.

Heller, with a war chest of $6.5 million, lists as his top donor the Las Vegas Sands company, owned by Adelson. Other donors include Jewish casino owner Steve Wynn and the Koch brothers.

Adelson and Berkley share a troubled history. She used to work for the casino magnate as vice president of legal and government affairs, until the two had a public falling-out over Adelson’s views on unions.

Adelson fired Berkley and has since supported her rivals in all her congressional races. With Adelson’s millions and his willingness to dig in deep this election cycle, he could still donate millions of dollars to Super PACs trying to defeat Berkley.

But local experts doubt that will happen. “Sheldon Adelson is not a kingmaker in Nevada politics,” said Eric Herzik, chair of the department of political science at the University of Nevada, Reno. “He has a lot of money, and he is interested in politics — but not in grassroots, in state of Nevada politics.”

Other experts noted that Nevada airways are already saturated with political ads so a large infusion of campaign money would not make a significant difference.

While Berkley is largely viewed as a moderate Democrat and a strong supporter of health care reform, on issues relating to Israel and national security she holds hawkish views. Berkley voted to authorize the war in Iraq and, as a former activist of the American Israel Public Affairs Committee, she is one of the most reliable votes AIPAC has when it promotes its pro-Israel legislation. During the Democratic convention in Charlotte, Berkley was at an AIPAC breakfast when she learned that her party decided to drop any reference to Jerusalem from its platform. She immediately made some phone calls and, according to her own account, was “very forceful in my sentiments” urging party leaders to change the platform.

“She is one of the most ardent supporters of Israel, everyone would agree,” said David Harris, president and CEO of the National Jewish Democratic Council. He added that Berkley is “widely loved” by Nevada Jewish voters. The Jewish population in Nevada has grown following the state’s population boom, and currently there are an estimated 75,000 Jewish residents in Nevada, making up nearly 3% of the population.

Heller also prides himself on having a pro-Israel record. Although he is a strong supporter of budget cuts, he made clear that Israel would be exempt of an across-the-board slash. He also voted in favor of all recent pro-Israel legislation items in Congress.

Israel, however, is not a major concern for Nevadans and is not playing a role in the state’s Senate elections. Nevada holds the nation’s record in unemployment, with 11.6% of its residents without jobs. And according to estimates, a majority of Nevadans have seen a significant drop in their home values, making their homes worth less than their mortgages. Nevada is also a leader in foreclosures, because of the real estate market collapse.

Still, the economic crisis has not moved Nevada voters to the anti-Obama camp automatically. “The Republican message has not taken hold,” said Herzik, who explained that a Republican tax-cut message does not resonate well in a state that has one of the lowest tax rates in the nation. In addition, homeowners with underwater mortgages still expect government assistance, which they believe is more likely to come from the Democrats.

Berkley, experts say, enjoys Nevada’s strong Democratic organization, which is already leading in registering voters, as well as union support that can help her secure votes. Her southern Nevada orientation is also seen as an advantage compared with Heller, who is less known in the state’s most populated region.

Damore added that all bets might be off given Nevadan’s past tendency to split the ticket — voting for a presidential candidate from one party and congressional candidates from another.