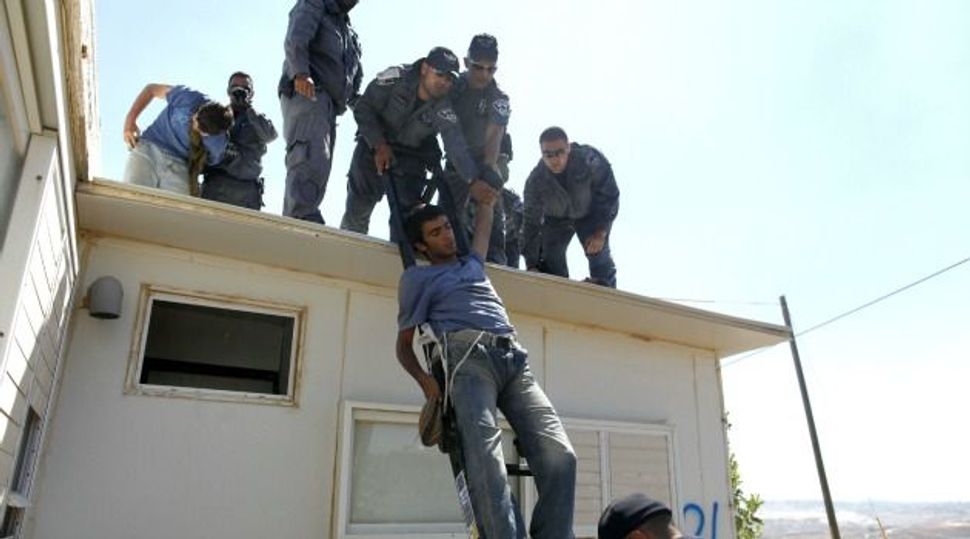 Three years after Prime Minister Benjamin Netanyahu declared that he had “no intention of building new settlements,” contractors paid by Israel’s government have constructed a brand-new, exclusively Jewish neighborhood in the Israeli-occupied West Bank.

As in the past, the government is portraying it as simply the expansion of an existing settlement. But in this case, the new construction didn’t come about as a result of settler lobbying. Quite the opposite: It resulted from a legal case brought by the left-wing activist group Peace Now against the government’s support for the unauthorized West Bank settlement of Migron.

Having lost that case and being forced under court order to dismantle Migron, the government has erected prefabricated homes on a previously clear site a little more than a mile down the hill that Migron topped. These are to house the 50 families of Migron, who at press time were hoping to move in within days. The cost to Israeli taxpayers will be $6 million.

After many delays and deferred court orders, the government evacuated the Migron settlers, whose outpost was built on privately owned Palestinian land, on September 2. The evacuation took place some six years after Peace Now first petitioned the Supreme Court, demanding this action.

The permits for the new neighborhood are temporary, but the settlement movement is expert at turning temporary into permanent, and its leaders are already saying that they will never leave the new site, known as Winery Hill.

“For us, we’ve rolled down the hill and we’re just calling it Migron,” evacuee Aviela Deitch said.

The government can say what it wants to the international community about expanding old settlements; as far as the settlers are concerned, they have scored a new settlement. Their ties with Kochav Ya’akov, the settlement in which their new site theoretically lies, are non-existent, and even their updated identity cards doesn’t list them as living there — it lists them as belonging to another nearby settlement, Psagot.

What’s more, evacuees and settler leaders say that they will ultimately purchase the majority of the land at the site of the original Migron; then, with title deeds in hand, they will obtain government permits to resettle there and also hold on to their new site. “Thanks to Peace Now, Migron will double itself to Migron and Winery Hill,” said Roni Arzi, spokesman for the main settler organization, known as the Yesha Council. He added sarcastically, “I hope that Peace Now will do it again, elsewhere.” Deitch foresees the two locations being combined into a kind of Greater Migron.

Michael Sfard, Peace Now’s attorney, scoffs at this claim. In his view, the Palestinians who own land the settlers took for the original Migron won’t sell to the Israelis who tried to dispossess them. But settlers have precedent when they talk of this kind of net gain after an evacuation.

Jewish settlers first arrived in Hebron in 1968, occupied an Arab hotel and left on only the promise of a nearby settlement. Within a decade they had the compensatory settlement, Kiryat Arba, and had returned to Hebron, where they established a permanent presence.

Peace Now argues that whatever settler building results from the Migron evacuation, it still constitutes a major success. “The number of housing units is not my meter for success or failure,” Sfard said. “The important thing is that we’ve brought the grabbing of Palestinian land to an end.”

In his view, the evacuation, together with the evacuation of 30 homes in Beit El earlier in the summer, has sent settlers an important message that building on privately owned Palestinian land won’t be tolerated.

Even more, Peace Now claims that the Migron case has put an end to unauthorized outpost building as a whole. The settlement movement first built wildcat settlements or outposts in the late 1990s and early 2000s in response to a freeze imposed on establishing new settlements after the signing of the Oslo peace agreement with the Palestinians in 1993. But since Peace Now filed its petition on Migron six years ago, the settler leadership has not established any new outposts.

“If it weren’t for the threat of court, I believe they would have continued,” senior Peace Now official Hagit Ofran said, adding: “They wanted to make Migron the flagship of a new generation of settlements, and it didn’t work out at all.”

For Ofran, the Migron case is a “resounding victory for Israel democracy and rule of law,” because it subjected settlers to the court’s ruling.

She also believes that it kept settlements on the agenda during its six years in court. “Migron is not only about the removal of 50 families, it was a major issue of the government and public discourse for years,” Ofran said. “If we didn’t have it, I believe the debate on settlements would have been far less strong.

Arzi of the Yesha Council, which controls the main settlement building company, Amana, denied that it was Peace Now’s suit that ended outpost building. “It’s because of pressures [on Israel] from the U.S. government — nothing to do with Peace Now,” he said.

Many analysts expected violence and mass demonstrations upon Migron’s evacuation. But the process went smoothly and calmly. This has strengthened the credibility of those who see evacuations of at least small communities as more manageable.

Still, the idea that Peace Now’s court petition backfired doesn’t seem to be just settler spin; it is heard in the Israeli center and on the left, as well. And Ashraf Khatib, spokesman for the Palestinian negotiating team, said he considers the evacuation “irrelevant, because they are not moving the settlers to outside occupied territory.”

Yediot Aharonot columnist Nahum Barnea, Israel’s best-known journalist, told the Forward that evacuating Migron served as a kind of smokescreen, diverting attention onto the issue of whether occupied land is privately owned and away from what he views as the key issues: the illegality of all settlement building under international law, and the impediment it poses to a peace process.

Migron has become the “exception that proved the rule,” he said — a rare evacuation because of the fact it lay on privately owned land, implicitly proving the “rule” that it’s acceptable to settle anywhere else. The construction that has stemmed from this principle, he said, appears to have made the two-state solution unviable.

“Barnea is choosing the easy way of despairing of everything,” Ofran responded. “It is not pragmatic to say, “If I can’t meet all my goals in one day, I don’t need small victories along the way.’”