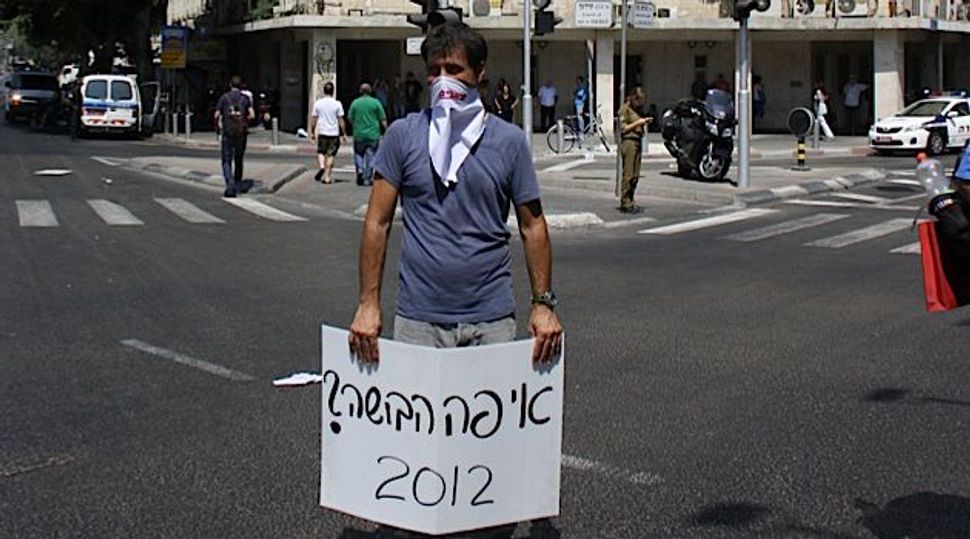 End of Era: Angry Israeli journalist protests the downsizing that is expected to lead to hundreds of layoffs at Ma?ariv newspaper. Image by dafna talmon

When Prime Minister Benjamin Netanyahu next goes to the polls, he looks set to have a stronger chorus of support from the national media than any Israeli candidate in the last half-century.

The next election must take place by October 2013, and the main international and domestic challenges facing the Israeli leader are not likely to have changed much. But by then, one of Israel’s oldest centrist mainstream dailies will be in the hands of a new right-wing owner. The financial position of the country’s most liberal daily newspaper may be much weakened. And a major Israeli TV station known for its hard-hitting exposés of Netanyahu and his government may be out of business.

Furthermore, if these changes take place, as currently seems likely, two of the three shifts will be seen as attributable, in no small measure, to the impact of a man who is not even an Israeli citizen: the American casino mogul and strong Netanyahu supporter Sheldon Adelson, whose $32 billion fortune has earned him the title of richest Jew in the world.

In the most immediate shift, Ma’ariv, one of Israel’s two mass-circulation newspapers, both of which occupy the political center and commonly take a critical line toward the right-wing Netanyahu-led government, is in the process of being sold to an ultra-nationalist settler.

Ma’ariv is in financial crisis, with its weekday edition’s share of newspaper readers having almost halved to 12% in the last decade. Before the prospective owner, Shlomo Ben-Zvi, stepped in, the paper was planning on becoming a web-centric publication that would issue print editions only on Fridays and holiday eves. If the deal doesn’t work out, sources at the paper say that migration to the web, or complete closure, is imminent. If the sale happens, Ben-Zvi is expected to shift Ma’ariv to the right, either under the existing Ma’ariv brand or by merging with Makor Rishon, the ultra-right daily that he already owns.

In anticipation of major layoffs and fearing difficulties receiving severance pay, hundreds of Ma’ariv employees demonstrated in Tel Aviv on September 11, some of them burning tires and blocking roads.

Meanwhile, the future is less certain for Haaretz, the mainstream newspaper that is furthest to the left and most critical of Netanyahu. With a financial crisis there worsening, the newspaper’s board has plans for further layoffs and other austerity measures, which prompted a demonstration in its offices, also on September 11. (The Forward shares some content with Haaretz, mostly online.)

The sale of Ma’ariv may indirectly accentuate the Haaretz Group’s woes. Haaretz’s press also prints Israel’s most circulated newspaper, Israel Hayom, which is distributed for free. This contract accounts for 15% to 20% of Haaretz’s revenue stream, according to the Israeli economic newspaper Globes. Ma’ariv’s deal with Ben-Zvi doesn’t include its printing press, and Haaretz has acknowledged in its own pages that Israel Hayom may buy the Ma’ariv press and dump its printing contract with Haaretz. That would deal the struggling liberal paper a financial blow, and it’s not clear whether Haaretz’s aggressive move to win over subscribers for its popular English language website will make up the difference.

“[Netanyahu] has a situation where the people who criticize him are punished. But not by him — by the vengeance of the Gods,” said Zvi Reich, a former senior editor at the Yediot Aharonot daily, who is now a journalism researcher at Ben-Gurion University.

But while “the Gods” — by which Reich means factors outside the political spectrum such as a tough environment for print media globally — have contributed to the crisis at these newspapers, he acknowledges that this is not the whole story.

Adelson, the Las Vegas billionaire so close to Netanyahu that he sat in the front row of the Knesset’s VIP section for Netanyahu’s 2009 electoral victory appearance, owns Israel Hayom, and he made the crucial decision to hand it out for free, offering ad space at a discount and absorbing the losses. This made it difficult for other newspapers, though more established, to compete. Israel Hayom has exceeded all expectations, claiming some 38.7% of Israeli readers — 1% more than the second place Yediot Aharonot.

The rise of the free daily has benefited Adelson’s close friend. The newspaper is so staunchly pro-Netanyahu that it has been derisively referred to as “Bibi Hayom” and the “Bibiton,” a play on “iton,” the Hebrew word for “newspaper” and Netanyahu’s nickname, “Bibi.” Adelson is widely said to have set it up in 2007 with the aim of helping to get Netanyahu elected and secured in his office.

“Israel Hayom has definitely been a catalyst in the situation we see today,” said Haim Har-Zahav, a board member of the Israel Journalists Association, which is representing Ma’ariv’s journalists in the newspaper’s crisis. Former Ma’ariv staffer Rafi Mann, currently a journalism and communications lecturer at Ariel University Center of Samaria, in the West Bank, agreed, saying Israel Hayom had made a “substantial contribution” to the current state of affairs.

Hardest hit in terms of subscribers was the once-mighty Ma’ariv, which had been on a steep downward slide for more than a decade. “Ma’ariv was already playing catch-up with Yediot — it had nothing unique to offer,” commented Eytan Gilboa, director of the School of Communication at Bar-Ilan University. “Then came Israel Hayom, which is different from any newspaper; it’s like printed television. It’s much thinner, with lots of pictures and simple language.” Israel Hayom, he said, became the only viable tabloid competitor to Yediot.

Israel Hayom columnist Dror Eydar told the Forward that he rejects the accusations leveled at his newspaper. “It’s very easy to blame the new member for the demise of the veteran,” he said. Eydar argued: “The problem at Ma’ariv is a crisis of 20 years. Israel Hayom is not the cause of the crisis — it is maybe the solution in the new era of media consumption.” Its free-distribution model, Eydar argued, is helping to maintain a culture of newspaper reading in Israel at a time when people have become accustomed to free online content.

Meantime, Netanyahu’s critics on television, as in print, are facing hard times. Closure looms at the fiercely investigative Channel 10. The government is refusing to agree to what the channel considers a manageable program for debt repayment to the state for overdue license fees.

Many in the media and in politics claim that Netanyahu is being inflexible toward Channel 10 in an effort to punish it. Nachman Shai, a former television reporter who is now a lawmaker with the opposition Kadima party, has claimed: “The government wants to strangle Channel 10 because of its sins.” The station has aired several probing reports on Netanyahu, who responded to one series of investigations last year by serving the station with a $1.2 million lawsuit, which is ongoing.

Journalists also claim that a recent legal case will inhibit investigative reporting that clashes with government defense priorities. Haaretz reporter Uri Blau was indicted and sentenced, albeit to only four months of community service, for possessing classified documents. Blau’s lawyer, Jack Hen, condemned what he called the “precedent-setting prosecution of a journalist for doing his job, according to which the public’s right to know and freedom of the press were seriously damaged.”

The goal of Haaretz and Channel 10 over the coming months is clear: survival. What is less obvious is what game plan Ben-Zvi has for Ma’ariv.

Har-Zahav believes that it will represent its new owner’s ideology and be “to the right of Israel Hayom.” Reich predicts a political change, but one that will be less dramatic, so as not to lose mainstream readers. He will realize that he has “to restrain himself if he wants to maximize the value of his new asset,” Reich said.

Yoav Ribak, co-chief news editor at Ma’ariv, is trying to stay positive about what the sale may mean. He expects only 300 of the 2,000 staff members to work for Ma’ariv after its sale. Asked if he thought the paper could continue to do serious investigative reporting, he said: “I think that’s possible if the new publisher wants it. The staff here will do this if given the chance.”