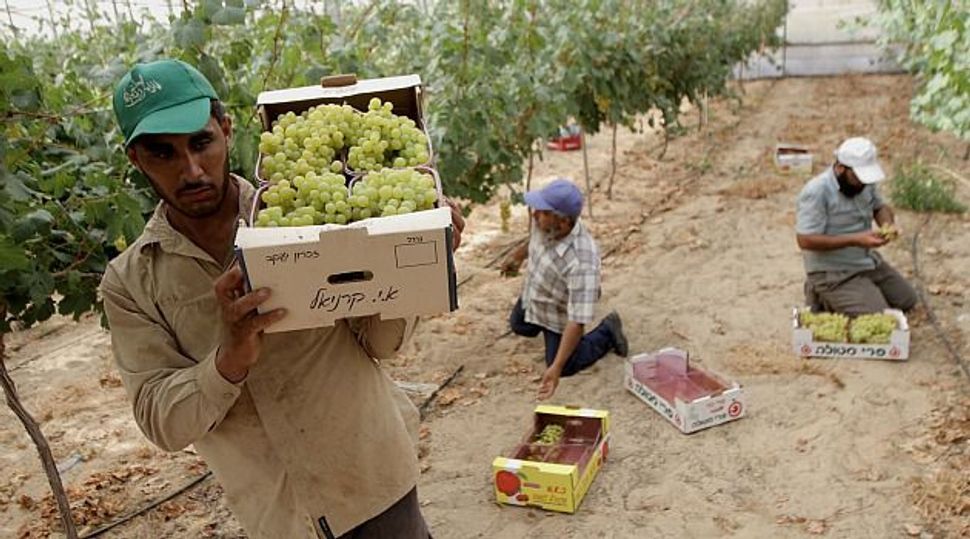 Grapes of Gaza: The Hamas government in Gaza has cut imports of Israeli fruit. The goal is to boost Palestinian producers. Image by getty images

The Hamas government has barred much of Gaza’s fruit imports from Israel, citing a need to cultivate local Palestinian agriculture and for “resistance” against the Jewish state.

The ban is opposed by Gazan produce traders who fear a squeeze on supplies and price hikes in the poor coastal enclave, which has a largely black market economy and lacks viable trade with Egypt, its other neighbour. Local growers however said the move would help them.

With the exception of bananas and apples, Gaza is no longer admitting fruit from Israel, the Agriculture Ministry said on Monday. The ban affects at least seven kinds of fruit and, in terms of sales, constitutes around a 50 percent cut in imports whose 2011 value the ministry put at $26 million.

Tahseen Al-Saqqa, the ministry’s director of marketing, said the move was in part a response to what he described as Israel’s refusal to allow the export, through its border with Gaza, of staple Palestinian fruit like grapes and guavas.

“The Palestinian farmer is suffering because all doors to export have been closed,” Saqqa said.

The charge was denied by Israel, which limits traffic in and out of Gaza and whose dealings with Palestinians there are often circuitous given long-running hostilities with Islamist Hamas.

“I know of no request to export agriculture products from Gaza that has been refused,” said Guy Inbar, spokesman for the division in Israel’s Defence Ministry which liaises with the Palestinian territories.

Gaza fruit importer Jaber Al-Shanty said the Hamas government ban was “irresponsible and unrealistic” as it overlooked the losses to hundreds of Palestinians whose livelihood depends on marketing the fruit.

“The local product is not nearly enough” to offset the shortfall, he said. “What do we have in large quantities, other than guava?”

Shanty said he and other importers had made advance payments to Israeli suppliers that would now be difficult to claim back.

Hikmat Abu Al-Qombuz, another importer, predicted spiralling fruit prices – which Gaza, most of whose 1.6 million Palestinians depend on aid, can ill afford.

Gaza dates and guava grower Ibrahim Al-Shaer, 52, said the move would help farmers by raising prices. But he admitted some imports from Israel remained vital.

“Israeli fruits compete with our produce in the market and they push down the prices. The government should allow imports at a reasonable level so the prices of our fruits do not go down sharply,” Shaer said as he stood in his field in Mawasi in southern Gaza.

Since the import ban went into effect on Friday, the price of peaches has doubled to eight Israeli shekels ($2) a kilo, while dates were selling at 11 shekels ($2.81) a kilo, up from 7 shekels.

Saqqa said the Hamas government would crack down on any Gazans deemed to be gouging fruit prices, and urged Palestinians to view the hardship through the prism of their struggle against Israel.

“We are people under blockade and we should have the culture of resistance,” he said. “Why should someone have all kinds of fruits on his table?”

Hamas won a Palestinian ballot in 2006, and had an uneasy alliance with the Western-backed rival Palestinian faction Fatah until they fought a brief civil war in Gaza a year later.

Under Hamas rule since, Gaza has suffered an often grinding embargo by Israel and Egypt, alleviated by goods smuggled in through tunnels from the Egyptian Sinai.

Israel, which fought a three-week war with Gaza in 2008-2009, eased overland travel restrictions in mid-2010. Hamas has urged Egypt to open up its border with Gaza since Islamists swept to power in Cairo this year but the call has not been met.