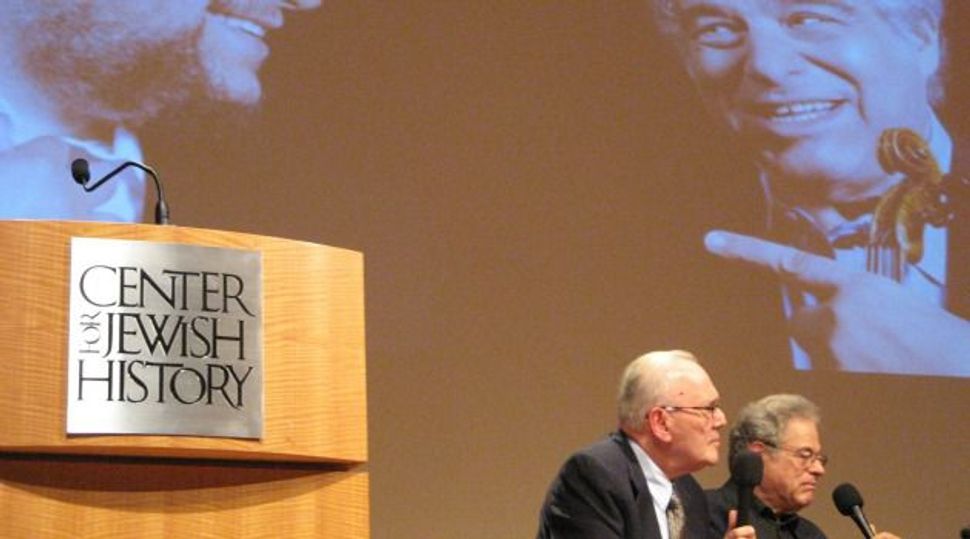 “Ir redt Yiddish?” [“Do you speak Yiddish?”] I asked violinist Itzhak Perlman. He smiled and answered me in Yiddish when I came into the green room at the Center for Jewish History to chat with the participants of the September 9 sold-out program “In Conversation: Eternal Echoes: Songs and Dances for the Soul.” To my query “Vos makht a Yid?” [“How are you?”] Cantor Yitzchak Meir Helfgot also answered in mameloshn, and we were off and running. Joining us in the Yiddish chitchat session were musicologist Arbie Orenstein, the event’s moderator, and Hankus Netsky, music arranger/co-producer of Perlman and Helfgot’s cantorial music CD, the subject of the evening’s panel discussion.

Following welcoming remarks by Michael Leavitt, president of the American Society for Jewish Music. Orenstein, who is a professor of musicology and piano at the Aaron Copland School of Music at Queens College of the City of New York and co-editor of the society’s journal, Musica Judaica, lauded “all those who had multi roles in this recording, including IMG Artists and Sony Masterworks” co-presenters of the event.

“This project really begins with Toby Perlman [Itzhak Perlman’s wife],” Netsky began. “When Itzhak thinks about a project, he thinks about every possible implication of what could go wrong and what’s it going to take to make it happen.” Perlman shrugged and interrupted: “Toby just makes it happen. She does not think of any implications…. This project is a dream project. She told me about the cantor [Helfgot], and all I know is that this was the guy. It was like bashert [destiny]…. We were in Israel, I was conducting the Israel Philharmonic [Orchestra] and there was this free night, a Thursday. I know it wasn’t Friday,” he added with an impish smile. “So we talked to some people… went backstage, [Helfgot] opens his mouth and the rest is history. First, I think to myself, ‘Why can’t we do something together? We are [both] such great fans of tones, sounds… voices. I went backstage. [I said:] ‘How are you? Would you like to do a record?’ Then it was Hankus: Help!’”

Hankus picked up the narrative: “Perlman asked me what do I know about khazones [cantorial chants]. He was happy to hear I was a fan…. So we talked about it.”

Commenting on the content of the “Eternal Echoes” CD, Netsky said: “Out of the 10 selections, four are cantorial, including “Kol Nidre.” Helfgot chimed in: “Only three are khazones, because ‘Kol Nidre’ is not really khazones!” Netsky countered: “But cantors do it. It sound really funny when rock musicians do it.”

“Are you interested in singing opera?” Orenstein asked Helfgot. “No!” he said promptly. Then, in Yiddish, Helfgot lauded Sony for the CD: “Es brengt an interes fun aza goyishe company; dos iz far undz a groyser koved” — “How wonderful that a gentile company was interested in this project; for us it was a great honor.” The audience then listened to two selections from the CD as the artists sat onstage.

Perlman said: “We were going for a particular sound…. There are many recordings with symphony orchestras with a thousand accompanying… with huge echoes where you think you are playing in the Jewish Tabernacle Choir. I just felt that we wanted to do something a little more intimate.

“I knew every fiddle player, and I knew the cellists and the viola players and they knew that I knew… and the thing is that they [all] sounded great.” Not one to let a potential humorous moment go unarticulated, Perlman teased Netsky for having mentioned an RCA Red Label recording, what with Sony representatives seated in the audience.

Afterward, as a line snaked around the center’s atrium lobby, Perlman and Helfgot — side by side at a table — cheerfully autographed their CD for their many appreciative fans.