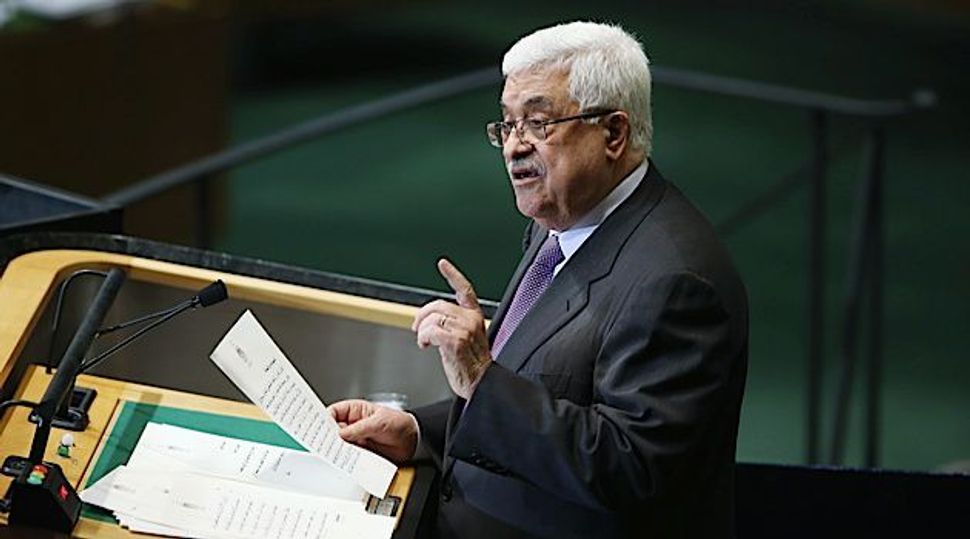 When Palestinian Authority President Mahmoud Abbas warned American Jewish leaders in late September that Israel had only a short time left to make peace, a few key Jews weren’t there to hear the message.

Anti-Defamation League national director Abraham Foxman didn’t show, although he had originally told organizers he would be there. Malcolm Hoenlein, the powerful executive vice chairman of the Conference of Presidents of Major American Jewish Organizations, also stayed away.

It’s not entirely clear why the top American Jewish officials didn’t attend the sit-down with the Palestinian leader. The Israeli newspaper Ma’ariv reported that Israeli Prime Minister Benjamin Netanyahu’s office had asked some American Jewish leaders not to attend, but Foxman told the Forward that he changed his mind about attending on his own.

Neither Hoenlein nor a spokesman for Netanyahu’s office responded to requests for comment.

The meeting was organized by the S. Daniel Abraham Center for Middle East Peace. Former Democratic congressman Robert Wexler, who heads the center, moderated. Wexler said that no one from the Israeli prime minister’s office contacted him about canceling the sit-down.

The tone of the meeting was grim. According to one attendee, Abbas described his own influence waning in the West Bank amid continual demonstrations and serious P.A. budget shortfalls. According to the attendee, Abbas warned that he would be in power for only another month or two, and that Israel should take a the opportunity to deal with him now rather ran to wait for his successor.

“He sounded to us rather conciliatory,” said Israel Policy Forum board chair Peter Joseph, who also attended the meeting. “He sounded like he was committed to a two-state solution and wanted to negotiate.”

Wexler said that he disagreed with the idea, put forward by Foxman and others, that American Jews shouldn’t meet with the Palestinians in the absence of negotiations. “The whole point of a meeting like this is to help foster a dynamic that can be fruitful in terms of encouraging the Israelis and Palestinians to negotiate again,” Wexler said.

Wexler’s group held two large-scale meetings between American Jewish leaders and Abbas two years ago, one in Washington and one in New York. This year’s gatherings were designed to be smaller; only 20 leaders were invited. Ten attended, according to Wexler. Four backed out after saying they would be there.

Not all the American Jewish machers stayed away. Alan Dershowitz attended, bearing a copy of a June op-ed he wrote for The Wall Street Journal. It proposed that Israelis and Palestinians begin negotiations on the condition of a freeze in construction in most West Bank settlements.

According to Dershowitz, Abbas looked briefly at the essay and then passed it to Saeb Erekat, a top Palestinian negotiator who had accompanied him to the meeting. Erekat apparently approved of the proposal and handed it back to Abbas, who circled a key paragraph, signed it and took a photograph with Dershowitz holding the document.

Dershowitz said he didn’t yet have a copy of the photograph.

It’s not clear how Dershowitz could succeed in pushing forward a process where so many professional diplomats have previously failed. Dershowitz told Haaretz that he sees himself as an “honest broker” in the peace process. Dershowitz’s plan rests on Netanyahu agreeing to another settlement freeze — something most observers deem unlikely.