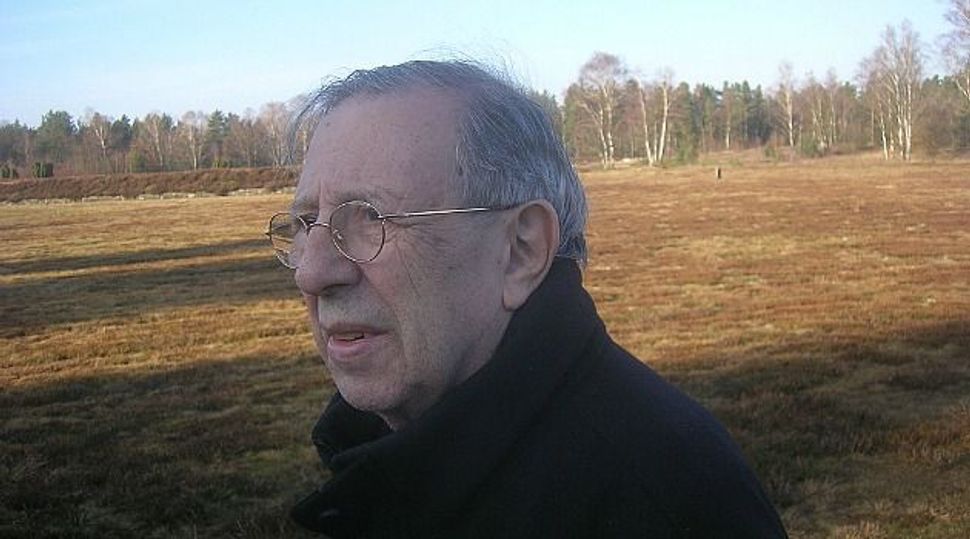 Shoah Scholar: Henry Friedlander studied the significance of the Nazis? extermination of the disabled as a precursor to the Holocaust against the Jews.

Holocaust scholar Henry Friedlander, a Berlin-born survivor of the Lodz Ghetto and of Auschwitz, Neuengamme and Ravensbrueck who went on to establish the significance of Hitler’s mass murder of the disabled as a precursor to the Shoah, died on October 17 in Maine after a protracted illness. He was 82.

As with many survivors, Friedlander did not go gently into death, but fought to the end for every breath of life. Felled by a stroke four years ago, Friedlander had been living in a convalescent facility, near his son Benjamin.

As a scholar, Friedlander is best known for his important work “The Origins of Nazi Genocide: From Euthanasia to the Final Solution,” which enhanced our understanding of the gassing process and the indispensable role that German physicians played in its development.

In this, Friedlander forged a scholarly path all his own. Many depictions of Nazi doctors focus on the heinous medical experiments performed at Dachau, Buchenwald and Auschwitz by physicians such as the infamous Josef Mengele and on the subsequent Nuremberg Doctors Trial. Friedlander concentrated on the so-called “euthanasia” program that preceded this. Launched by a direct order from Adolf Hitler in mid-October 1939 (but backdated to September 1 to give it the appearance of a wartime measure), the program established six killing centers for Germans — non-Jews — who were defined as “life unworthy of living” and “useless eaters.” They were killed in part because these — to use non-PC language —mentally retarded, emotionally ill, physically handicapped, congenitally ill Germans were an embarrassment to the Nazi concept of the master race.

Seventy thousand were killed in the Nazis’ euthanasia program, in which gassing became the preferred method after starvation and lethal injections proved too slow. Ultimately, the staff at these killing centers “graduated” to bigger assignments in the death camps of Treblinka, Belzec and other such facilities where millions of Jews were murdered.

Friedlander’s work demonstrated how gassing emerged — the transformation from mobile killing units to stationary killing centers, and the development of the death method itself, from mobile gas vans to the use of Zyklon B at Auschwitz.

Trained in German history, Friedlander was part of the generation of child Holocaust survivors who became scholars of the historic episode in which they had been unwilling participants. But he seldom wrote of his own experience. He concentrated his efforts instead on understanding the killers. For years, he and his late wife, Sybil Milton, edited a publication for the the Simon Wiesenthal center. He also edited a 26-volume documentary series called “Archives of the Holocaust” and served as president of the German Studies Association.

For more than a quarter of a century, Friedlander taught history in the department of Judaic studies at Brooklyn College of the City University of New York. Many of the Jewish students there, especially in the 1970s, were slowly gaining awareness of themselves as children of Holocaust survivors. But while his Brooklyn College colleague and fellow survivor Yaffa Eliach focused her research and course offerings on the experience of the victims, Friedlander stressed the nature of the crime. Friedlander was reticent about invoking the authority of his own experience in teaching his students. But anyone who listened knew immediately that he knew whereof he spoke.

Our mutual friend, Benton Arnovitz, who was my former colleague at the United States Holocaust Memorial Museum, described Friedlander quite accurately as a contrarian “who also was one of the finest and most fair-minded of an all-too-quickly passing generation of foundational Holocaust scholars. Henry was, as one might say in Yiddish, a genuine Kharakter.” He was, for example, an ardently secular Jew who would attend synagogue when invited by friends and sometimes invite himself when an invitation was not forthcoming. His friends were always surprised by how deeply he enjoyed the services. But Henry reveled in various identities.

His marriage to Milton, who was also a distinguished Holocaust scholar, was a loving one of shared interest and intellectual engagement. But as friends well knew, it was anything but quiet. Their love was intense but never gentle. He is survived by three children, Benjamin, Ruth and Robert, and two grandchildren. As is the case with many scholars, he is survived, too, by his scholarly achievements, which will endure, as will the students he taught, who will recall his exacting standards.