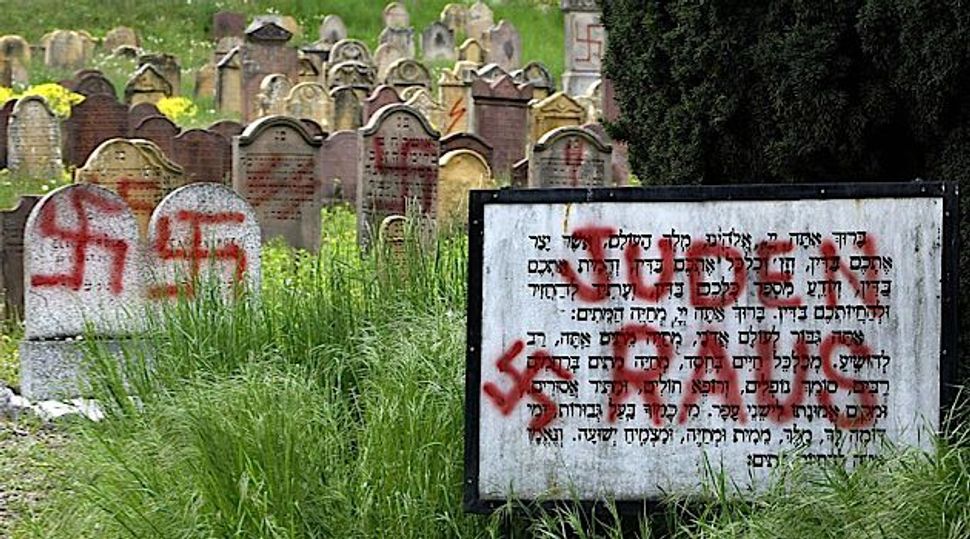 Teaching about the Holocaust has not kept the old wounds of Jew hatred from reopening in Germany.

This is the reality that the Bundestag, Germany’s parliament, implicitly acknowledged October 17 when it debated the state of anti-Semitism in the country following a disturbing government-commissioned report delivered to it last January. The report, written by a commission of nine academics that reviewed data from a large body of recent research, found that one-fifth of German citizens harbor anti-Semitic attitudes.

Lawmakers attending the debate, including German Chancellor Angela Merkel and Interior Minister Hans-Peter Friedrich, agreed across party lines on the need to act on the study’s recommendations. It was a consensus that included Bundestag Vice President Petra Pau, a member of the Left Party, which is staunchly critical of Israel. The legislators hope to have an action plan to vote on in the coming weeks.

But one of the report’s most important recommendations may prove to be among the most difficult to implement. The study calls for education about anti-Semitism in Germany to be separated from the study of the Holocaust.

“Contemporary anti-Semitism often revolves around issues that are linked to events that have occurred since 1945,” Julian Wetzel, a co-author of the report, told the Forward. She cited the ongoing Middle East conflict as but one example.

Wetzel said that curricula in Germany focus on the Holocaust, but teachers in Germany lack broader knowledge about anti-Semitism and anti-Semitic stereotypes. Among other things, she said, they have little understanding of the conflicts in the Middle East that can also animate anti-Semitism today. She questioned the assumption that traditional teaching about the Holocaust is an antidote to anti-Semitism.

“There is a belief that if you teach young Germans about the Holocaust and the Nazi period, they won’t become anti-Semitic,” Berger said. “But this is frequently not true.” Holocaust teaching is losing its effectiveness in the fight against anti-Semitism, she said, particularly with younger Germans several generations removed from the event.

Some observers also point out that a substantial population of Muslims is now residing in Germany, for whom the Holocaust has a much different political meaning. Its invocation with this population can have an effect opposite from what is intended, because of the Holocaust’s frequent use as a justification for the establishment of Israel — an event that this population views as having led to the displacement of the indigenous Palestinian Arabs.

For all that, Ministry of the Interior figures show that most of the country’s anti-Semitic incidents continue to come from the far right. In 2011, almost 96%, or 1,188 of the 1,229 reported cases, came from this quarter. Only 24 cases involved Muslims.

“The far right is getting stronger in Germany,” said Frank Jansen, investigative reporter for the respected centrist newspaper Der Tagesspiegel, during an interview. “Right-wing extremism is attractive to young men who see it as exciting in their boring environment.” Jansen is an expert on Muslim and right-wing extremism in Germany.

A rash of recent anti-Semitic incidents has heightened concern:

A Jewish leader was threatened on a Berlin Street on Yom Kippur. Also on Yom Kippur, a Berlin taxi driver refused to take a Jewish family to synagogue.

In August, a rabbi was beaten on a Berlin street; his 7-year-old daughter was threatened with death.

German teenagers yelled “Jewish pigs” at girls from Or Avner, a Chabad school, in September.

A Jewish cemetery was desecrated in the eastern city of Rostock, also in September.

Criticism of Israel is often one of the factors influencing contemporary anti-Jewish prejudice, the report states. Criticism itself is not an issue, according to the report, but anti-Israel critics cross the line, for example, when they compare Israeli treatment of Palestinians with the Nazi extermination of Jews.

According to Wetzel, even teachers often do not distinguish between Jews and Israelis, and may themselves harbor prejudices, stereotypes and anti-Israel views. 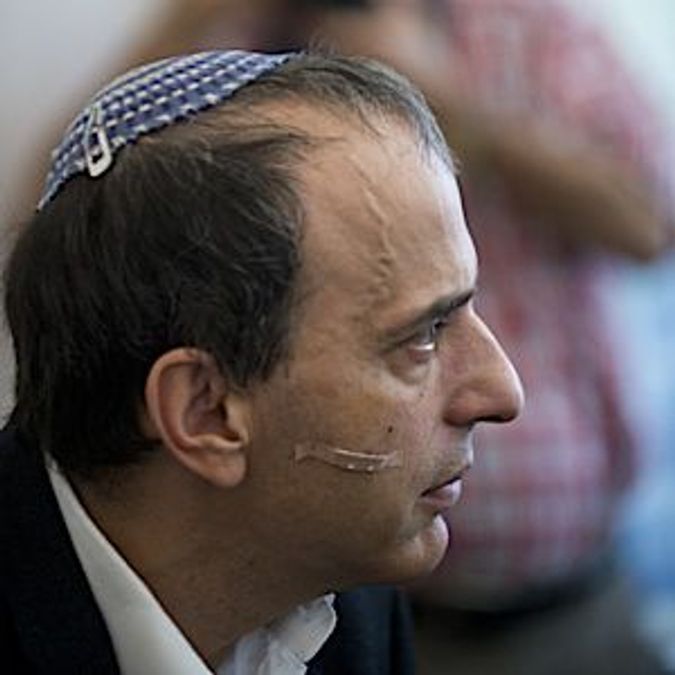 The Optimist: Rabbi Daniel Alter suffered injuries after an anti-Semitic attack on him in Berlin last August but he points to protests against the attack afterward to reject others? bleak assessments of Germany?s attitudes to Jews. Image by Getty Images

Substantive opposition to Israel’s occupation of the Palestinians in the West Bank and Gaza is common in Germany, and polls show that most Germans have negative views of Israel. But Israel bashing has also become a favorite weapon in anti-Semitic attacks. A 2010 report by the University of Bielefeld’s Institute for Interdisciplinary Research on Conflict and Violence found an increase in anti-Semitism linked specifically to Israel. Among the institute’s findings:

• More than 57% agree that Israel is waging a war of annihilation against the Palestinians, up from 51% in 2009.

• More than 40% agreed that “what Israel is doing to the Palestinians is basically no different from what the Nazis did with the Jews during the Third Reich.”

•More than 38% agreed that “considering the politics of Israel, it is easy to see why one would have something against the Jews,” up from 34% in 2009.

•At the same time, 67.5% of those responding in the 2010 poll agreed with this statement: “I like it that increasingly more Jews live in Germany.”

According to Beate Kupper, one of the researchers involved in the Bielefeld report, these findings reflect ambivalent attitudes. “Germans are happy if there are some Jews in their country, as this gives us release. It shows off that we are tolerant…. However, the strong blaming of Israel in Germany is full of anti-Semitic stereotypes [and] associations.”

According to many experts, the current debate in Germany over circumcision, which is couched in terms of the rights of the child and in balancing these rights with the right to religious freedom, also offers cover for anti-Semitism. “There is an underlying anti-Semitic and anti-Israeli undertone in the German public, and this is being shown in the current debate over circumcision,” said Malte Lehming, opinion editor of Der Tagesspiegel. He argued that anti-Semites are using a publicly professed desire to protect children as a cover for their hatred of Jews.

Emmanuel Nahshon, deputy chief of mission of the Israeli Embassy in Germany, paints a gloomy picture. “The political correctness which was imposed on Germany by the Allies after 1945 is starting to fade,” he told the Forward. “And what you see is the real face of Germany lurking behind this mask.”

He described a troubling situation in which Jews are being attacked by Muslims, neo-Nazis and ordinary Germans.

But one prominent victim of such an attack begs to differ. Rabbi Daniel Alter, 53, was brutally beaten on a Berlin street in August while his 7-year-old daughter was threatened with death.

Alter, whom the attackers identified as Jewish through his public wearing of a yarmulke, was treated for head injuries and a fractured cheek. The attackers, whom police described as being of “Arab descent,” have not yet been apprehended.

But Alter dissented from Nahshon’s bleak view. He emphasized instead the reaction of Germans from many walks of life today, when anti-Semitism rears its head. In his case, he noted, neighbors and friends spearheaded a rally in his support days after the attack; more than 1,000 Berliners attended. Many in the crowd, including Berlin Mayor Klaus Wowereit, wore yarmulkes in solidarity with Jews.

“Berlin Tragt Kippa” was the front-page headline in the popular tabloid the Berliner Zeitung the next day, meaning, “Berlin is wearing a kippah.”

In addition to the mayor, several celebrities were pictured wearing yarmulkes, including actor Wolfgang Bahro and jazz musician Andrej Hermlin.

“We have had a tremendous amount of public support,” Alter said. “It helped me and my daughter understand that we are the insiders in our society and those who beat us are the outsiders.” Alter, who has worked to foster dialogue between Jews and Muslims, spoke at the rally, where he said, “Our Berlin has no room for racism.”

Dilek Kolat, integration senator for the State of Berlin, which is both a city and a German state, asked Alter not to leave Berlin. “We need you here,” she said at the rally.

“Be sure I’m not going to leave,” Alter replied. “They might have broken my bones, but my desire for interreligious dialogue and love for peace remains unbroken.”