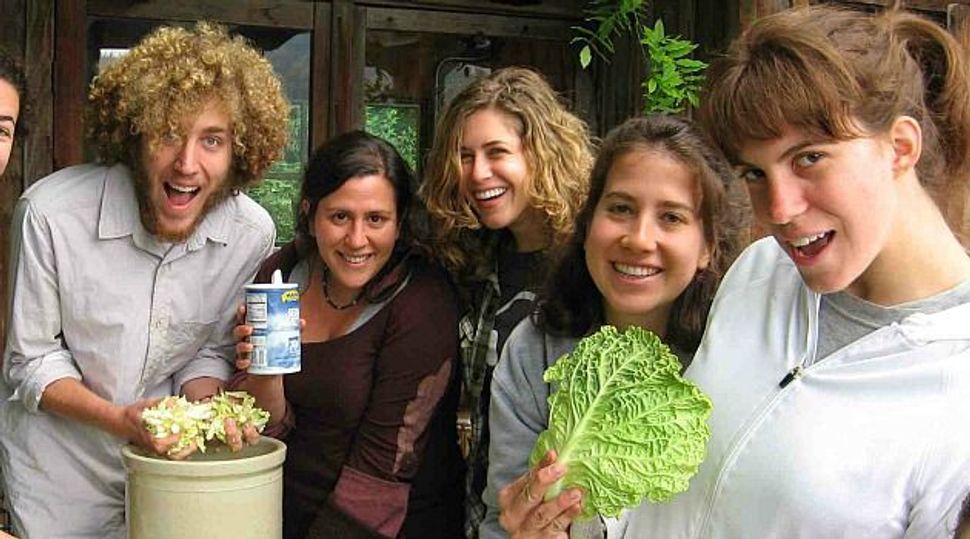 Doing Good: The Jewish Farm School is one of many small startup non-profits that has received financial support from more established groups.

Aside from a Jewish link, the nonprofit AgriGate, which connects Israelis with information on China’s agritech market, seems to have little in common with the Jewish Meditation Center of Brooklyn. And neither would seem to have much in common with Gather the Jews, a group that facilitates Jewish social and educational gatherings in Washington, D.C.

But though all operate as independent not-for-profit groups in disparate locales, all three also lack recognition from the Internal Revenue Service as tax-exempt charities. Instead, they have turned to fiscal sponsors — other groups that have established status as IRS-recognized charities — to whom donors make tax deductible contributions that go to these groups.

It’s an increasingly popular option for startups facing the challenges of launching a sustainable not-for-profit organization in the current economic climate. The organizations that take them on ease their transition into the not-for-profit world. But it’s also a strategy that is subject to few regulations.

“It’s a way for a program to get the funding they need without putting in place a whole fiscal or legal infrastructure that might not make sense when it’s at an early, embryonic stage,” said Andrés Spokoiny, President and CEO of the Jewish Funders Network. “The fiscal sponsor won’t necessarily be hands-on in the development of the program.”

Meeting IRS requirements for tax-exempt public charities can pose challenges even for older, established not-for-profit organizations. Recently, the Zionist Organization of America lost its tax-exempt status after not filing 990 forms to the IRS for three consecutive years. Storahtelling, a smaller not-for-profit that formed in 1999, was penalized for the same infraction in 2011. Hazon, a group devoted to Jewish environmental causes, now accepts tax-deductible donations on Storahtelling’s behalf as the latter organization works toward once again obtaining legal status as a public charity.

Hazon, which shares office space with the Forward in New York, also sponsors four other Jewish not-for-profit organizations: the Jewish Farm School, Wilderness Torah, Green Movement Amutah and Pushing the Envelope Farm. These organizations are all in their nascent stages and rely on Hazon for backoffice services as they grow toward becoming independent, IRS-recognized public charities, or 501(c)(3)s, as they are called, after the provision in the tax code that deals with their status.

Other Jewish groups that have recently increased the roster of not-for-profits they are sponsoring include Jumpstart, in Los Angeles, and Reboot and FJC, in New York.

Joshua Avedon, chief operations officer and director of Jumpstart, a fiscal sponsor of about a dozen Jewish groups in the United States and abroad, said there are two common models of fiscal sponsorship: a full-service option, in which the sponsoring group provides the fledgling group with comprehensive back office services, such as human resources and legal and payroll support, and a more limited charitable donor model, in which the sponsor’s main priority is to accept tax-exempt donations on the other group’s behalf.

This can involve pitfalls. William Josephson, a former chief of New York State’s Charities Bureau, said that regardless of which model is used, fiscal sponsors must treat the charity they’re sponsoring “as if it were in fact themselves,” exercising the same responsibility over reporting income and expenditures.

Avedon said that Jumpstart’s board evaluates prospective candidates by looking for “things that make a difference and that are missing from the landscape.” In doing so, he said, Jumpstart asks three major questions: Does the organization align with Jumpstart’s values? Is its leader the right person? Will the project likely have an impact to create change?

Josephson said that fiscal sponsors should take additional steps when evaluating new partners, including receiving the monthly financial reports and audits that are received by the not-for-profit organization’s managers.

“In other words, the fiscal sponsor’s management should have the same ability to obtain and monitor info about the sponsoree that they do about their own organization.” Josephson said, adding that “the reverse is always true,” and sponsored groups “have to be sure of the solvency of the fiscal sponsor.” Making sure their sponsor has the proper “internal controls can protect them.”

“If they use the same auditor, they have to be sure that auditor has the same legal responsibilities to them as to the sponsor,” Josephson said. “If their financial statements are with a different auditor, they should make sure their auditor has its own access to the fiscal sponsor’s books and records.”

There is currently little oversight, though, on how fiscal-sponsored relationships are operating. “The IRS is not running around trying to police fiscal sponsors,” said Daniel Kurtz, another former New York State Charities Bureau chief.

One point of contention is the length of time that an organization can align with a fiscal sponsor. Neither Jumpstart nor Hazon has standards in place for this. Leonard Lodish, a professor of marketing at the Wharton School at the University of Pennsylvania, said that fixed terms were good policy. “Social ventures, like other ventures, should eventually be independent,” he said. “If they’re not able to exist without some support of the fiscal sponsor or incubator, then they may have a flawed business model, mission and positioning. Something isn’t working right.”

But Ronda Spinak, co-founder and artistic director of Los Angeles’s Jewish Women’s Theatre, said incubation cannot be hurried. Her group is one of those sponsored by Community Partners, a relationship that now goes back five years.

“I think the Jewish Women’s Theatre is where it is today in part because of the tremendous support, guidance and hope they’ve given us,” Spinak said. “We owe a lot to them for where we are today.”

She is wary of going independent. “I’m a fiscally conservative artistic director,” she said. “I grow in an organic way. Right now it’s a great partnership for us. We’re not looking to leave. I hope that someday, Jewish Women’s Theatre is strong and fiscally sound enough to be our own 501(c)(3), but we’re not there yet.”