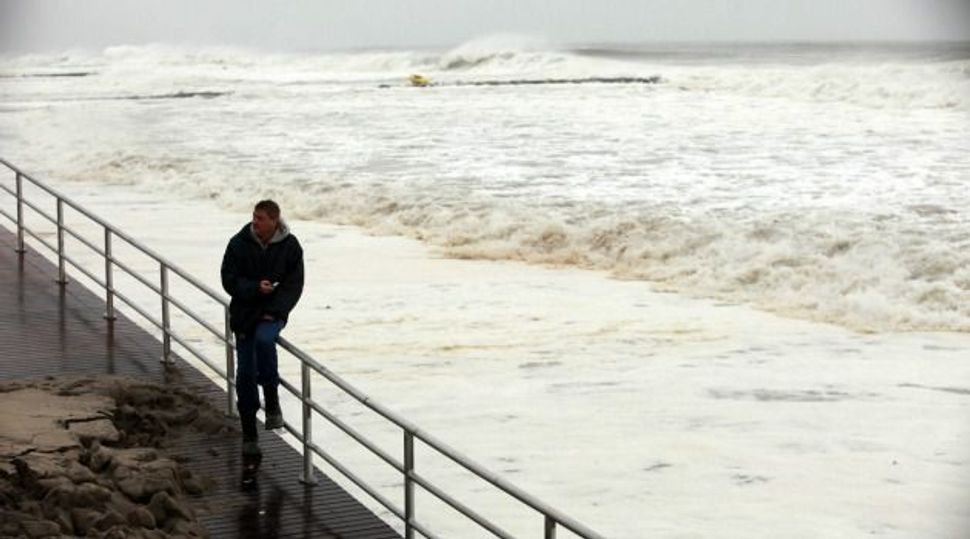 Waiting for Worst: As Hurricane Sandy approached the northeast, schools and stock markets shut down in its path. Image by getty images

By Josh Nathan-Kazis With Reuters October 28, 2012

Officials have ordered the evacuation of several heavily Jewish Brooklyn neighborhoods in the face of the once-in-a-generation hurricane barreling towards New York City and the Jersey Shore.

Some in the Hurricane Sandy-threatened areas are taking the warnings seriously. Others, less so. 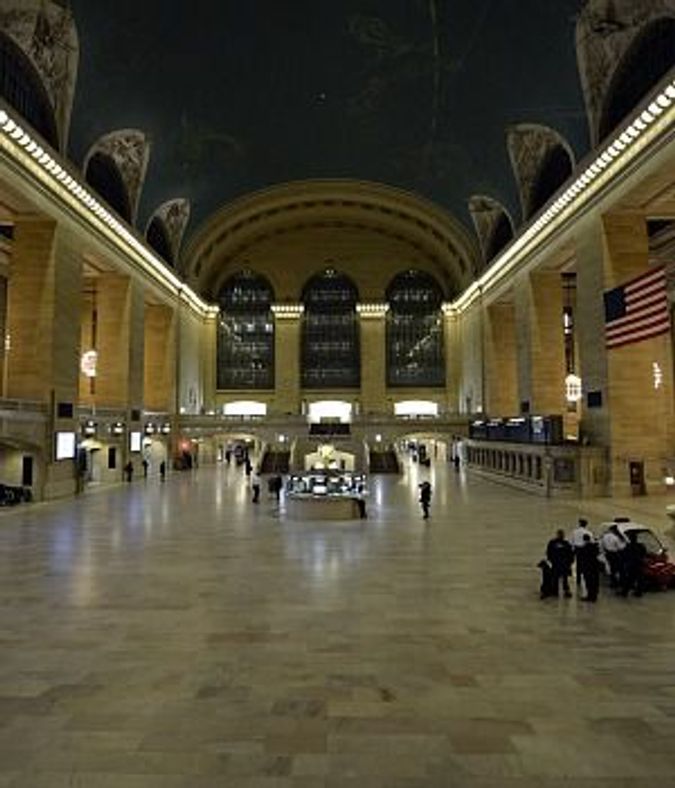 No Rush Hour: Grand Central Terminal was nearly empty after train and subway service was cancelled ahead of Sandy. Image by getty images

“Everyone is just drinking cocktails and hanging out,” said Dan Sieradski, a guest at an ongoing wedding in Brighton Beach, Brooklyn, which is under mandatory evacuation. “If you look outside, everything is completely grey windy and whipping around.”

The unprecedented storm has forced the shutdown of public transit in New York City beginning at 7 p.m. Sunday. Public schools are closed Monday, as are many offices. Mayor Michael Bloomberg warned at a Sunday press conference that the storm could bring periods of flooding and urged that those in evacuation areas to leave their homes.

The mayor has issued evacuation orders for Brighton Beach, Manhattan Beach, Coney Island parts of Sheepshead Bay, and the Rockaways, among other neighborhoods. All of those neighborhoods have significant Jewish populations.

The monster storm strengthened on Monday after hundreds of thousands moved to higher ground, public transport shut down and the U.S. stock market suffered its first weather-related closure in 27 years.

About 50 million people from the Mid-Atlantic to Canada were in the path of the nearly 1,000-mile-wide storm, which forecasters said could be the largest to hit the mainland in U.S. history. It was expected to topple trees, damage buildings, cause power outages and trigger heavy flooding.

The U.S. National Hurricane Center (NHC) said on Monday the Category 1 storm had strengthened as it turned toward the coast and was moving at 15 mph. It was expected to bring a “life-threatening storm surge”, coastal hurricane winds and heavy snow in the Appalachian Mountains, the NHC said.

Nine states have declared states of emergency and President Barack Obama has warned the nation to brace itself.

“This is a serious and big storm,” Obama said after a briefing at the federal government’s storm response center in Washington. “We don’t yet know where it’s going to hit, where we’re going to see the biggest impacts.”

The storm is reminiscent of the 2011’s Hurricane Irene, another late-season cyclone that threatened the New York area. Impacts in New York City itself were minimal, but upstate communities took heavy damage. A Holocaust survivor from Brooklyn died in the Catskills when her chalet was washed away by flood waters. A 5-year-old Jewish boy also killed by down power lines in Rockland County, N.Y.

The worst of Hurricane Sandy isn’t expected to come until sometime late Monday. On the Upper West Side of Manhattan, residents were getting ready Sunday night. Lines to enter supermarkets there reportedly stretch around the block.

Sieradski said that he planned to head upstate once the wedding was over. “As soon as the curfew goes into effect we’re hightailing it out of New York with Sandy nipping at our heels,” he said.

In the ultra-Orthodox communities near Monsey in upstate New York, stores are swamped with anxious shoppers.

“Basically if you go to the gas stations you can think we are now in the 1973 embargo,” said Yossi Gestetner, an Orthodox political blogger who lives in Spring Valley, N.Y

“If you go a grocery you can think it’s a Friday afternoon, an hour before the store’s closing,” Gestetner said, referring to the pre-Shabbat rush.

“And the hardware stores make you think it’s erev Pesach,” Gestetner added, referring to the shopping season before the start of the Passover holiday.

Gestetner added that there are far fewer Orthodox Jews in the Catskills now than when Irene hit last summer, as the Catskills vacation season has ended.

Comedian Jimmy Kimmel wasn’t buying the hype, though. He insisted his shows at the Brooklyn Academy of Music would go on as planned.

Forecasting services indicated early Monday the storm would strike the New Jersey shore near Atlantic City on Monday night. While Sandy does not yet pack the punch of Hurricane Katrina, which devastated New Orleans in 2005, it could become more potent as it approaches the U.S. coast.

New York and other cities and towns closed their transit systems and schools and ordered mass evacuations from low-lying areas ahead of a storm surge that could reach as high as 11 feet (3.4 meters).

All U.S. stock markets will be closed on Monday and possibly Tuesday, the operator of the New York Stock Exchange said late on Sunday, reversing an earlier plan that would have kept electronic trading going on Monday.

Sandy forced President Obama and Republican challenger Mitt Romney to cancel some campaign stops and fueled concern it could disrupt early voting – encouraged by the candidates this year more than ever – before the Nov. 6 election.

The United Nations, Broadway theaters, New Jersey casinos, schools up and down the Eastern Seaboard, and myriad corporate events were also being shut down.

Officials ordered people in coastal towns and low-lying areas to evacuate, often telling them they would put emergency workers’ lives at risk if they stayed.

“Don’t be stupid, get out, and go to higher, safer ground,” New Jersey Governor Chris Christie told a news conference.

Forecasters said Sandy was a rare, hybrid “super storm” created by an Arctic jet stream wrapping itself around a tropical storm, possibly causing up to 12 inches (30 cm) of rain in some areas, as well as up to 3 feet (90 cm) of snowfall in the Appalachian Mountains from West Virginia to Kentucky.

Worried residents in the hurricane’s path packed stores, searching for generators, flashlights, batteries, food and other supplies in anticipation of power outages. Nearly 284,000 residential properties valued at $88 billion are at risk for damage, risk analysts at CoreLogic said.

Utilities from the Carolinas to Maine reported late Sunday that a combined 14,000 customers were already without power.

The second-largest oil refinery on the East Coast, Phillips 66’s 238,000 barrel per day (bpd) Bayway plant in Linden, New Jersey, was shutting down and three other plants cut output as the storm affected operations at two-thirds of the region’s plants.

Oil prices slipped on Monday, with Brent near $109 a barrel. “With refineries cutting runs, we’re likely to see a build-up in crude stocks which could be driving bearish prices at the moment,” said Michael Creed, an economist at National Australia Bank in Melbourne.

Bloomberg ordered the evacuation of some 375,000 people from low-lying areas of the city, from upscale parts of lower Manhattan to waterfront housing projects in the outer boroughs.

The U.S. Coast Guard responded to a distress call from HMS Bounty, a tall ship with 17 people aboard approximately 90 miles (145 km) southeast of Hatteras, North Carolina. A replica built for the 1962 movie version of “Mutiny on the Bounty,” the three-mast, 180-foot (55-metre) vessel was believed to be taking on water and was without propulsion, the Coast Guard said.

“We are talking with the crew and the owner about search and rescue possibilities,” Petty Officer David Weydert said.

While Sandy’s 85 mph (140 kph) winds were not overwhelming for a hurricane, its exceptional size means the winds will last as long as two days.

“This is not a typical storm,” said Pennsylvania Governor Tom Corbett. “It could very well be historic in nature and in scope.”