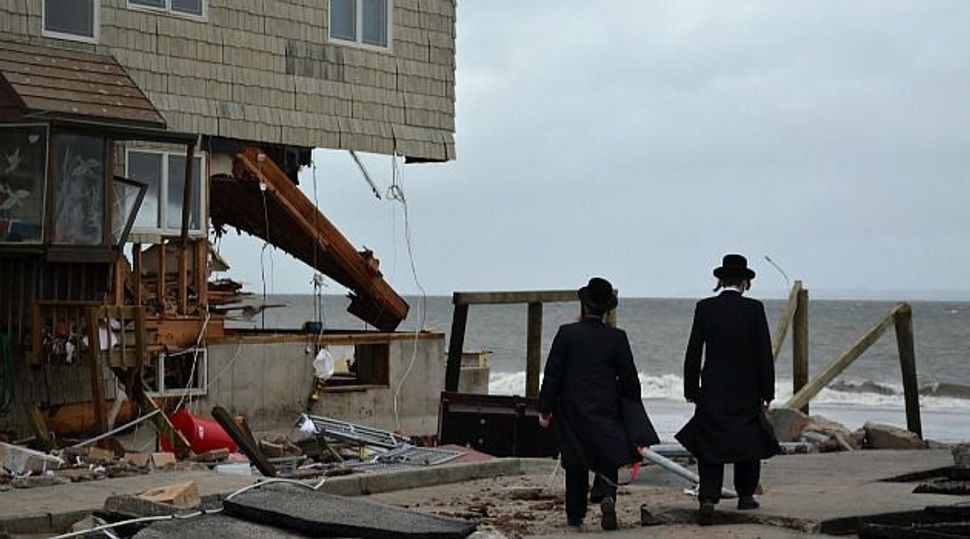 ?No One Knows? Residents of Sea Gate were asking why the media ignored widespread devastation in the oceanfront Brooklyn community. Image by nate lavey

Many homes facing the Atlantic Ocean were gutted by floodwaters. A few were absolutely flattened by the raging winds. Broken windows gaped open. In one home, rising tides pushed furniture out through two bulging garage doors.

Razie Lefkowitz, whose home is still standing, said that she was watching the waves with some of her five children at around 6:30 p.m. Monday when the water started rising quickly.

“We basically just ran away,” she said.

Water rose to three or four feet deep on Surf Avenue, the main street, which is now impassible in some places. Lefkowitz said that one neighbor hung a white towel out of her second-story window to signal for help after the first story of her house flooded.

Lefkowitz, like many others here, rode out the storm. Despite the widespread severe damage, there are no reports so far of deaths or injuries in Sea Gate.

“The captain doesn’t leave the ship,” said Pinny Dembitzer, president of the local homeowners association, when asked via telephone Tuesday morning whether he had stayed the night.

The streets were covered in sand blown in by the storm. Residents walked around in a daze, stunned by the historic disaster. 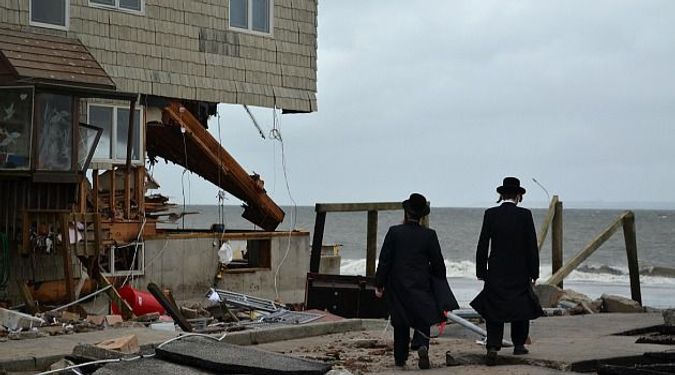 ?No One Knows? Residents of Sea Gate were asking why the media ignored widespread devastation in the oceanfront Brooklyn community. Image by nate lavey

Sea Gate is one of the most exposed spots in New York City and regularly bares the brunt of gales and Nor’easters. But residents never expected Sandy to be as bad as it was.

“This is the worst it’s ever been,” said one resident, who gave his name as Randy, as he walked near the gate.

Standing in front of her home with two of her children, Lefkowitz said that she could tell which houses the muddy piles of debris had floated away from by looking at the photos washed up on her lawn.

On Beach 47th Street, at the western end of Sea Gate, a handful of members of the Satmar Hasidic sect gathered around a devastated home, removing boxes of belongings. A window facing the ocean was gone, leaving a gaping hole. It looked as though water had knocked away some part of the home’s foundation.

“Everybody’s OK,” said a man who would give his name only as Mayer. He said the home belonged to his uncle, who owns a bakery in Boro Park.

Mayer said he was shocked that the media and broader community seemed to be ignoring the devastation in Sea Gate.

“There’s no news crews in here. No one knows about us,” he said.

Even hours after the worst of the storm receded, it was still difficult to even reach Sea Gate. The entrance on Neptune Avenue is blocked by flooding. The road to the Surf Avenue gate is muddy but passable.

On Beach 28th and Surf, a few blocks from the entrance to Sea Gate, dirty splash marks ran six stories up the inland side of one building. Cars caught in the surge last night were sprawled in strange positions – one on its side, others in the middle of streets.