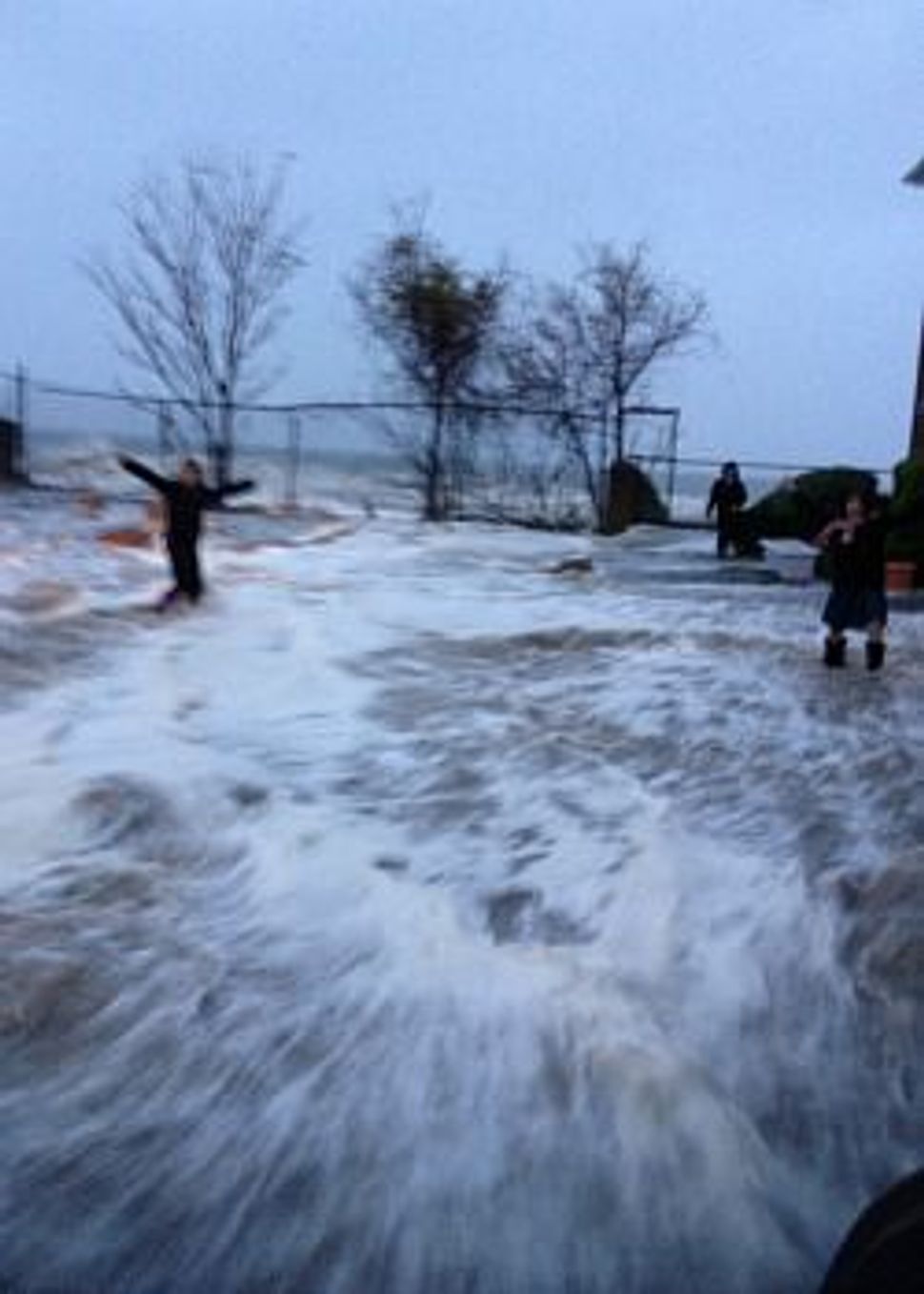 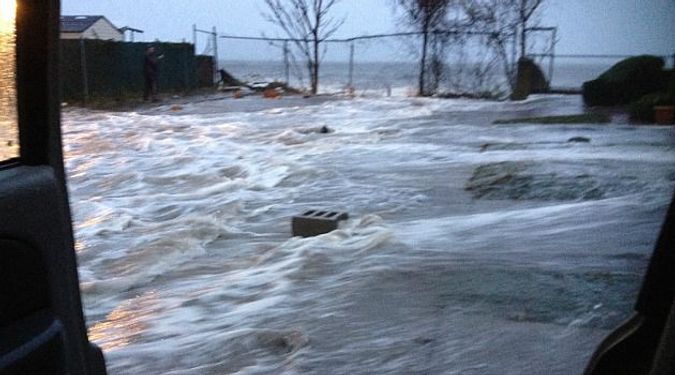 The massive storm system that ransacked the East Coast on October 29 brought unprecedented devastation to Jewish communities in and around New York City.

Sandy pushed eight-foot-high waves through the Brooklyn neighborhood of Manhattan Beach. In Sea Gate, on the western tip of Coney Island, entire homes collapsed. An apartment building was evacuated after basement flooding led to explosions on Manhattan’s Upper East Side. Two Jews in their 20s were crushed by a tree in Brooklyn’s Ditmas Park area. And all of Lower Manhattan, including the Lower East Side, was expected to be without electricity for days. 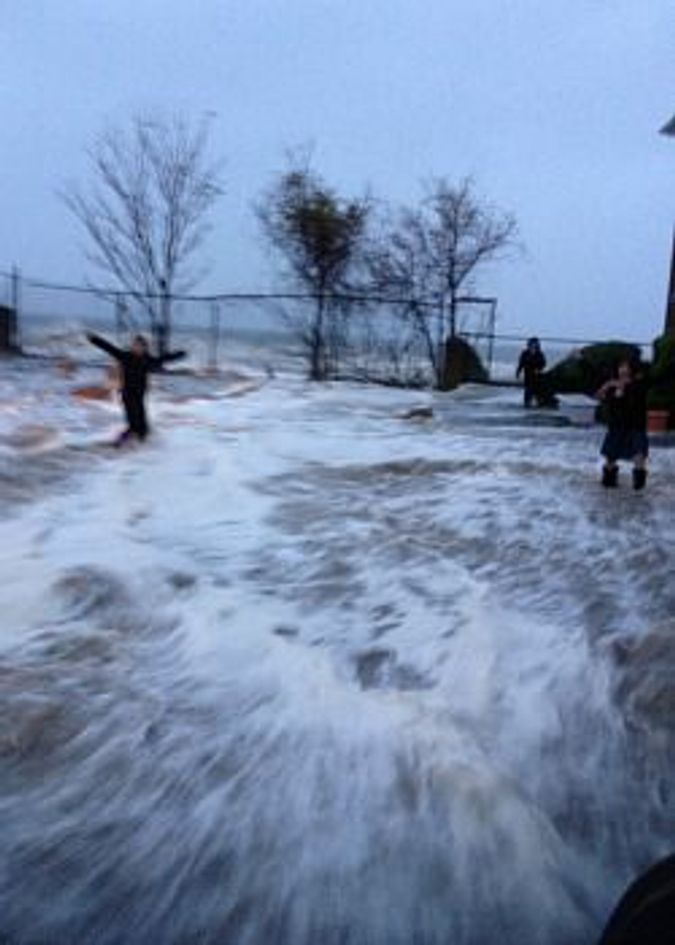 Jewish communal officials said it would take weeks to measure the damage to community institutions. “It’s a disaster. In every sense of the word,” said David Pollock, director of security and emergency planning for the Jewish Community Relations Council of New York.

Beachfront neighborhoods in South Brooklyn appear to have suffered the most dramatic damage. Sea Gate, a small gated community in Coney Island that is surrounded on three sides by the Atlantic Ocean, is home to a few hundred Jewish families. Midday on October 30, just hours after rising seas had flooded the neighborhood, residents were struggling to describe what they had seen the night before.

Raizy Lefkowitz, whose home is still standing, said that she was watching the waves with some of her five children at around 6:30 p.m. when the water started rising quickly.

“We basically just ran away,” she said.

Standing in front of her home, Lefkowitz said that she could tell which houses the muddy piles of debris had floated away from by looking at the photos washed up on her lawn.

A huge chunk of the first floor had been torn out of one home facing the ocean. Three blocks from the sea, a broken dinghy sat incongruously on a sidewalk. The beach itself looked smooth, as though it had been scrubbed clean.

On Beach 47th Street, at the western end of Sea Gate, a handful of members of the Satmar Hasidic community gathered around a devastated building, removing boxes of belongings. A seaward-facing window was gone, leaving a gaping hole.

“Everybody’s okay,” said a man who would give his name only as Mayer. He said the home belonged to his uncle, who owns a bakery in Boro Park. Mayer said he was shocked that the media and broader community seemed to be ignoring the devastation in Sea Gate.

“There’s no news crews in here. No one knows about us,” he said.

In nearby Manhattan Beach, home to a large Russian Jewish community, massive flooding damaged homes and sidewalks. Images posted online suggested that parked cars had been entirely submerged by floodwaters.

The Rockaway Peninsula also experienced serious damage. West End Temple in Neponsit, Queens, was entirely inundated with floodwater. “The sanctuary was completely upended,” said Rabbi Margie Slome, the synagogue’s spiritual leader. “Prayer books are all over the place, the pew was upended, the cushions are soaked through, the rug is completely wet.” The synagogue’s Torah scrolls are safe, Slome said, but a lower level in the synagogue’s building remains full of water.

Two Jews living in Brooklyn were killed by a falling tree on the night of October 29 while walking their dog in their Ditmas Park neighborhood. Jacob Vogelman and Jessie Streich-Kest, both in their early 20s, grew up at Park Slope synagogues, according to a source who knows the pair. Steich-Kest, a high school teacher in Bushwick, was the daughter of Jon Kest, executive director of New York Communities for Change and former director of New York ACORN.

Damage wasn’t limited to New York City. The Isabella Freedman Jewish Retreat Center in Falls Village, Conn., reported on Facebook that a tree had fallen through the roof of the campus’s main building.

In Jewish neighborhoods that escaped the worst of the storm, life seemed to be going on as normal. Trees were down in the Hasidic section of Brooklyn’s Williamsburg, but private religious schools were open, even though public schools around the region were not. Residents of Park Slope and Cobble Hill, Brooklyn neighborhoods with large communities of young Jewish families, reported downed trees but little serious damage. Life on the Upper West Side of Manhattan, which never lost power, headed back to normal.

In the coming weeks, conversations are sure to turn to whether residents in low-lying areas took enough precautions before the storm.

As the storm approached, people faced the threat with varying degrees of seriousness. In Brighton Beach, a Russian-Jewish neighborhood in South Brooklyn, one wedding went on as usual on the afternoon of Sunday, October 28, despite the mandatory evacuation set to take hold at 7 p.m.

“Everyone is just drinking cocktails and hanging out,” said Dan Sieradski, a guest at the wedding. “If you look outside, everything is completely gray, windy and whipping around.” Sieradski said that he planned to head upstate once the wedding was over. “As soon as the curfew goes into effect, we’re hightailing it out of New York with Sandy nipping at our heels,” he said.

Sieradski made it home. Within 24 hours, the storm had sent cars floating down the street in Brighton Beach.

Hatzalah, the Jewish ambulance service covering the New York area, said Monday afternoon that it was receiving fewer calls than on a normal day, according to Dovid Cohen, the group’s CEO. “Our guys are ready,” Cohen said at the time. Reached by telephone later that evening, a frantic-sounding Cohen said he couldn’t talk and then hung up.

At 200 East End Avenue, a high-end apartment building on the Upper East Side, flooding in the basement and the boiler room led to explosions. Residents were evacuated to an adjoining building, 180 East End Avenue, where neighbors took them in. Some slept in apartments, others in the building’s common spaces.

“People stayed on phones, trying to get them placed. This was 9 o clock last night,” said Fran Nathan, a resident of 180 East End Avenue. “It was quite a wonderful thing.” (Nathan is this reporter’s great-aunt.)

Jewish communal officials have yet to measure the scale of the damage and develop coherent rehabilitation plans.

“I haven’t spoken to major institutions out there yet,” Pollock said, noting that it was hard enough to just get around in some parts of Brooklyn, with some roads still flooded and others blocked by trees. “It’s going to be days and weeks to get workers out.”

B’nai B’rith International, the Jewish Federations of North America and the Union for Reform Judaism have each sent emails soliciting donations to disaster relief funds.

John Ruskay, CEO of the UJA Federation of New York, said that his network’s focus now was on getting needy and elderly clients to safety. “The first priority today and until we finish is to identify the people who are isolated, who need to be helped and need to be relocated. That trumps all other considerations,” Ruskay said. “The first priority is taking care of people. Then we’ll assess the damage to buildings.”

Residents of hard-hit districts, meanwhile, remain shaken. Power and traffic lights are out in the upstate Orthodox towns of Spring Valley and Monsey, according to Yossi Gestetner, an Orthodox political blogger and resident. Gestetner said that the neighborhood was in turmoil and that many residents were heading to Brooklyn to stay with relatives as long as the power was out.