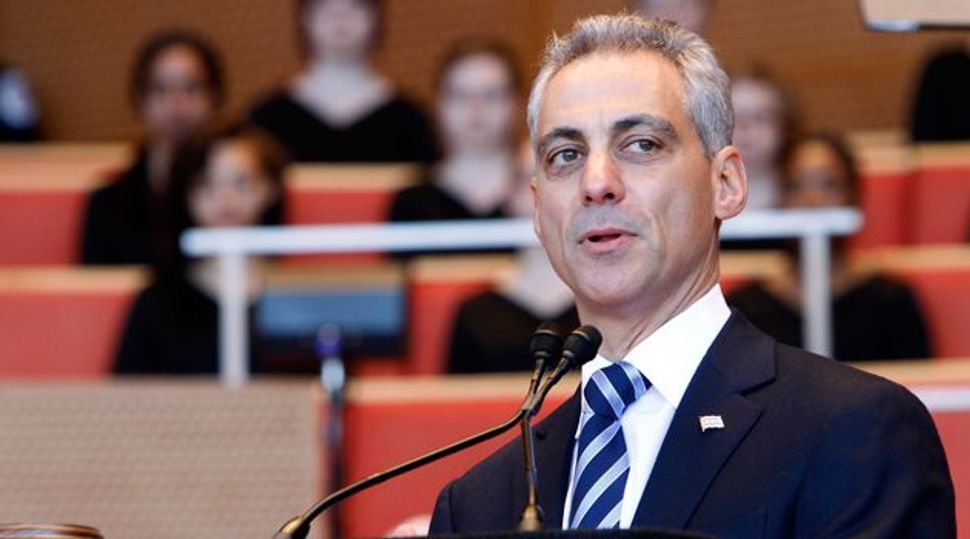 Brothers: Rahm and his brother Ari Emanuel are both known for their belligerent personalities. Image by getty images

You know Rahm Emanuel, mayor of Chicago? And his brother Ari Emanuel, arguably the most powerful talent agent in Hollywood? Well, they beat me up.

Not last week, or last month, or last year, but back in the ’70s, when they were teenagers and I was 10. Mind you, I’m not bitter about it or anything. Hell, I’ve been using the story as social currency ever since the Brothers Emanuel earned their respective notoriety. After all, everybody loves hearing how those ball-busting siblings were busting balls even before they owned Chicago and Hollywood. So let’s travel back to Wilmette, Ill. The year was 1976….

My pediatrician was Dr. Benjamin Emanuel, aka Dr. Benny. Dr. Benny was a faux-crotchety alpha male, the proverbial grump with a heart of gold, the kind of person who would offer to administer allergy shots at his home rather than at his office, just because it was difficult for the patient’s working mother to get her son to said office before closing time. Each Wednesday, for months and months, my mother drove me — a kid who was allergic to every tree on this green earth — the one-ish mile to Dr. Benny’s.

The trips to Dr. Benny’s modest home in the affluent Chicago suburb of Wilmette were cut-and-dried: Trudge into the living room, get teased by the doctor, get jabbed in my bicep, then go hang out somewhere until we were certain I wasn’t going to have a negative reaction to the shot. When the weather was nice, that somewhere was the Emanuels’ backyard. Generally, my sojourns behind the house were solitary and unexciting, but every once in a while, Dr. Benny’s two high school aged sons paid me a visit.

It was common knowledge around Wilmette that Rahm and Ari Emanuel were bullies — hyper-intelligent bullies, but bullies nonetheless. (This was unlike their father, who only pretended to be a bully.) Rahm and Ari were, respectively, 6 and 5 years older than I was, so other than my weekly appearances at Dr. Benny’s, our paths never crossed; still, in those brief moments, the boys took a disliking to little ol’ me.

How do I know they disliked me? Because at every given opportunity, they threw me to the ground. Hard. Really hard.

I’ve blocked out the specifics of the attacks. The only things I know for certain were that a) they were unprovoked, and b) they hurt. I don’t know if their pushes were planned or spontaneous — although I suspect there might have been some forethought on that memorable afternoon when they shoved me back and forth and back and forth.

Whenever the Brothers Emanuel went to town on me, there was always a pervasive sense of dread, the feeling that the violence was going to escalate, that their fists and feet were going to fly, that my bones would be snapped and my skin gashed, that I’d get smacked on my sore injection spot. As it so happened, Rahm and Ari never injured me too badly — it would’ve been pretty dumb for them to draw blood while their father was standing 20 yards away — but it was some scary shit that made my already lousy allergy shot afternoons even lousier.

Out of morbid curiosity, I followed my tormentors’ careers, and what careers they are: As an agent, Ari is the biggest of the big, and his steamroller attitude is common knowledge in the industry; few were surprised to learn he was the inspiration for the aggressive Ari Gold character of HBO’s“Entourage.” As for Rahm, in addition to his celebrated stint in Congress, he was a key figure in the Clinton and Obama White Houses before becoming mayor of Chicago in 2011. His aggressive approach was no secret, either. When he was a Democratic Party official, he famously mailed a dead fish to a pollster who angered him. In a 2006 CNN.com profile, Oklahoma Rep. Tom Cole said of my old tormentor, “He’s dangerous, absolutely relentless when he’s got a political kill in sight.”

All of which got me to wondering if it’s common for a childhood tough guy to succeed as an adult. According to Robert Faris, a sociologist at the University of California Davis, if the circumstances are right, the answer is yes. “On average, the future for bullies is bleak,” Faris said. “They tend to come from homes that are problematic, and then end up having long-term problems. But there’s a caveat to that: another category of kids who are highly aggressive, kids who come from good homes, kids who are often quite popular. Those children are probably more skillful in the way that they use aggression. They often have high social skills, and do quite well in later life. There are probably a number of politicians and successful business leaders who fall into that category.”

For instance, Mitt Romney. As The Washington Post reported in May, back in 1965, the teenage Romney and his posse teased, then tackled, then abused a fellow student because they didn’t like his haircut. The Brothers Emanuel have little in common with Romney, other than the fact that they were childhood bullies and they stand near or at the top of their professions. Makes ya think, doesn’t it?

Me, I’m not surprised that Rahm and Ari ended up where they are. I was never privy to Dr. Benny’s parenting style, but I suspect he was the kind of father who wouldn’t tolerate anything but the best out of his children; plus, who was going to stand in their way? Not me, and probably not anybody else. I was frightened of the Emanuel boys back in the mid-1970s, and I suspect if I worked for or with either Rahm or Ari Emanuel, I’d be frightened of him today. For that matter, I was kind of relieved that neither responded to my several requests for comment on this story.

I actually did have one post-Wilmette encounter with Ari Emanuel. In 1999, I wanted to hire Larry David as a celebrity sports columnist for a web site I worked at. After some research, I discovered that Ari was his manager, so I reached out to my former antagonist. At that point, in ’99, a schnook like me could get him on the phone without any problem. After I made my pitch, I told him: “You know what, Ari? You and me, we have a history. Your dad was my pediatrician. And sometimes when I came to your house to get my allergy shots, you and your brother beat me up.”

There was a second or three of charged silence, then he said, “That must’ve sucked for you,” and hung up. And he never called me back about Larry David.

Alan Goldsher is the author of “Paul Is Undead: The British Zombie Invasion” (Gallery Books, 2010). He’s the host of “Book It,” the first interactive talk show about writing, reading and publishing. He blogs at.