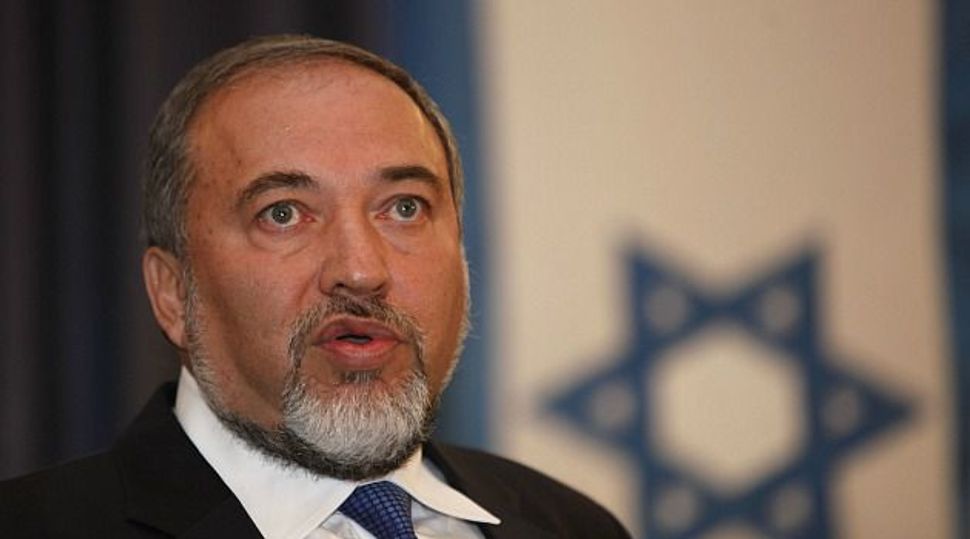 Pro-Israel activists who have long depicted Israel’s firebrand foreign minister, Avigdor Lieberman, as a marginal figure are now pondering how to explain his enhanced role to American politicians and others following Prime Minister Benjamin Netanyahu’s decision to merge his party with Lieberman’s and effectively make Lieberman his chief deputy.

Lieberman, a longtime lightning rod, has epitomized the concerns some critics voice about Israel’s commitment to democratic norms. They cite his objection to any move toward compromise with the Palestinians, his call to curb Israeli Arabs’ citizenship rights and his support for restrictions on Israeli civil society organizations, among other things.

Now, the merger of his party, Yisrael Beiteinu, with Netanyahu’s ruling Likud faction will give Lieberman control of one-third of the seats in the new, merged party’s political list as it prepares for upcoming elections.

“Likud’s merger with Avigdor Lieberman’s party is bad news for Israel,” said Ori Nir, spokesman for Americans for Peace Now, a dovish group on the left end of the Jewish organizational spectrum. “It will further isolate Israel globally and erode its image as a democracy and a legitimate member of the family of nations.”

But others, closer to the center, don’t see Lieberman’s embrace by Netanyahu as a drag on Israel’s image or on its relations with the United States, since the platforms of the Israeli government coalition and the Likud party that leads it have not changed.

“Israel’s government supports a two-state solution, as does ours, and the merger of their two leading coalition partners, and the emergence of others parties, like [Yair] Lapid’s Yesh Atid, seems to make a secular, centrist coalition even more likely after their upcoming elections,” said Josh Block, CEO and president of The Israel Project, a group focused on promoting a pro-Israel approach in the media and in public opinion.

The complexity of the Israeli political system and Lieberman’s divergence from formerly known patterns of right-wing politics have made it difficult to decipher the possible impact of the merger of his party — Israel’s third largest — with Israel’s largest political party. The Moldovan-born Lieberman staunchly opposes abandoning exclusively Jewish settlements on the Israeli-occupied West Bank in order to achieve compromise with the Palestinians. But he willingly accepted the Netanyahu government’s guidelines, which declare the government’s support for a two-state solution to Israel’s conflict with the Palestinians. On domestic issues, critics view him as the single biggest threat to equality and democracy in Israel. At the same time, he is staunchly anti-clerical and a consequent ally of liberals in their fight against perceived religious infringements on the rights of secular Israelis.

Lieberman first came to national attention when Netanyahu appointed him to be director general of the prime-minister’s office during the Likud leader’s first term as head of government, from 1996 to 1997. Lieberman then broke with the Likud, following what he saw as Netanyahu’s caving in to pressure from the United States in negotiations with the Palestinians. He later formed Yisrael Beiteinu, Israel Our Home, a right-wing party initially designed as a political voice for recently arrived immigrants from the Former Soviet Union.

Lieberman’s reputation as a politician on the extreme fringe came in part from his proposal to strip hundreds of thousands of Israeli Arab citizens of Israel of their citizenship as part of any future agreement with the Palestinians. Under his proposal, the geographic areas of Israel in which these Israeli citizens were concentrated would be transferred to a new Palestinian state. In exchange, the envisaged Palestinian state would agree to cede territory on which Israeli Jewish settlements sit in the currently occupied West Bank. Such a mass transfer of citizenship would violate international law without the consent of those affected. Lieberman initially made no provision for consulting Israeli Arabs about this but later changed his proposal to “transfer by consent.”

Lieberman’s domestic positions also provoke charges that he threatens Israeli democracy. Yisrael Beiteinu’s slogan in the previous elections was “no loyalty, no citizenship,” an allusion to the party’s proposed requirement that all citizens sign a loyalty oath to Israel as a Jewish state or face a loss of their right to vote. Many of Israel’s Arab citizens — almost 20% of the population — are seen as unlikely to make such a pledge.

Lieberman also described Arab members of Knesset who met with Hamas activists as “traitors” and suggested they be executed. He and his party led proposed legislation to curb the freedoms of and foreign funding of nongovernmental organizations that are working on issues relating to the rights of Arabs and Palestinians — a stance toward liberal groups that, in an Israeli context, echoed that taken by Russia’s president, Vladimir Putin, of whom he is a declared admirer.

Netanyahu’s decision in 2009 to appoint Lieberman as foreign minister raised many eyebrows. Besides his views on the Israeli-Palestinian conflict, some cited his penchant for undiplomatic declarations, such as his suggestion that Israel bomb Egypt’s Aswan Dam if the regime of then-Egyptian leader Hosni Mubarak continued to support the Palestinians. Critics feared that his stances would lead to conflict with the United States and with Western European nations.

But the widely anticipated clash never occurred. Israel’s new top diplomat quickly made clear that he would focus on relations with Europe and the rest of the world, and leave America to Netanyahu and his confidants. Instead, Defense Minister Ehud Barak became the prime minister’s point man for all contacts with the Obama administration. Secretary of State Hillary Rodham Clinton also politely evaded talks with her Israeli counterpart, limiting them to formal meetings during Lieberman’s two visits to Washington and to Clinton’s tours to Israel.

The Jewish community followed a similar pattern. Lieberman, who did not visit the United States frequently in his four years as foreign minister, was not a repeat guest at Jewish gatherings, and his ties with Jewish organizational leaders were limited.

A clear formula emerged for Israel and its supporters: Lieberman was described as a man of limited significance — neither a politician to be ashamed of nor a figure whom supporters of Israel wished to showcase.

The Anti-Defamation League’s national director, Abraham Foxman, has criticized Lieberman’s support for legislation he deemed anti-democratic in the past but now believes it is time for the Jewish community change its basic stance toward him. Lieberman’s move into the top ranks of the Likud should be seen, according to Foxman, as evidence that he is more of a pragmatist than many believe. “He has been painted as a bogeyman,” Foxman said, comparing Lieberman to legendary Likud leader Menachem Begin who was also shunned early in his career by those who referred only to his days as a militant underground activist.

Foxman has urged European foreign ministers, the U.S. Department of State and key leaders of the Jewish community to give Lieberman a second look. “Those who got a chance to meet him saw he is not a monster,” he said.

Daniel Sokatch, CEO of the New Israel Fund, a progressive philanthropy in the United States that funds many groups that Lieberman seeks to curb, remains skeptical. “His views toward minorities are very problematic,” he said. “It makes it that much harder to be an advocate for Israel.”

But even Sokatch admitted it is not a black-and-white picture. Lieberman could be NIF’s ally in promoting religious pluralism and civil marriage in Israel, he said. “I want to see a silver lining,” Sokatch said. “I hope things will now begin to move on these issues.”