How Big Was Obama’s Jewish Win? 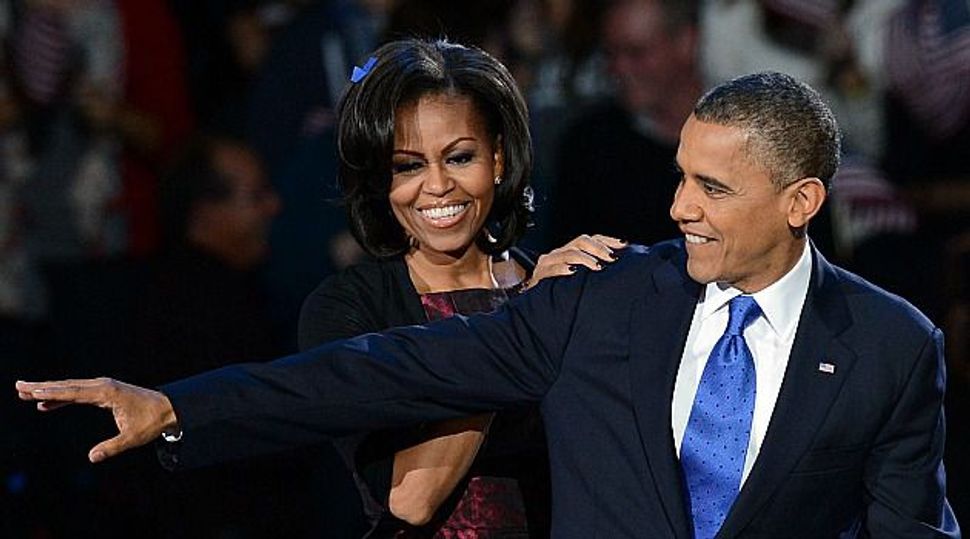 Parsing the Vote: President Barack Obama won a slightly smaller share of the Jewish vote in 2012, compared to last time, polls suggest. But what does it all mean? Image by getty images

It is a time-honored post-Election Day Jewish tradition.

As in years past, Republicans and Democrats dove into the numbers Wednesday in hopes finding data confirming that they won the elections — or at least put up a good fight.

For Republicans, any number indicating a Jewish shift toward their party is magnified; Democrats, on the other hand, seek to prove that these shift are merely marginal and the Jewish vote remains firmly in their grasp.

As the 2012 election results began to sink in, Jewish Republicans and Democrats disagreed not only about the meaning of the Jewish voting data, but also about the numbers themselves. Republicans view the outcome as a dramatic boost of 10% in Jewish support for their party, while Democrats are looking at numbers that put the shift of Jewish vote at only 4%. That, they argue, is virtually in line with the drop President Barack Obama suffered with all key Democratic constituencies compared to 2008.

And both have the numbers, piles and piles of numbers, to prove their point.

Sifting through the polling data makes clear that two key points remain undisputed. First, Jewish Americans are strongly committed to the Democratic side and stood out in their support for President Obama. The second fact is that there is a modest trend of shifting Jewish votes toward the Republican side and the 2012 elections continued this trend.

Beyond this point, everything gets hazy enough to stump the likes of Nate Silver, let alone a regular voter without a degree in statistics.

Exit polls conducted by a joint media consortium on election day found that 69% of Jewish voters sided with Obama and 30% chose Romney. 1% registered their vote as “other.” By all counts these results show a drop in Jewish support for Obama from 2008. But just how big was the drop?

Jewish Democrats noted that Obama received 74% of Jewish votes and therefore the decline in Jewish support amounts to 5 percentage points. The 74% baseline reflects a compilation of national and local exit polling data from 2008 which was completed last year.

Republicans, on the other hand, like to compare this year’s outcome to the initial national exit poll figure from 2008 which stood at 78%, thus reflecting a decline of 9 percentage points in support for Obama. Matt Brooks, executive director of the Republican Jewish Coalition, called 78% the “gold standard figure” for analyzing the ’08 Jewish vote. Obama supporters argued, in response, that it would be wrong to use partial exit poll data when more accurate information exists.

The difference is significant. A 9 percentage point shift, as Republicans see it, would indicate major success for efforts to sway Jewish voters away from the Democratic side. On the flip side, a 5 percentage point decline could be seen as reflecting the general drop in support for Obama. The president won by a popular vote margin that was about 3 percentage points less than he did in 2008. In many core Democratic constituencies except African-American and Latino voters, support in 2012 dropped by similar amounts.

“The shift in Jewish vote reflects the shift in other constituencies,” said Democratic pollster Jim Gerstein who conducted a Jewish vote survey for J Street on election day. Other Democrats described the 4-to-5 percentage point change as being within the statistical margin of error.

The figures also vary slightly depending on the party conducting the polling. J Street’s pollwhich was carried out by calling Jewish voters after they cast their ballots on Tuesday, found the Jewish vote split 70/30 in favor of Obama on the national level. In Ohio 69% of the Jewish voters supported Obama and in Florida 68% voted for the Democratic candidate. A similar poll commissioned by the RJC and conducted by Arthur Finkelstein found only 60.8% of Jews voted for Obama, with 7.6% either refusing to answer or stating they voted for “someone else” and 31.6% for Romney. This, Republicans say, is a dramatic increase in Jewish support for a Republican candidate.

Both sides also disagree over what drove Jewish voter to choose either candidate. Gerstein’s poll asked voters to list the most important issues determining their vote and found that just as any other segment of the population, most Jewish voters (53%) were primarily concerned with the economy and that Israel was a determining issue for only 10%.

Finkelstein’s survey paints a different picture. The RJC poll asked voters how important issues concerning Israel were in deciding for whom to vote and found 76.5% describing Israel as an important issue. The reason for the significant disparity lays in the formulation of the question.

The dispute between Democrats and Republicans over how the Jewish vote broke could be viewed as no more than a fight over organizational prestige, but at least on the Republican side it has to do with the group’s reason for existing. RJC has poured an unprecedented amount of money this election cycle on trying to convince Jewish Americans to vote Republican, stressing the issue of Israel as a key selling point. Any result short of a significant shift could put in question the need for such an investment.

Brooks said he believes his group’s numbers show “we got a good return on the investment we made,” since the results are “very significant in terms of moving the needle in the Jewish community.”

Gerstein, on the other hand, argued that, “all this money spent trying to move the Jewish vote on Israel didn’t matter.” He pointing to his research that showed Jews in Florida were not swayed by watching TV ads criticizing Obama for his policy on Iran and Israel.

Adding more to the data dump on Jewish election polling, Jewish Democrats released on Wednesday data from a survey the National Jewish Democratic Council had conducted for internal use during the last months of the campaign. The poll carried out by the Mellman Group, concluded that a counter campaign led by Jewish Democrats in Florida succeeded in offsetting Republican gains seen after an intense ad campaign directed at Jewish voters. Democrats assert it won back more than 100,000 voters, potentially enough to have swung the election in their favor in the Sunshine State.

Much of this polling and data analysis dispute is done with big donors in mind. Republicans and Democrats struggle to keep interest in funding outreach efforts to Jewish voters. Ari Flesicher, a former spokesman in George W. Bush’s and RJC activist, said that at a time of decline in support for the GOP among other constituencies, Jewish voters have special importance. He pointed to the swing states of Ohio and Florida and said the battle in these states wouldn’t have been that close without Jewish voters increasing their support for the Republican candidate.

Jewish Democrats have argued this election cycle that an increase in GOP efforts to gain Jewish voters requires them to boost their operations as well, in order to stop any possible bleeding toward the Republican side.

How Big Was Obama’s Jewish Win?