Rise of Latino Voters Is Wake-Up Call for Jews 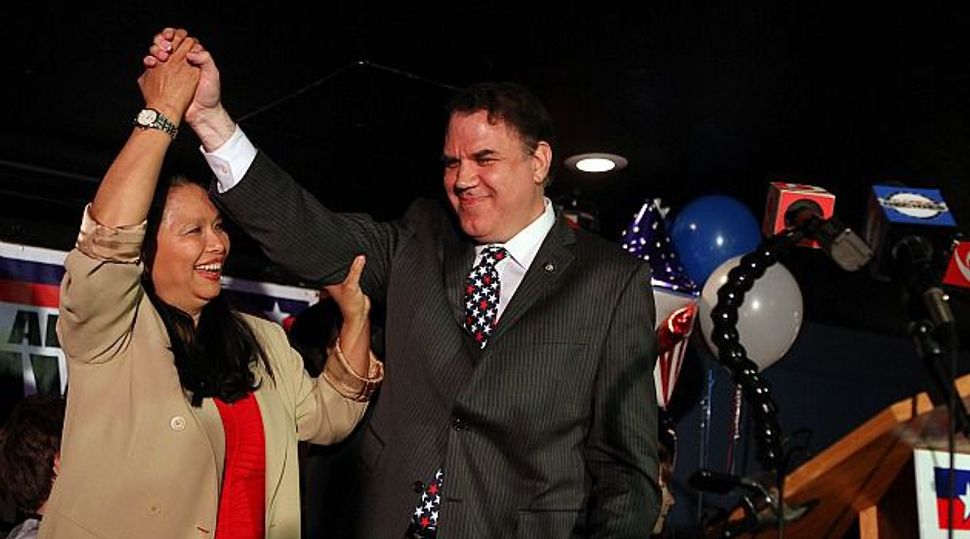 Forging Alliance: Rep. Alan Grayson (D-Fla.) celebrates his return to congress, a victory that was achieved by winning the support of Puerto Ricans in central Florida. Image by orlando sentinel

America’s new political demography, as exposed by the 2012 presidential election results, has delivered a wake-up call to Jewish communal leaders.

The rise in power of Latino voters, coupled with the continued increase in African-American participation and the greater attention paid to women voters, is compelling some Jewish leaders and analysts to reexamine communal coalition strategies. In particular, key activists are considering how outreach to these groups for support on Israel — still the number one priority for many Jewish groups — may require reciprocity when it comes to the priorities of these other communities.

Latinos, widely viewed as the big surprise of the 2012 elections, have their own communal agenda, analysts and activists explain, one that is crucial for Jews to understand.

“Clearly, it was not the Jewish vote that played a critical role in these elections,” said Jonathan Sarna, professor of Jewish history at Brandeis University. “It was the Hispanic vote.” And this, he said, has real implications for the Jewish community.

In the first half of the 20th century, said Sarna, Jews were at the forefront of the battle for the issue at the top of today’s Latino agenda: liberalized immigration.

“We owned it,” he said. But as Jewish immigration dwindled, activism on the issue was no longer a central pillar of Jewish advocacy. “The Jewish community has not made immigration reform a significant issue in recent years,” said Sarna. “We have not done enough in building bridges with the Hispanic community.”

A recent survey conducted by the American Jewish Committee among Latino Americans found that Jews and Latinos live parallel lives and do not mingle. They live in separate neighborhoods in major cities including Los Angeles and Chicago.

“Latinos see Jews as part of the white establishment, not as immigrants,” said AJC’s Latino and Latin American Institute director, Dina Siegel Vann. “We need to convey to them that we share a history of immigration.”

Rabbi Marc Schneier, founder and president of the Foundation for Ethnic Understanding, a group dedicated to reaching out to other minority communities, observed that in Jewish-Latino outreach meetings, “we share our commonalities and then go home.”

“There [have been] enough dialogues,” he said. “We need to take it to the next level. It’s about fighting each other’s battles.”

While acknowledging the need to increase ties with the Latino community, Jewish and pro-Israel advocates pride themselves on long-standing joint programs and dialogue forums with Latinos. On November 11, for example, a mission of Jewish and Latino community leaders from the United States went on a joint trip to Mexico, meeting with the country’s new president-elect and other officials. The mission was organized by the AJC, which has been leading Jewish outreach efforts to the Latino community. “Now, after the elections, nobody can deny that the Latino influence is growing and is here to stay, and we need to take it into consideration,” said Siegel Vann in a phone interview from Mexico City.

“The Latino community as well as the African-American community do not necessarily have Middle East policies per se, so we are trying to work with them,” said William Daroff, vice president for public policy at the Jewish Federations of North America.

Partnering with the Latino community is based, activists explain, on shared concerns, primarily immigration and foreign policy. And pro-Israel groups have identified what they see as an opening for shaping Latino views on the Middle East from a pro-Israel perspective.

The recent AJC survey found that both Latino émigrés to the United States and Jewish Americans share strong feelings toward their previous or national homelands — a potential point of affinity for the two communities on Israel. Latinos in the U.S. support their families in their homeland with remittances, noted Siegel Vann, just as Jewish Americans show support to Israel through donations and political support.

Finding such points of common ground could be crucial. Latinos made up 10% of the electorate nationally and played an even greater role in key swing states including Florida, Colorado and Nevada. In Florida, the Latino population grew by 44% over the last decade and comprised 17% of the state’s electorate in this election. First generation, anti-Castro Cuban émigrés once tilted this voting bloc to the right and toward the GOP. But a growing non-Cuban presence and the moderation of younger Cubans led to a political flip in 2008. That year, more Latinos registered as Democrats than Republicans for the first time. Today, 39% of Florida’s Latinos are registered as Democrats and 29% as Republicans.

Nationally, the Latino vote went overwhelmingly to President Obama, with 71% supporting him and only 27% giving their vote to Republican challenger Mitt Romney.

Jewish groups have been vocal in their support for immigration reform. And most major Jewish organizations have partnered in coalitions advocating comprehensive reform that would provide undocumented immigrants with a path to legalization.

But redoubling efforts to take on issues concerning the Latino community would require a shift in Jewish communal priorities. Rabbi David Saperstein, director of the Reform movement’s Religious Action Center, said that synagogues and community relations councils, which are tasked with building bridges to local communities, are dedicating most of their efforts to the issue of Israel at the expense of a broader agenda.

“We need to strengthen our universal agenda because we cannot win on issues close to us without coalitions,” he said. Saperstein urged Jewish grassroots institutions to expand their work on issues of civil rights, women’s rights and economic justice. “We have told rabbis and community leaders since the elections that this is a reminder that we need to reach out to other communities — to Latinos, Asian, Hindi and others,” he said.

Some within the Jewish community have already experienced the political advantage in partnering with diverse minority groups. The American Israel Public Affairs Committee, the largest pro-Israel lobbying group, has increased its outreach to African-American communities on issues relating to Israel. Last year, a first-ever Jewish–Latino Congressional caucus was formed.

Perhaps the most striking example of reaping political benefits from strong ties with the Latino community comes from a congressional race in Florida, where Jewish Democrat Alan Grayson returned to the capital after losing a congressional seat two years earlier. Grayson’s return was paved with the strong relations he established with the local Puerto Rican community in his district, ties that proved useful in the Democratic primary and on Election Day.

Similarly, Jewish congressman Steve Cohen of Tennessee has handily won all his reelection bids, even after redistricting cut him off from the Memphis Jewish community, thanks to his close relationship with the local African-American community.

Both House members have been vocal on Israel-related issues while representing their constituents. Grayson has been close to the American Israel Public Affairs Committee and the mainstream Israel lobby, and strongly defended Israel’s 2008 military campaign in Gaza. He has spoken out on the need to stop Iran’s nuclear program. Cohen, who has been endorsed by the more dovish J Street, has criticized the hawkish policies of the current Israeli government, led by Prime Minister Benjamin Netanyahu.

Another voter group that has won special attention in recent elections is women voters, primarily young women, who leaned heavily toward the Democrats. The issues at stake, including abortion rights, access to contraceptives and remarks by Republican candidates about God’s will when pregnancy results from rape, were seen as driving women away from Romney.

By and large, Jewish leaders feel in tune with an agenda supportive of abortion rights and other issues seen as supportive of women.

“We are very much so. Very, very much so,” said Nancy Kaufman, CEO of the National Council of Jewish Women. The Jewish community, she argued, has been ahead of the curve on all issues relating to women’s rights.

The liberal tendencies of the Jewish communities could also come in handy as support for gay marriage becomes widespread. Three states, Maryland, Washington and Maine, approved ballot initiatives allowing gay marriage, and voting has also led to the election of the first openly gay senator, Tammy Baldwin of Wisconsin.

In general, the Jewish community has been actively supportive of gay rights and has succeeded in engaging with the LGBT community on a broad array of issues including Israel. Even conservative Jewish columnist Jennifer Rubin, writing for the Washington Post, called on the Republicans to abandon their battle against gay marriage, viewing it as a lost cause.

Still, for Orthodox Jews, a small but growing faction within the community, gay marriage poses a problem. Nathan Diament, executive director for public policy at the Orthodox Union, said that while disapproval of legally recognizing same sex marriage is widespread among Orthodox Jews, they “are not in favor of discriminating against gay individuals.” He stressed that the main goal of his group will be to ensure that legislation legalizing gay marriage does not infringe on liberties of religious groups.

Rise of Latino Voters Is Wake-Up Call for Jews