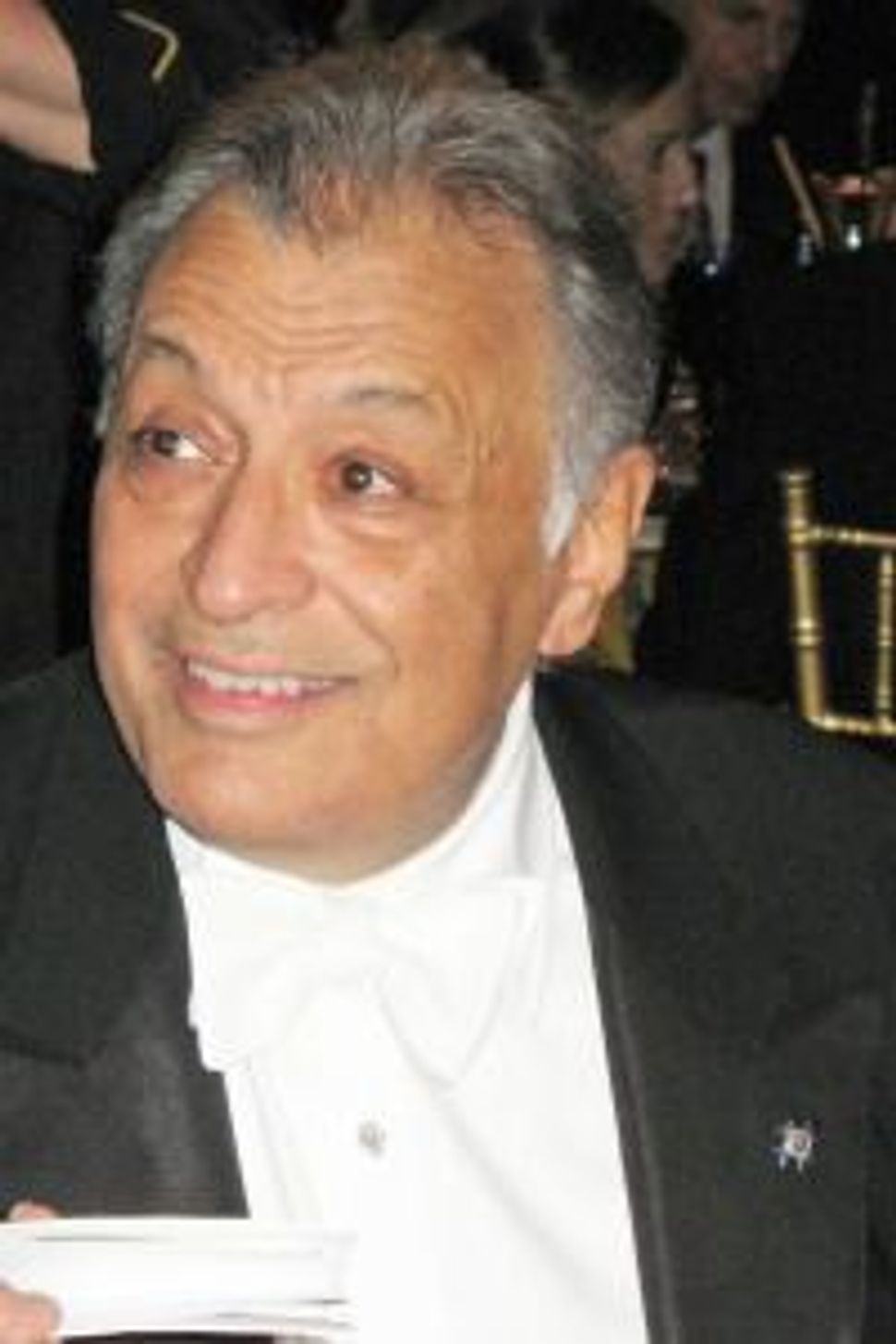 “Zetst zikh avek!” — “Sit down!”— said Zubin Mehta, music director and conductor for life of the Israel Philharmonic Orchestra, in beautifully articulated Yiddish at the American Friends of the IPO dinner, held at The Plaza. The dinner followed the IPO’s October 25 Carnegie Hall concert. 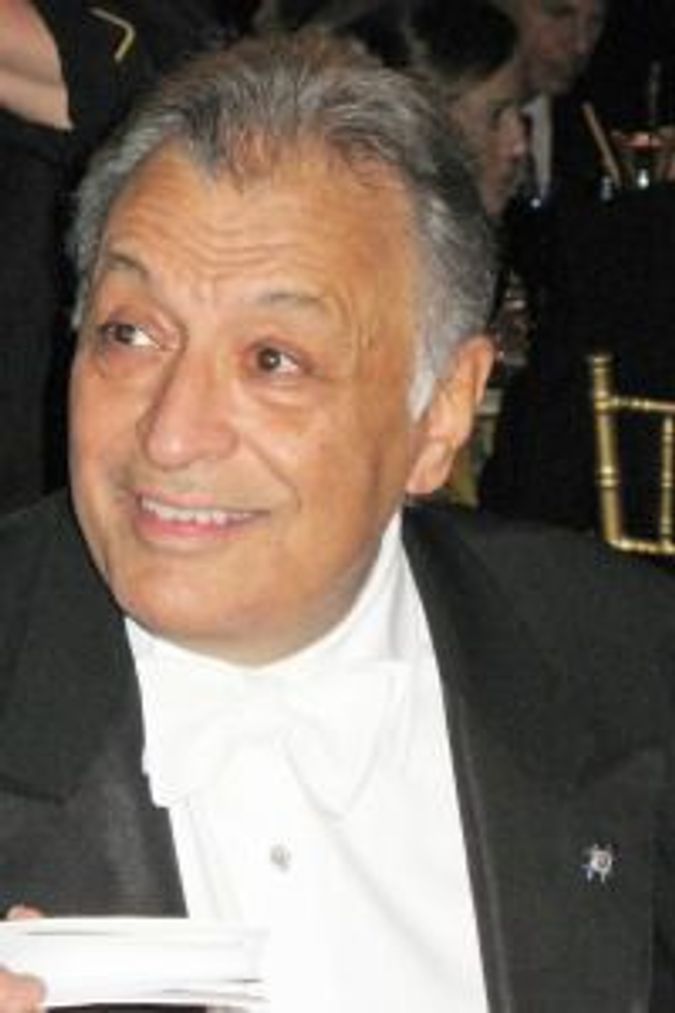 “We are today the positive face of Israel,” he continued in English, addressing the 450 guests — who raised $1.8 million — seated at candlelit tables. “Israel has many institutions to be proud of — universities and scientific institutes. But they, unfortunately, cannot travel. We will be giving a New Year’s Eve concert in the Great Hall of the People in Beijing and then going all over China. We have been going to China since 1993 [and] the first time, we played in a little hall with Itzhak [Perlman].” Recalling his puzzlement at having a television camera present at the time, Mehta chuckled and said, “We were told it was only a local broadcast — just 200 million people!”

Lauren Veronis and her husband, John Veronis, lauded their co-host, Adrienne Arsht, for underwriting the concert. Veronis also thanked a roster of “fellow underwriters,” including Rita and Charles Bronfman; Ingeborg and Ira Leon Rennert; Lily Safra; Alfred Moses, ambassador to Romania, and his wife, Fern Schad; Judith and Burton Resnick; Rochelle and David Hirsch; Shulamit and Chaim Katzman, Penny and Claudio Pincus, Jo Carole and Ronald Lauder, andSara and Charles Fabrikant. She acknowledged “Terre Blair Hamlisch, who with her late husband, Marvin Hamlisch, co-chaired the event last year and was meant to co-chair it this year.”

Having changed, from the form-fitting sleeveless green velvet gown that she wore at her Carnegie Hall performance, into a black strapless dress, pianist Yuja Wang was warmly greeted by the festive dinner crowd. She was still aglow from the standing ovations she received earlier that evening at Carnegie Hall’s Isaac Stern Auditorium. Her unaccompanied piano encores — a rendition of “Figaro” from Rossini’s “Barber of Seville,” and the “Habanera” from Bizet’s “Carmen” — were astonishing. Wang had just returned from Israel, where she performed nine concerts and opened the IPO’s 2012–13 season under the baton of Mehta.

“This orchestra is not just an orchestra,” Veronis said, “it is the cultural heart of Israel, and for many around the world the only visible presence of Israel.… Last year the orchestra played more than 150 concerts around the world — the U.S., Europe, Australia, back to China, Korea, Thailand… and is about to tour South America. Ten days ago, Israel’s president, Shimon Peres, conferred the presidential medal of distinction on Zubin. Among his comments, Peres said, ‘You came here to conduct an orchestra, but you became the conductor of our hearts….. I cannot think of anyone else who has offered such a unique contribution to our country, to our people, to our mood. You have shown leadership. A leader is born to allay the spirit and hopes of the people. That is what you did.”

I finally got to see the completed “Orchestra of Exiles,” a documentary byJosh Aronson about violinist Bronislaw Huberman, who founded the Palestine Orchestra. The orchestra’s first concert, in Israel in 1936, was conducted by Arturo Toscanini. In 1948, it became the Israel Philharmonic Orchestra, led by Leonard Bernstein. As Aronson told me during an interview in October 2011, when the film was a work-in-progress, “Huberman saved 1000 Jewish lives — 60 to 70 musicians and their families. This was a Jew saving Jews!”

Huberman was born in Czestochowa, Poland. A musical child prodigy, he visited Palestine for the first time in 1929 and, according to filmmaker Aronson, “felt he found a home.” The film is chock-full of cameos, music and historical tidbits that should delight anyone who savors classical music.

I asked Aronson about the Kulturband, established with Goebbels’s blessing for Jewish musicians only. I told Aronson that “watching the film’s progressive march of Nazi edicts — not only against Jews in general, but their star Jewish musicians — you almost want to shout at the screen: ‘Get out! While you can,” He replied, “The Kulturband was formed because Jewish musicians were integral to Germany’s music landscape.” And yet, its creator “ended up in Thereisenstadt.” “You can’t do business with the devil,” Aronson said. “The alternative — who knew? They all thought it would blow over.”

When I asked Aronson what his hope for the film was, he said: [“After its theatrical run, it will hopefully have a long life in educational settings—universities—to see the actions of Huberman, who said ‘No!’ to concerts in Germany, [desert] his most lucrative audience . He walked away from half his professional income, on a dime, cutting all ties to Germany, as did Toscanini. “

Scheduled to reopen in New York on November 16 at The Village Quad, “Orchestra of Exiles” is traveling the country with its final screening in April 2013, in Santa Barbara, Calif.