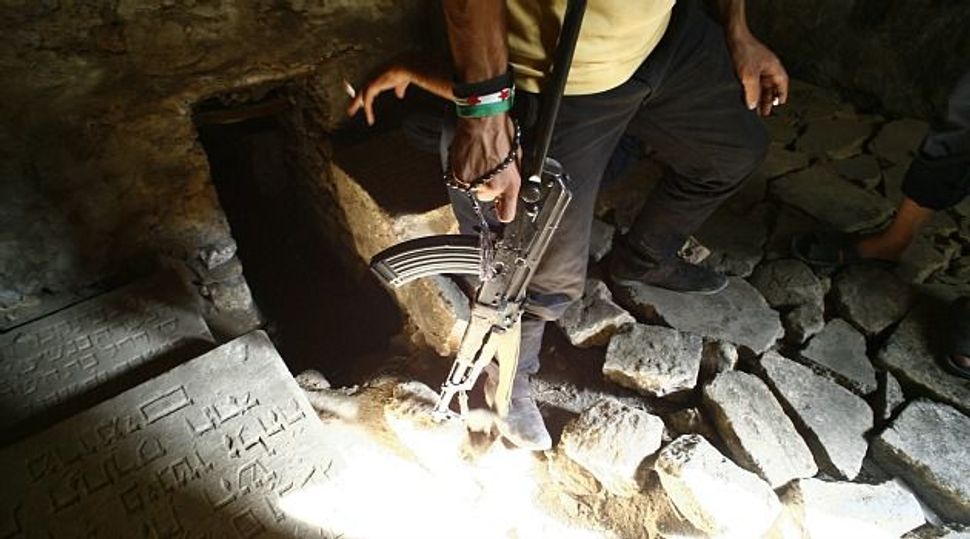 As we wound our way through the rebel-controlled neighborhoods of the decimated streets of Aleppo, I could hardly recognize what was once one of Syria’s most prosperous cities.

This part of Syria’s second-largest metropolis, a town once storied for its ethnic diversity, was now a pockmarked jumble of cratered ruins, even as life in government-controlled areas of the city continued in relative normalcy.

Mahmoud, my guide through the rebel-held part of the city, was giving me a cook’s tour of the recently bombed areas, when suddenly he halted. “We’re here,” he announced with a quick glance. “The Jewish cemetery.”

What lay before me was an abandoned cemetery sprinkled with concrete, shrapnel, and ammunition — all a product of recent government bombing. Upon closer inspection, the tombstones revealed a familiar surprise: Hebrew inscriptions.

“This city has many, many layers of ghosts,” he responded with a knowing gaze.

Like others in this article working with the Free Syrian Army, Mahmoud, a 26-year-old English teacher who joined the rebels after the government’s brutal crackdown on Aleppo, asked that his full name not be used to protect his family. He is a pluralist-oriented, progressive young man. So I had shared with him that I had spent a significant amount of time working and studying recently in Israel, where I had worked toward my Master of Arts in political science from Ben-Gurion University. I also asked him about the Jewish community of Aleppo, explaining that family members of my Israeli landlord were among the 30,000 Syrian Jews that had fled Aleppo and other Syrian cities since Israel’s establishment in 1948.

Now, however, we were not focused on history. Mahmoud was showing me the war’s most recent battleground — the Old City of Aleppo, which also happened to be the site of the city’s historic Jewish neighborhood.

Most Syrians I encountered in Turkish refugee camps and in rebel-held Syria during October and November remembered the Syrian Jewish community and were quite willing to discuss this part of their past. They also spoke of their own views and experiences related to Israel as Syrians living under a government that demonized it.

Ahmad, a 28-year-old internet activist who fled to Turkey in August, described to me how the regime of Syrian President Bashar al-Assad and his father and predecessor in office, Hafez al-Assad, created a society permeated by an anti-Israel enmity that spilled over into many areas of life. He recalled a grammar school history lesson during which he once asked a question about Israel that resulted in the interrogation and harassment of his entire family because he referred to the country by its name rather than as “the Zionist entity.”

“I hadn’t realized it would be such a big deal,” he said, “I was just a kid, but it put my parents at risk of being accused of being Israeli spies.”

This accusation, espionage for Israel, is the most severe allegation that one can be charged with in Syrian society. Years later, Ahmad told me, agents of Syria’s National Security Agency tortured him — sticking needles under his nails before ripping them out with pliers and forcing him into stress positions and extreme sleep deprivation — when he returned home from an American-certified computer science program in Qatar with an envelope that was related to the program and was marked “ISL.” The envelope had come from America, and Ahmad had no idea what the acronym was. The security agency claimed it stood for “Israel” and said it meant he was a spy.

In Aleppo, Hassan, an FSA commander who is known commonly as the General, shared his family’s personal connection to the Jews of Aleppo and his inherited knowledge of Aleppo’s vibrant past.

“My father said Jews were a major part of this city,” the General recalled during an Eastern Mediterranean dinner of mixed meze, or small dishes of hummus, eggplant and similar fare. He claimed that his father’s uncle had been married to a Jewish woman and that the government had rounded up their entire family during an escalation of tensions with the early Zionists of Palestine. They were subjected to a rough interrogation, threats and the brief imprisonment of one of his brothers on suspicions of Zionist espionage, he said. The uncle and his Jewish wife fled to Turkey and then to Latin America after this incident, the General recounted.

“It just got worse in 1948, so most of them left,” he explained. “Those that couldn’t lived under all sorts of discrimination and suspicion until they were basically no longer considered Syrian.”

Both Mahmoud and the General talked about Israel while being careful to distinguish between Jews and the Israeli state, a state they regard as a form of Western neo-colonialism. It’s a view that many Arabs espouse.

Most of the Syrians I encountered spoke about the injustices faced by their Palestinian brothers and expressed frustration about the geopolitics of Israel and Iran. In their view, the Iran-Israel face-off limits the West’s ability to intervene in Syria on their behalf. Interestingly, however, I found some consensus among the rebels that Israel is the country that will intervene militarily to their benefit when — or if —Assad moves or uses his cache of chemical weapons against the opposition.

“Of course we’re most worried about this,,” Mahmoud said, referring to the possibility that the government could deploy chemical weapons. His leg trembled as he spoke. “After seeing how [Assad] has targeted hospitals and schools, and what the shabiha [pro-Assad militias] have done in the villages, we’re not being paranoid.”

“Israel is and should be concerned about the chemical weapons getting into the wrong hands,” the General added. “So if [Assad] moves on us with them, Israel will get involved.”

Israel came into play in other ways when the Syrian rebels analyzed their situation. Khaled, a car salesman-turned-FSA-gunrunner after Assad shelled his garage, vented about the steady flow of foreign fighters and the growing influence of Muslim fundamentalists known as Salafists within the FSA ranks. A secular Syrian from the Aleppine countryside, Khaled spoke of religious fighters from Afghanistan, Chechnya and the Gulf, and even a handful from the West infiltrating the opposition’s struggle. He explained that they come with much needed funds for the opposition but espouse aims and values different from the majority of FSA fighters.

“We’re fighting against a psychotic dictator who forbids democracy and now wants to kill us all,” Khaled explained. “The foreign fighters. They’re using our struggle to get closer to Jerusalem.”

Of course, aside from such snippets of commentary, Israel and the Jewish community of Aleppo’s past are far from the minds of most Syrians these days. They are busy discussing Assad’s savagery, the FSA’s latest gains, their discontent with President Obama and their hopes and fears for Free Syria.

“We all know that the Jews are our not-very-distant brothers, but sometimes that’s who you get along with the least, the group you’re most similar with,” the General reflected, exhaling a hit from his shisha. “History is repeating itself now in Aleppo, this time with the Alawis [Muslims] attacking us. I guess it gets uglier the closer you are to your enemy.”