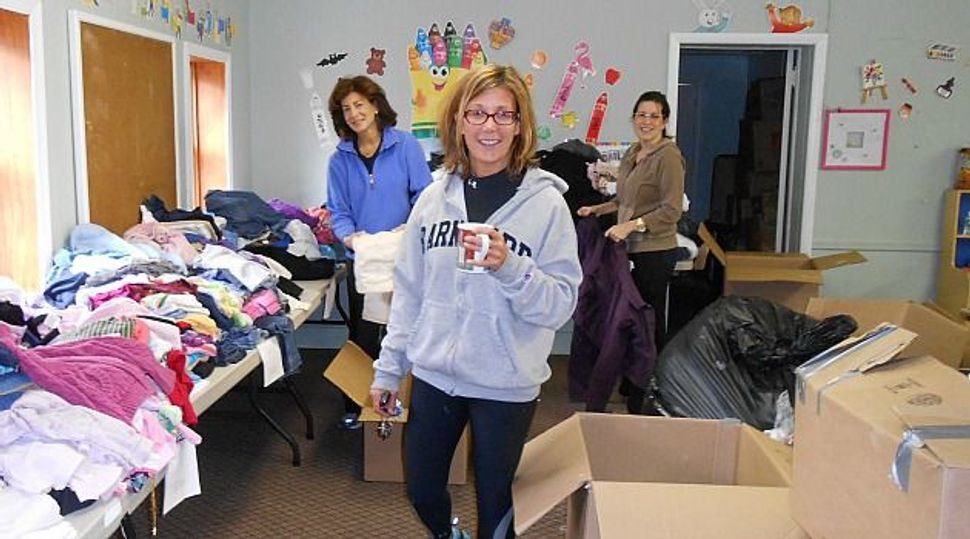 As New Jersey’s shore residents struggle to rebuild destroyed homes and lives after Hurricane Sandy, Rabbi Ellen S. Wolintz-Fields has seen a peculiar aspect of the crisis firsthand: Her tiny congregation has only grown in influence as the long-term impact of the storm’s destructive force deepens.

Wolintz-Fields, spiritual leader of Congregation B’nai Israel here, presides over one of many small Jewish communities that dot the shore. For years they have served as modest redoubts of communal and spiritual sustenance to a reliable core of congregants. But in the wake of the storm, Wolintz-Fields’s congregation, like others in the area, has seen attendance at services jump, along with levels of involvement in the synagogue’s life.

The 327-member congregation has furthermore formed new relationships with the larger community outside the synagogue’s walls, extending its reach beyond its small numbers in a new way.

“We opened up our synagogue for anyone in the community who didn’t have any heat or electricity, food or a warm space, or just [people who needed] to charge devices,” Wolintz-Fields said. “I honestly feel whoever needs the help at this point, we don’t care who we were taking care of. We just wanted to take care of people.”

B’nai Israel itself didn’t incur any flooding or structural damage during the storm, and retained electricity in the following days. Those fortunate circumstances, Wolintz-Fields said, allowed her synagogue to immediately set up a call center to provide updated relief information to affected families. Congregants quickly volunteered to travel door to door to check on elderly residents from the congregation and to update out-of-state family members on the condition of those stranded. B’nai Israel’s president, Philip Brilliant, said it was imperative that he know the condition of each of the congregation’s families. The severity of some families’ situations wasn’t revealed until those families showed up for services.

Brilliant said that at the first Friday night service after the storm, it was easy to tell which attendees did not have heat or even habitable homes. “They were all bundled up,” said Brilliant, who noticed both new faces and ones he hadn’t seen in a while. “After services, other congregants took them home, to warm homes with power. They know them maybe three days out of the year, but didn’t take ‘no’ for an answer.”

Brilliant, who didn’t have power in his own home for 16 days after the storm, said other congregants have also taken in non-Jews who have lost houses. “I would say there’s no line of religion in this situation,” he said. “Some they know from business relationships. Whether business, friendships, religion, it’s all blending in to help out.”

Wolintz-Fields and Sandy Ottenberg, a 73-year-old nurse who volunteers for Hadassah, visited local shelters where almost none of the displaced were Jews, offering moral support for victims who had lost houses. Wolintz-Fields steered clear of religious conversations while consoling families.

“Someone tried to begin a conversation of who killed Jesus, and I stopped them and said we’re here to comfort you, not debate religion. And he said, ‘You know, you’re completely correct.’”

Wolintz-Fields’s words also helped Jewish victims re-evaluate their own beliefs. Recently, Toms River Police Chief Michael Mastronardy called the rabbi and asked her to speak with a resident of Ortley Beach who had just returned to her own house for the first time since the storm. The woman came to the phone crying hysterically. The only item she had found intact was her grandmother’s menorah. After speaking with Wolintz-Fields about faith, the woman said to the rabbi, reflecting, “I drifted from Judaism, but that menorah I always had.”

Brilliant said he noticed tighter familial bonds drawing new people into the congregation’s circle. “I always used to kid that volunteerism is very low in our congregation and I always see the same faces,” Brilliant said. “I saw those same faces, but they were joined by their families. It became a family unity. I didn’t see a mother who didn’t come without her husband and kids.”

After he learned of displaced residents in Hispanic immigrant communities in the neighboring Lakewood Township, Brilliant had B’nai Israel collaborate with a local church to send them extra clothes and supplies. And such interfaith efforts were prevalent among these small Jewish enclaves. Judy Smith said that the Jewish Community Center of Long Beach Island, of which she is vice president, was spared physical damage, and so use of its building was offered to the nearby, heavily damaged St. Francis Community Center, which remains closed indefinitely.

B’nai Israel planned to host interfaith Thanksgiving services with local churches, as did Temple Beth Or in Brick Township. The Jewish Federation of Ocean County, a coalition of eight synagogues — one Orthodox, five Conservative and two Reform — that includes B’nai Israel, also extended services to the large, yet insular ultra-Orthodox population in nearby Lakewood, even providing kosher meals-on-wheels service for their elderly. “It’s not federation turf as such, but they’re all Jews and we’re trying to help everybody,” said Danny Goldberg, the federation’s executive director.

Wolintz-Fields does not yet know if the growing involvement and work of her congregation will continue. Nor does she know how its recent experiences will change the congregation in the future. Wolintz-Fields is an avid photographer and a scrapbooking hobbyist, but said she has had difficulty sorting through the memories of the past few weeks.

“One memory I do remember, the week before the storm hit, my friends and I were on the boardwalk at Point Pleasant for the breast cancer walk,” she said, explaining that one close friend is a survivor. “Then we’re watching the newscasters on the same boardwalk when it was being destroyed. I have memories of bringing my kids to those boardwalks. I think about how so many people have lost their physical items — there so much in life we really can’t control — but mental memories are always with you.”