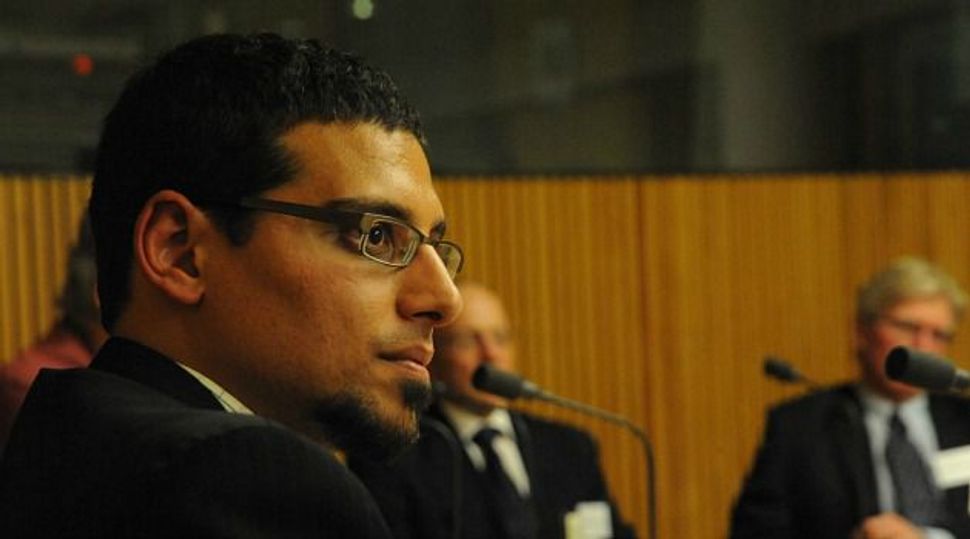 Come Clean: Manny Waks, an advocate for child sex abuse victims, believes the leadership of the Australian Jewish community is not being forthcoming about the latest sex scandal. Image by tony fink

Another major Jewish organization in Australia is embroiled in a child sex abuse scandal, adding to the trauma triggered by recent revelations of similar cases involving students at two schools in Melbourne, run by Chabad and Adass Israel, respectively.

Because of a suppression order issued by an Australian court, the name of the organization, the alleged sexual abuser and the alleged victims cannot be disclosed.

The Forward can, however, reveal that a man faced Melbourne Magistrates Court on more than 25 counts of child sex abuse, including indecent acts with a minor and sexual intercourse with a child.

Despite the involvement of the unnamed Jewish organization in the case, the defendant is not believed to be Jewish. He entered a “not guilty” plea and is scheduled to face court again in December, with a trial date expected to be set for next year.

The alleged sexual abuse is understood to have taken place during an overseas trip about a decade ago.

A representative for the Office of Public Prosecutions also confirmed to the Forward that there are multiple complainants. Not all of them are believed to be Jewish.

News of this latest scandal came just days after Prime Minister Julia Gillard called for a royal commission of inquiry into the “insidious evil acts” of institutional child sexual abuse across religious denominations in Australia. Royal commissions are established in Australia when the judicial system is deemed to have failed. Although the terms of reference have yet to be finalized, they have powers of subpoena.

While the Catholic Church has borne the brunt of the media’s blowtorch, the Jewish community has been implicated since 2008, when news first broke of sexual abuse allegations against Israeli-born Malka Leifer, former principal of Melbourne’s Adass Israel girls school.

The chief rabbi of Adass, Avraham Zvi Beck, and other officials have been accused of helping Leifer flee Australia for Israel as soon as the allegations — denied by her — emerged within the tightly knit, non-Zionist, Yiddish-speaking community in 2008.

David Cyprys, a former security guard contracted to the college, will stand trial next July on 41 counts of child sex abuse, including child rape. He has pleaded not guilty.

Another alleged perpetrator, David Kramer, is a former teacher at Yeshivah College, which is part of the Chabad movement’s Yeshivah Centre, in Melbourne. Kramer is awaiting extradition from America, where he was jailed in 2008 for molesting a 12-year-old boy in a St. Louis synagogue. In October, a judge in the United States approved the extradition order to Melbourne, where he is wanted by police investigating claims that he molested four boys attending Yeshivah College between 1989 and 1992.

Timmy Rubin, a Lubavitcher who runs a mikveh in Melbourne, told the Forward: “We understand why Julia Gillard made that decision, but we are nervous for certain people in our community,” she said. “Some people are really nervous because 25 years ago, they probably did the wrong thing.”

Rubin, who services some Adass women at the ritual bathhouse, added: “With Adass, the problem is that nobody pressed charges, and that’s why she got away with it. People whose daughters were mucked around with were furious, but they were scared to press charges because they didn’t want their girls to be shamed in the community — that’s the real tragedy.”

Shlomo Boruch Abelesz, a former secretary of the Adass Israel community, told the Forward, “The fact that there don’t seem to have been any abuse claims for a number of years now shows that the Jewish schools have tackled it and cleaned up their act.”

In the Yeshivah College case, it is alleged that Rabbi Yitzchok Dovid Groner, the Brooklyn-born chief rabbi of Chabad in Melbourne until his death, in 2008, helped cover up allegations of child sex abuse and gave alleged perpetrators the option to flee the country or be reported to authorities.

But many inside the Chabad community feel that Groner’s reputation has been besmirched by the sex abuse scandal, especially since he cannot defend himself. Groner was sent by the Lubavitcher Rebbe to Melbourne in 1958 and is widely credited with putting Chabad on the map in Australia, building a network of educational, religious and outreach institutions.

The commission may summon Rabbi Avrohom Glick, the principal of Yeshivah College at the time of most of the alleged offenses. In his original statement, Glick said he had only recently become aware of the accusations about Cyprys, but in May he changed his story under oath, admitting that he was in fact aware of rumors in the early 2000s.

Magistrate Luisa Bazzani sharply questioned even Glick’s revised position, saying it was “unfathomable” that he was not aware of the alleged abuses in the 1980s.

A senior member of the Orthodox community in Melbourne, who spoke on condition of anonymity, said those rabbis in Chabad and Adass “who knew of cases and turned a blind eye, or didn’t bring them to the attention of the authorities, will be named and shamed. It’s absolutely inexcusable.”

Following Gillard’s announcement of a Royal Commission, the current Yeshivah College principal, Rabbi Yehoshua Smukler, issued a statement commending the prime minister’s move. “Child abuse is abhorrent and has traumatic consequences for victims and their families,” he said. “Yeshivah takes child protection very seriously and will fully cooperate with the royal commission and continue to act vigilantly to eradicate abuse.”

But Waks, who has become an unofficial spokesman for the alleged victims, was underwhelmed. “The Yeshivah leadership has excelled in doublespeak: They inform the public that they are cooperating fully with the relevant authorities, yet in private they are engaged in the most vile and irreligious acts,” he told the press.

Waks, who claims that his family has been victimized by fellow Lubavitchers critical of his public exposure, said that more alleged victims have come forward. “I’m receiving more and more allegations of child sexual abuse coming from the Melbourne, Sydney and Perth Jewish communities,” he said.

But in a statement on November 14 the Rabbinical Council of Victoria backed the commission, saying that it “reminds the community that alleged halachic reasons to refrain from reporting abuse to the police or other relevant authorities are completely without foundation.”