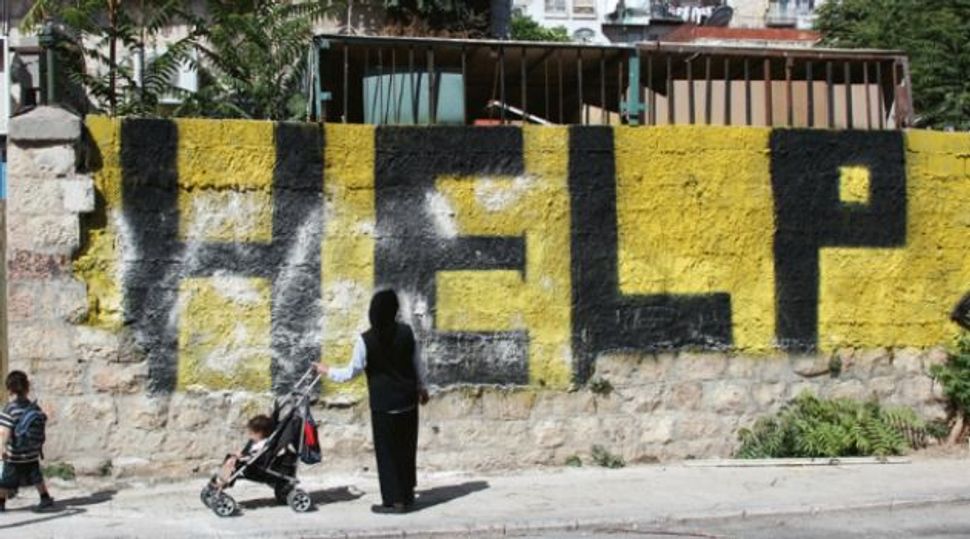 Jerusalem in early September is a restless place. The streets still emanate waves of trapped desert heat into the air. It’s the brief lull between Ramadan and Rosh Hashanah, but the Old City is alive with the sounds of chanting, clanging bells and calls to prayer.

I am just outside of the Damascus Gate, which opens into the Muslim Quarter of the city, about to enter into Musrara, a neighborhood that lies on the seam of East and West Jerusalem. My tour guide, Matan Israeli, is a scruffy 30-something Jerusalemite wearing a pair of sunglasses that look like old-fashioned aviator goggles and an oversized T-shirt. Israeli is the leader of a not-for-profit arts organization based in the neighborhood called “Muslala,” a combination of the neighborhood’s name and “k’lala,” the Hebrew word for “curse.” The name is reflective of the complications of the neighborhood, a place often caught in the middle of violent conflicts.

Israeli stops in front of a winding alleyway flanked with stone houses riddled with bullet holes from the years of conflict the neighborhood has seen. Above the wall of the Old City, just across from us, the Dome of the Rock glints in the sunlight. The alley bears a tiled sign typical of the streets of the Old City, with the name of the street in Arabic, Hebrew and English. “This,” he explains with a triumphant flourish, “is Black Panthers Way.”

Forty years after their founding, the Israeli Black Panthers have become folk heroes for artists like Israeli; they are icons of social justice in a country increasingly polarized between left and right. The Panthers, inspired by Huey Newton and Bobby Seele’s fight for equality in America, struggled to make prejudices against Mizrahi Jews visible. They hoped for an overhaul of Israeli society. Today, they are remembered, with more warmth than are their American counterparts, as pioneers in the arena of social justice.

Black Panthers Way was one of several guerilla art projects that Israeli and Muslala installed in the neighborhood — subtle works that, like the street sign, look like any other municipal markers until you peer a bit more closely. Some spray-painted signs modeled to look like the common markers directing residents to bomb shelters have been replaced with the word “love.” Another sign announces “They’re Not Nice” Alley next to a picture of Golda Meir. That is how the prime minister described the Panthers after meeting with them in the early 1970s. Another plaque, on top of a reclaimed community center, simply has the imprint of an upraised fist, the symbol of the group.

Muslala has also sponsored neighborhood events to introduce the remaining members of the Panthers to newer residents of the neighborhood, including the ultra-Orthodox community that has grown to the west and the artists and foreigners who have been driving up home prices. Other artists have also made works commemorating the Panthers. At a gallery attached to the Musrara Institute of Art, artist Avi Sabag produced a series of animated films based on interviews with the active Panthers. In one installment, a Moroccan man named Moshe Amoyal spoke about being thrown into jail as a 9-year-old for stealing tiles. His time in the institution convinced him of the inherent prejudice against Mizrahi Jews like him, and led to his involvement with the Panthers. “Who could have touched a 9-year-old boy like that?” Amoyal asks in the film. “To ruin his life for a few tiles?”

Founded in 1971 in tribute to the American group of the same name, the Israeli Black Panthers had a brief period of relevance in Israeli politics. They fought for the ignored populations of Jerusalem: Mizrahi and Sephardic Jews. Many Panthers were sympathetic to the Palestinian cause, viewing Palestinians as a fellow oppressed minority of their home country. The Jerusalem that produced the group was a shaky one, still grappling with changing borders after 1967. Musrara was the cradle of the movement. Though it had originally been a wealthy Jewish neighborhood, the war of 1948 transformed it into an abandoned war zone. Desperately poor Mizrahi Jews from North Africa settled into the deserted houses, often living mere feet from the Jordanian border. With the unification of the city under Israeli rule, the government’s preferential treatment of Ashkenazi Jews became obvious to those in Musrara.

The Black Panthers formed as a militant answer to the problem of social inequality, staging demonstrations without police permission and distributing milk to the poor. In one clash with the police in Zion Square big enough to spur the famous meeting with Prime Minister Meir, 74 demonstrators were arrested and another 20 hospitalized. Koko Deri, the Panther leader who has been working with Muslala, remembers the time as one of great turmoil. “It used to be just like South Africa here,” he said. “Everything was organized to keep the whites in power. There was a lot of racism and hatred and inequality. We educated people about the inequality in this country and because of that we gave Mizrahim at the bottom of society a chance.“

But the Yom Kippur War in 1973 drew the state’s focus away from internal affairs, and the Panthers faded into a marginal group. Some members entered politics with little success. Starry-eyed activists have tried, unsuccessfully, to resurrect the Panthers in Israel several times since the 1970s. Many Israeli artists like Matan Israeli hope to prevent the Panthers from fading into a footnote in the history books. “It’s important for the Panthers to get credit for their work while they’re still alive,” Israeli said. “It’s an act of protest.”

This summer, Muslala joined with the Israeli Department of Culture to present a program titled “Between Green and Red,” a resurrection of the watermelon stands that the Panthers used as meeting places and open salons during the 1970s. The original stands, “basta” in Arabic, sold cups of wickedly strong Arabic coffee and slices of thirst-quenching melon to Mizrahi and Ashkenazi Jews and Arabs alike, and became impromptu neighborhood hangouts. Basta connected the separate factions of the Musrara neighborhood, and Israeli hoped that the magic could be recreated. The group brought in musicians for nightly concerts, and held Q-and-A sessions with Koko Deri and other Panther leaders.

The Panther awareness sessions produced a rare mix in modern Israel; they were places where ultra-Orthodox and secular Jews and Palestinians met. “We got criticism from both sides, Israeli recalls. “The extreme right said, ‘Hey you’re bringing Arabs to the neighborhood.’ And the left, they said, ‘We aren’t interested in your idea of normalization.

How can we sit with Israelis while they’re still occupying our land?’” Some questioned whether the Panthers, a fringe organization that had a reputation for violence in their heyday, should be celebrated in such a fashion. Several of Muslala’s related works — a billboard that featured a painting of a woman, a huge graffiti sign that read “Help!” — were defaced or painted over by enraged local residents. But the nights were enough of a hit that Musrara is considering making a permanent watermelon stand and event venue there. “It’s the first step,” Israeli said.

What do the actual Panthers think about Jerusalem artists using their story to promote social justice? Koko Deri, for his part, is happy to have young people involved in activism once more. “There are still a lot of problems, and technology has changed the culture completely,” Deri said. “Today people are passive. They prefer to sit at home on the Internet instead of going out to the street and change things. We need people to imitate our methods.”

But to Israeli, that’s not the point. Trying to resurrect the Panthers as an actual movement, he told me, is like “riding a dead donkey.” The hope is that Israelis will remember their own social history, and that change is possible from grassroots organizations like the Panthers. The way that the Panthers worked — using what they could, building with or without the permission of the state — is, to Israeli, what art should do: provoke and question the status quo. In a place like Jerusalem, it’s particularly important to keep the threads of history alive, to encourage artists to speak out about their values. The artistic community’s embrace of the Black Panthers is a way of preserving social history as well as political landmarks, a criticism of Israeli culture that manages to also celebrate it. “There’s amazing memory, here in Musrara,” Israeli said. “But it’s crucial to show that there’s another narrative in Israeli society. It makes people think. It’s the right thing at the right moment.”

Margaret Eby has contributed to The New York Times, the Los Angeles Times, Slate and Salon, among other publications. She lives in Brooklyn.