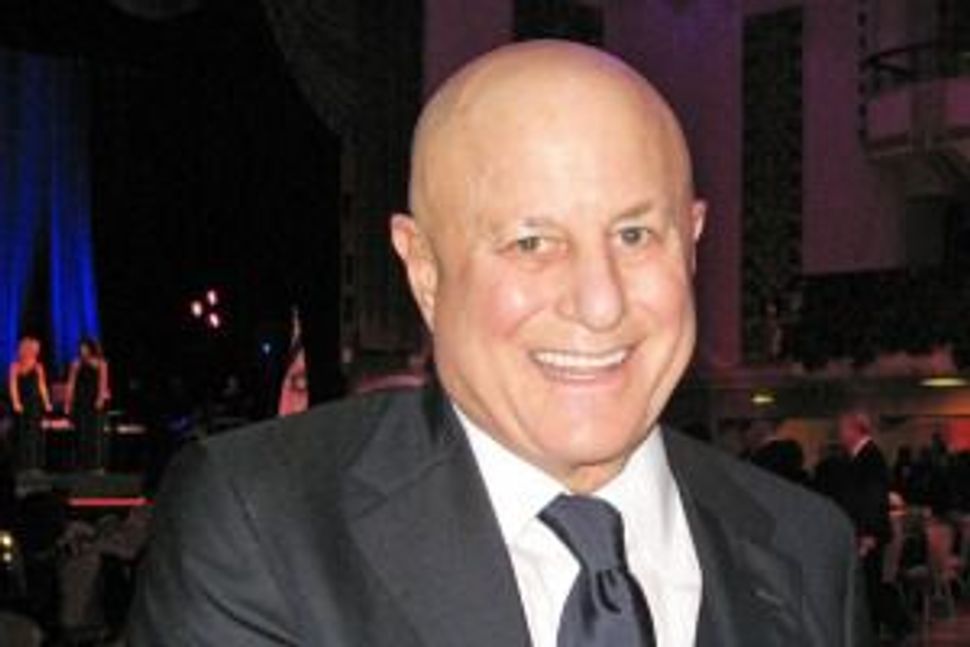 As harp and violin music played gently in the background, the buzz among the 500 black-tie guests at the Hebrew Home at Riverdale Foundation’s 95th anniversary dinner, which, held on November 11, raised $2.2 million, was about the devastation inflicted by Hurricane Sandy. Previously called the Hebrew Home for the Aged, the organization is a full-service geriatric care facility offering various programs. “Where were you and your family? Any damage?” people asked one another. From across dinner tables at the Waldorf-Astoria’s Grand Ballroom, guests described how they and their loved ones, neighbors and friends had been affected by this disaster. Jeffrey Maurer **, the Hebrew Home’s board chairman thanked event co-chairmen **Maurice Greenberg, chairman and CEO of C.V. Starr & Co., and Sanford Weill, chairman emeritus of Citigroup Inc., for their “time, resources and wisdom.” The Hebrew Home’s president and CEO, Daniel Reingold, described the organization’s work during the hurricane: “Our professionals helped hundreds of New Yorkers relocate through its 24-hour call center… took in critical patients through the night when NYU Hospital Langone’s generators went out…. Staff members knocked on doors of their 2,000 residents to make sure they were okay.” The event’s honoree was Ronald Perelman, chairman and CEO of MacAndrews & Forbes Holdings Inc.

“Fifty years ago we moved Hebrew Home from Harlem [where it was founded in 1917] to Riverdale, [to a] location overlooking the Hudson River on an 18-acre campus” Reingold said. “Boy! Did they have a vision! Who could have imagined they were smart enough to locate us 100 feet above the water line! Last year we were able to obtain an additional 14-acre parcel of land. The 32-acre campus, the largest waterfront campus in New York City, will be named the Maurice R. [“Hank”] and Corinne P. Greenberg Campus. It is particularly meaningful to make this announcement on Veterans Day, because Hank [Greenberg] is one of the veterans here tonight. He left home at 17, was [with] the U.S. Army Rangers and among the first wave to storm Omaha Beach on D-Day. Hank [helped] liberate Dachau and returned to service in Korea and received the Bronze Star.” Reingold introduced Greenberg as coming “from humble beginnings… [to] build [American International Group] into the largest insurance company in the world…. As Tom Brokaw wrote about him in [his book] ‘The Greatest Generation,’ ‘it’s next to impossible to get Hank to talk about what he went through… He is too busy moving along to his next objective.”

A chipper 87-year-old Greenberg bounded to the podium: “The Home means a great deal to my family. My mother…and currently my daughter-in-law’s mother are there.” Surveying the room, he said: “There are a number of veterans in the audience this evening, and many in harm’s way in countries around the world. I’d like to show support for them.” Several World War II and Korean War veterans residing at the Hebrew Home were recognized and applauded. Greenberg then introduced Perelman, “a great American, a great business leader, and a great philanthropist who has done so much for so many people! “ Stepping up to the microphone, Perelman said: “ Hebrew Home serves 1 million meals a year, gives over 50,000 physical therapy sessions to in-house and outside resident elderly in a very gentle, kosher, haimish [home like] kind of environment. So for all of us who have used your services, and some of us who are going to use your services, Dan [Reingold], I thank you very much.

“Four months ago Hank Greenberg called me up and said, ‘I’d like you to be honored this year at the Home. I told him, ‘I can’t do that!’ He asked ‘Why not?’ I told him, ‘I’ve got a 2-year old I’m about to get into nursery school, and just last month had my most recent baby. How is it going to look for me to be honored by an old-age home?’ Greenberg replied, ‘I really don’t care about those issues. You’re going to get your skinny little ass in that chair!’ So I replied, ‘Hank, I love you and I love the work you do for all of us around the world, not just in New York.” After accepting the award, Perelman joshed, “Now I’m going to get my skinny little ass over there,” and headed back to his table.

I saw Isaiah Sheffer, writer, actor and director, and founder of Symphony Space, in October, about a month before he died on November 9 of complications from a stroke. He was among the guests at the home of Nahma Sandrow author of “Vagabond Stars: A World History of Yiddish Theater” (Harper & Row, 1977), and her husband, photographer William Meyers; the couple hosted a reading of Samuel Beckett’s “Waiting for Godot” in Yiddish. Seeing Sheffer, I had a flashback to a dress rehearsal in 2007 at Symphony Space, when as he energetically directed Theodore Bikel and Fyvush Finkel in”Di Komediantn,” playwright Miriam Hoffman’s Yiddish translation of **Neil Simon’s “The Sunshine Boys.”

Over the years, I told Sheffer how grateful I was for — and how delighted I was by —his 1990 English staging of “Yiddle With a Fiddle” based on Joseph Green’s 1936 Yiddish film “Yidl Mitn Fidl” and the impact it had on my granddaughter Michelle Cohen. The film stars Molly Picon as a girl who poses as a boy and joins a band of wandering musicians performing in courtyards and streets of 1930s Poland. Sheffer’s production starred Emily Loesser in Picon’s role.

I took then-7-year-old Michelle to see the musical, which I had seen as a child at a movie theater in Warsaw, Poland. Sitting cross-legged on her seat, she was entranced so much so that she came back to see it again. Michelle later told me that for a show-and-tell session at her Great Neck, N.Y., elementary school, she chose to sing Picon’s signature song “Oh, Mama, Am I in Love!” (“Oy Mame, Bin Ikh Farlibt”), music by Abraham Ellstein (1907–1963) and English book and lyrics by Sheffer.