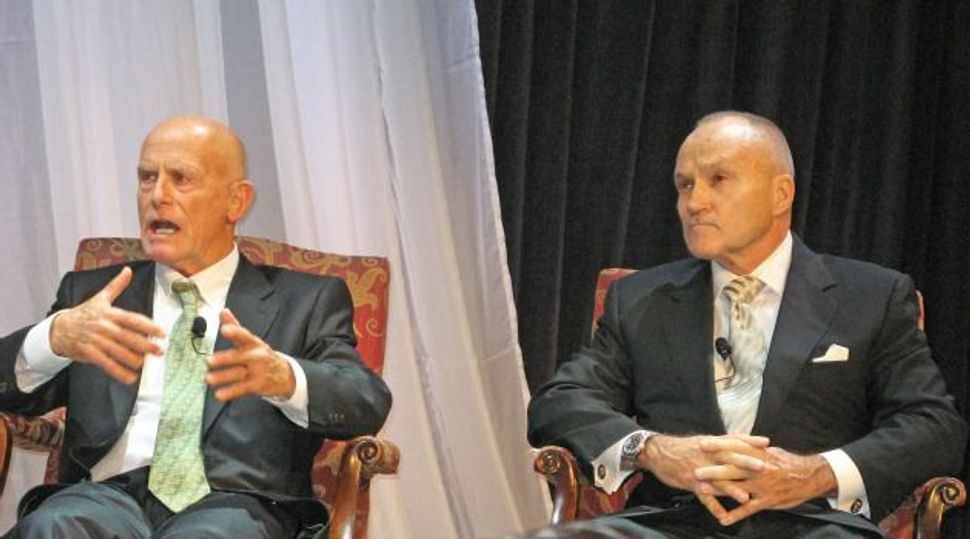 “We gather together tonight to pay tribute to the wonderful friendship between Israel and the United States and to support the Rabin Medical Center,” said TV interviewer Charlie Rose, master of ceremonies of the November 19 American Friends of Rabin Medical Center’s 13th annual gala. Addressing the 600-strong festive, chatty crowd at Cipriani 42nd Street, Rose said that the hospital, named for Yitzhak Rabin, cares for 1 million patients annually, including Israeli Jews, Arabs and even Palestinians from Gaza and the West Bank. Rose queried NYC Police Commissioner Raymond Kelly and former director of the Israel Security Agency, or Shin Bet, Ami Ayalon about security. “Has the face of terrorism changed in terms of tactics and challenge?” Rose asked. Kelly responded that we have a relationship with Israeli law enforcement, and implied that terrorism is not only an Israeli issue, but also a reality here in New York City. “We have a very close relationship with Israel,” Kelly said. “We have some officers embedded with the Israeli national police [with] a regular exchange of information…. We’ve had 15 [terrorist] plots here against New York City…. Thanks to a combination of good work by the Federal Government, the NYPD and sheer luck, all of them have been deterred.”

“In a way, we are fighting a new kind of war,” Ayalon said, “a war [where] success or victory is not achieved on the battlefield but in the eyes of spectators all over the world…. We military people find it very difficult to understand that no matter what we do on the ground or at sea, [victory] is achieved by the side that controls the narrative [and is able] to present to spectators that he is a good guy. Because for the eyes of the spectators, no matter what was the moment — be it a picture of tank facing a child — the tank will lose the battle no matter what happened one moment earlier or what will happen a moment later.” At the end of the conversation, Rose thanked both men, adding, “It is because of these two men great men that we will live in a safer and more stable world.”

A spirited appeal for equipment conducted by Sotheby’s senior vice president, Jennifer Roth, resulted in the sale of 60 pieces of medical equipment for the Rabin Medical Center. Sale items included emergency beds at $10,000 apiece, defibrillators and oxygen masks. A special treat was a stunning performance by Antonio Douthit and Alicia Graf Mack, artists with the Alvin Ailey American Dance Theater. They electrified the crowd with a jazzy “Pas de Duke,” which celebrated Duke Ellington’s musical genius.

Abraham “Barry” Cohen, who delivered the evening’s welcome address, died November 22nd. He was chairman of AFRMC for 13 years and presided over the organization’s 13 galas. According to AFRMC’s executive director, Joshua Plaut, ‘This year’s was the most successful of all, a fitting tribute to our gala honoree this year, Ron Cohen (no relation to Barry), but to Barry’s will power and determination. He willed himself to live through this gala.”

“The Golden Land,” an English-Yiddish Musical — Not for Bubbes Only

In the lobby of Baruch Performing Arts Center, Bryna Wasserman, director of the National Yiddish Theatre-Folksbiene’s production of “The Golden Land,” greeted the November 24 crowd of theater arrivals, including my youngest granddaughter, 15-year-old Alexandra Olney. In a corner of the lobby, Folksbiene’s associate artistic director, Motl Didner, was conducting a Yiddish class for the arrivals.

I first saw “The Golden Land” in 1982. A musical in English and Yiddish, created by Zalmen Mlotek and Moishe Rosenfeld, it was originally commissioned for the Workmen’s Circle/Arbeter Ring National Convention, in honor of the Jewish Daily Forward on its 85th anniversary. The event was held at the Stevensville Hotel in the Catskills. Over the years, I wondered if my grandchildren would ever get to see this gem of a Jewish-Yiddish-American musical. As they say in Yiddish, az men lebt derlebt men (if one lives long enough…).

A smooth, haimish production, it celebrates Jewish religious life and its secular AmericaN journey. In two hours of song, story and drama it offers a semester full of history that brings text to life. An energetic, talented cast — Bob Adler, Cooper Grodin, Stacey Harris, Andrew Keltz, Daniella Rabbani and Sandy Rosenberg — makes it seem as though there were hundreds on the imaginatively designed set by Roger Hanna. I raise my thimble to Natasha Landau, whose costume designs, from turn-of-the century immigrant rags and shirtwaists to post-World War II fashions, are right on the button.

Music for Medicine supports the Open Medical Institute, founded by The American Austrian Foundation and by physicians from the Weill Cornell Medical College and New York-Presbyterian Hospital. The institute funds medical seminars between American and European teaching physicians and physicians from developing nations worldwide. The evening concluded with a festive dinner at Carnegie Hall’s Rohatyn Room.