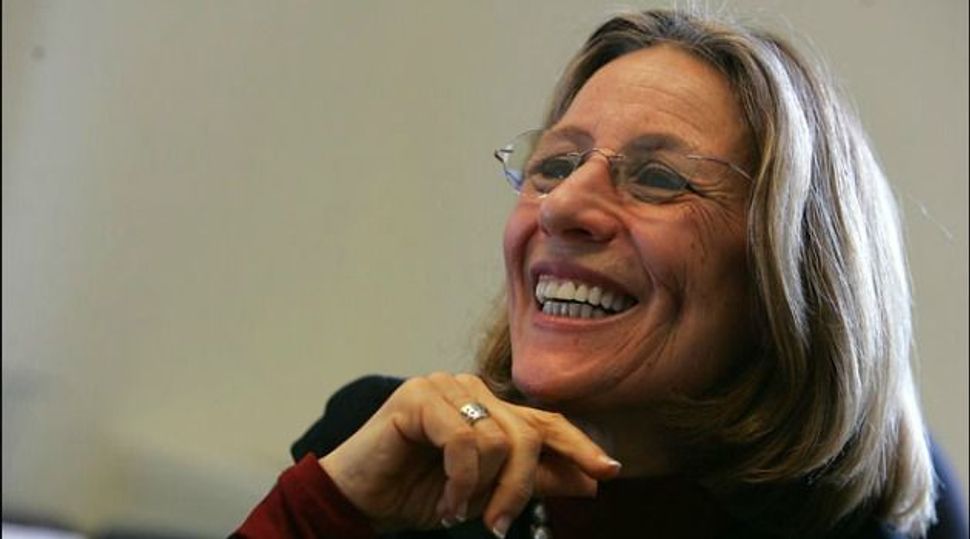 Soft Touch: Geri Palast, the head of the Israel Action Network, says a nuanced approach is needed to counter liberal criticism of the Jewish State. Image by courtesy of ian

Anti-Israel groups were elated this past March when the City of Seattle’s Lesbian Gay Bisexual Transgender Commission abruptly canceled a forum featuring six Israeli LGBT activists on an Israeli government supported tour sponsored by a gay and lesbian Jewish group promoting ties with their Israeli counterparts.

The Israel critics, who had protested the appearance as an exercise in “pink washing,” claimed success in frustrating what they described as Israel’s effort to use gay and lesbian rights to divert accusations that Israel violated Palestinian human rights in the Israeli-occupied West Bank.

But upon hearing of the cancellation, the Israel Action Network, a group set up by Jewish federations, sprang into action in a manner that broke with the pro-Israel activist tradition. Not only did the group demand — and receive — an apology from the LGBT commission, it also used the crisis to establish a dialogue with the commissioners. During these discussions, IAN stressed the parallel struggles of the Jewish community and the LGBT community for equality and civil rights, and noted the similarities between the two communities’ experiences of discrimination.

“We didn’t want to just take the apology and go home,” said Zach Carstensen, director of public affairs and government relations at the Seattle Jewish federation. “What we’ve learned is that every case in which people try to challenge the legitimacy of Israel is an opportunity to engage.”

It is an advocacy strategy separate and distinct from that promoted by those who simply seek to shift discussion about Israel to other, apolitical issues, such as its innovative high-tech industry; cutting-edge science research; and glittering cultural output in music, film and other fields. That approach is aimed more towards those in the center who may not yet have clear political views on the Middle East. But IAN, a joint project of the Jewish Federations of North America and the Jewish Council for Public Affairs, seeks to engage critics — especially liberals — who may be sympathetic to the Palestinians, by addressing their concerns in a broader context.

The Seattle event is among the success stories highlighted in a recently issued IAN handbook recommending tactics and strategies for countering what it considers delegitimization of the Jewish state. Founded two years ago, by the Jewish Federations of North America, which allocated initial funding of $6 million for the initiative’s first three years, IAN seeks to provide the community with the “best practices” for combating anti-Israel incidents.

IAN has adopted a broad definition of de-legitimization, one that encompasses everything from heckling the Israeli ambassador during a university speech to boycott and divestment motions in church-governing bodies and anti-Israel resolutions at the United Nations. Still, the group is counseling a practical, pro-engagement strategy for countering those actions it perceives as delegitimizing.

“Our first point is that you need a nuanced approach. The reflexive reaction that everything [attacking Israel] needs to be boycotted is not always appropriate,” said Geri Palast, IAN’s managing director. “What we are counseling our communities is that you have to match your strategy and your tools to what the real threat is.”

The focus on engagement and on reaching out to liberal and left-wing groups fits well with Palast’s background. Palast came to the project not from the world of pro-Israel advocacy, but from liberal and labor circles. She was the top political director for the Service Employees International Union and later served as assistant secretary of labor in the Clinton administration. IAN defines its purpose as seeking to defuse situations rather than to increase tensions.

A Boycott Divestment and Sanctions conference, which took place last February at the University of Pennsylvania, demonstrated this approach. In that case, rather than confronting, protesting or seeking to shut down the conference, pro-Israel advocates put on a program of their own, promoting non-BDS approaches for resolving the conflict between the two sides.

“The community promoted a counter-message that educated a much broader audience about Israel,” IAN’s booklet recounted.

Palast takes a similar low-key approach toward Israeli Apartheid Week, the annual program of events that anti-occupation activists hold on campuses across the country. The events have “fizzled out,” she told the Forward, and therefore the Jewish community should not “waste time on them.”

The ongoing battle at the University of California, Irvine, which in November attempted to pass a resolution divesting from Israel, demonstrated the difficulty in dealing with anti-Israel actions even when the Jewish community does attempt to engage, as advised by IAN. “It’s about building the relationships in advance,” said Palast, who noted that the resolution caught supporters of Israel by surprise. “It shows that work on the campus level needs to be redoubled.”

But engaging with groups on the ground instead of fighting them, cannot be the sum total of the Jewish community’s struggle on college campuses, activist Ken Marcus told the Forward.

Marcus is president of the Louis D. Brandeis Center for Human Rights Under Law, a more aggressive program that seeks to apply Title VI of the Civil Rights Act to cases in which Jewish students believe that anti-Israel events on campus cross over into anti-Semitism. Marcus’s group seeks to get the U.S. Education Department to investigate the events in question and, where necessary, to sanction the schools at which they occur. “When there is anti-Semitism on campus, you need to address it in a different way,” he said.

Despite taking a more moderate approach, IAN has worked in tandem with a wide array of Jewish organizations, from J Street on the left to the Zionist Organization of America on the right. Palast described a “big tent” approach that, she said, welcomed any group so long as it supported a sovereign Jewish state and a two-state solution to the Israeli-Palestinian conflict.

In fact, IAN’s tent may stretch a little farther right than that: The ZOA, which has worked with IAN on several campaigns, does not support a two-state solution.

As an example of the big tent approach, Palast pointed to the New York Jewish community’s fight last March against a campaign to get a popular food co-op in Brooklyn’s Park Slope neighborhood to boycott Israeli products.

The anti-boycott effort brought together Orthodox rabbis, Jewish organizations and liberal Jewish activists to defeat the measure. IAN provided advice and material support to the local groups in their fight. “We want local groups to take the lead,” Palast said. “Our role is supportive.”

While demonstrating success in getting Jewish groups with sharp political differences to work together, IAN’s bigger challenge is to engage groups outside the community. Many of these, like the Seattle LGBT commission trend to the liberal side and are more open to a pro-Palestinian approach based on human rights arguments.

Carstensen, in his summary of the Seattle affair, argued that pro-Israel advocates can counter this approach by using its existing ties with such groups, such as those already in place in the Seattle case through widespread Jewish cooperation with LGBT community on gay rights issues.

IAN believes that sustained work over many years, done by IAN, the Jewish Council on Public Affairs and Jewish federations, to engage with activists within the Presbyterian Church (USA) was also key to gaining just enough votes in that body to defeat a divestment resolution last year. Instead, the Presbyterians adopted a call for investing in peaceful initiatives in the region.

Advocates of an Israel boycott argue that the tactics offered by IAN do little to change the situation on the ground. Rebecca Vilkomerson, executive director of Jewish Voice for Peace, a pro-BDS organization, pointed to the divestment resolution passed in November by the legislative arm of UC Irvine’s student government as proof that the BDS campaign is far from over. If anything, she said, IAN’s willingness to engage with communal organizations and discuss their support for BDS, shows that “they are ceding a certain territory.”

Students for Justice in Palestine, the group behind much of the anti-Israel activity on university campuses, also maintained that a softer approach to pro-Israel advocacy will not win over students. “These types of tactics are effective for those that have already made up their mind on what they believe and do not wish to become educated by facts,” Shifa Alkhatib, the group’s spokeswoman, wrote in an email.