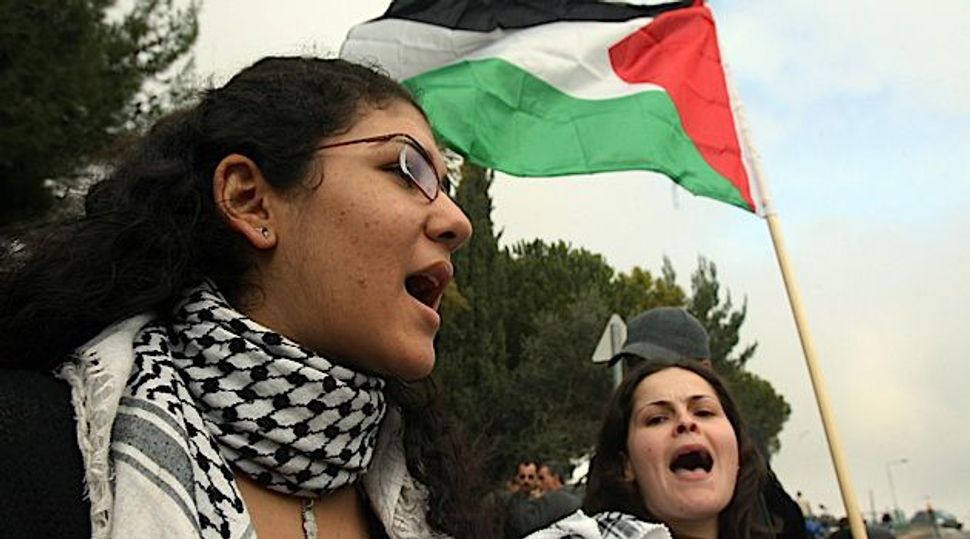 Separate from the Crowd: Arab Israeli students studying in Jordan face ridicule from other Arab students. Image by Getty Images

At first, the young man’s story sounds familiar: Tall, green-eyed, he walks the corridors of his university and his peers often shout at him, “Jew, go back to where you came from!” But we are not in Eastern Europe in 1881, and the student, Mohand, is not Jewish — he is an Arab Israeli studying in Jordan. His story is not exceptional. Although most, if not all, Arab Israelis in the country face some sort of hostility because of their nationality, the reaction of students like Mohand is unexpected: “Coming to Jordan” he told me, “not only did I not embrace the anti-Israeli attitude people freely express here, but being here actually strengthens my pride of being Israeli.” Yet the reality Mohand reveals is more complex than this one sentence might convey.

This past summer, on my break from undergraduate studies, I had a unique experience for a recently discharged Israeli soldier: I lived in Amman with an Arab Israeli and spent much of my time with Arab Israelis studying there. Last year, when I decided to learn Arabic in an Arab country, a close friend introduced me to his cousin who studies in Jordan — the connection between us was immediate and we became good friends.

While living in Jordan, according to my new friend’s advice, I hid my Israeli identity from most people, including some of those mentioned in this essay. It enabled me to be part of their group and to see their life in Jordan through their eyes. Out of respect for them and due to social stigma, I am using the full names only of those who gave me permission to do so.

In recent years, Jordan has become a magnet for Arab Israelis who want to study abroad. This past decade, their number has quadrupled to more than 6,000. The studens I spoke with testify that being in Jordan has helped shape their identity — strengthening its Israeli component. Here they acquire a new and more complex perspective on life in the Arab world. Whether at the university or on the street, they often face hostility that isolates them. Comparing their lives in Israel with their lives in Jordan, they suddenly feel more connected to the land lying west of the Jordan River than they did before.

“The first difficulty we come across,” said Saleh Ghanem, a round-faced and kind-looking student from a village near Akko, “is when presenting ourselves. One must not say ‘Israel’ here,” he explained. When asked, he answered that he is a “48er,” a neutral term meaning that his family was in Israeli territory since its beginning and that his family members are citizens.

“Once, while riding in a cab,” he continued, “I mentioned Tel Aviv by mistake. The driver, who overheard me, started screaming, telling me never to say Tel Aviv, only Yaffo.” But even when presenting themselves as 48ers they do not feel accepted, and it is difficult for them to blend in with the Jordanians of Palestinian descent, who make up the majority of Amman’s population.

As a response, they create their own exclusive culture. They live, party, eat and study almost entirely with other Arab Israelis; very few of them mingle with students from other Arab countries. In Ghanem’s building, for instance, almost all the apartments are occupied by students from Sakhnin, Haifa or Nazareth.

Ghanem dreamed of playing soccer professionally; he would have loved to play for the university here — but cannot. “If I had to be twice as good as the Jewish players to play in Hapoel Akko in Israel, I’ll need to be 20 times as good to play here,” he said, adding, “Even then they won’t let me play.”

Mohand tried to explain the cultural barrier between Israelis and Arabs: “On many levels we are much alike; at the same, time their way of thinking is almost foreign to us.” When asked to articulate this difference, however, he struggled with his words, admitting, “I do not have Jordanian friends. They are not as free as we are.”

“Freedom” is a leitmotif in conversations with Arab Israelis here; many of them mention it as the reason for preferring Israel to Jordan. Although relatively modern, life in the Jordanian monarchy requires one to be careful; one can get arrested for using the king’s name in an offensive way. Coming from a country in which it is more common to criticize the government than to talk about the weather, they feel oppressed. But these Arab Israelis outsmart the system: They use Hebrew words that no one else understands, or code names; the king, for instance, they call “Tamer,” a common name for a male. Why Tamer? If there was ever a reason it was long forgotten.

The vast majority of Arab Israelis are not excited about studying in Jordan and would rather stay in Israel for their degree. Some of them are so homesick that they count the days to the end of the semester so they can go back home. But they face a significant obstacle: passing the Psychometric Entrance Test, the Israeli SAT. The test, some argue, is culturally tilted towards native Hebrew speakers, which makes it harder for Arab students to do well.

Another obstacle is age. For some majors, one must be older then 20 because the universities claim that these topics require maturity. Others claim that this is a way to discriminate against Arab students, who unlike the rest of the population — busy with army service — begin their studies at 18. Whether the reason is political or not, the result is that many Arab Israelis are drawn away from Israeli academia.

Universities in Jordan are appreciated in the Arab and Muslim world and draw students from Bahrain to Pakistan. For Yusuf, a Christian dentistry student from Nazareth, meeting people from all over the Arab world is the most interesting part of living here. “Did that strengthen your sense of belonging to the larger Arab world?” I asked him. “No,” he answered firmly. “If anything, it shows me how distant we are.”

Although born and raised in Saudi Arabia, Mosa presents himself as a Palestinian from Hebron. He has met 48ers, but none is his close friend. “They are snobs and different from us,” he said, “some of them drink alcohol. I was once invited to their party, but I did not go. They say that they feel hated here, but we do, too. It is just hard to be a foreigner here. They are too preoccupied with their identity and become super defensive for no reason at all.”

The rejection and isolation that 48ers feel, and their comparison of Jordan with Israel, leads them to feel more Israeli, but it also helps them shape their unique Arab-Israeli identity. In Israel they all come from different places, south and north. Some are Christian, some are Muslim. These differences, important in Israel, are much less significant here: They have an opportunity to make region- and religion-crossing friendships.

On an afternoon this past August at the King Hussein border between Jordan and Israel I look around. It is almost Ramadan fast-breaking time and it is quiet, nearly deserted. In less than a week, the waiting hall at the border crossing will fill with thousands of students rushing back home. This journey will be accompanied by mixed feelings: gladness for being back in Israel, combined with slight bitterness thinking of the fall semester that will arrive too soon. But why worry now? Yusuf’s brother came to pick up the gang, and they are joyfully loading the large BMW SUV and sailing toward a pleasant summer in Nazareth.

Natan Odenheimer is a sophomore at Brandeis University, a freelance writer and U.S. correspondent for the Israeli magazine Educational Echos.