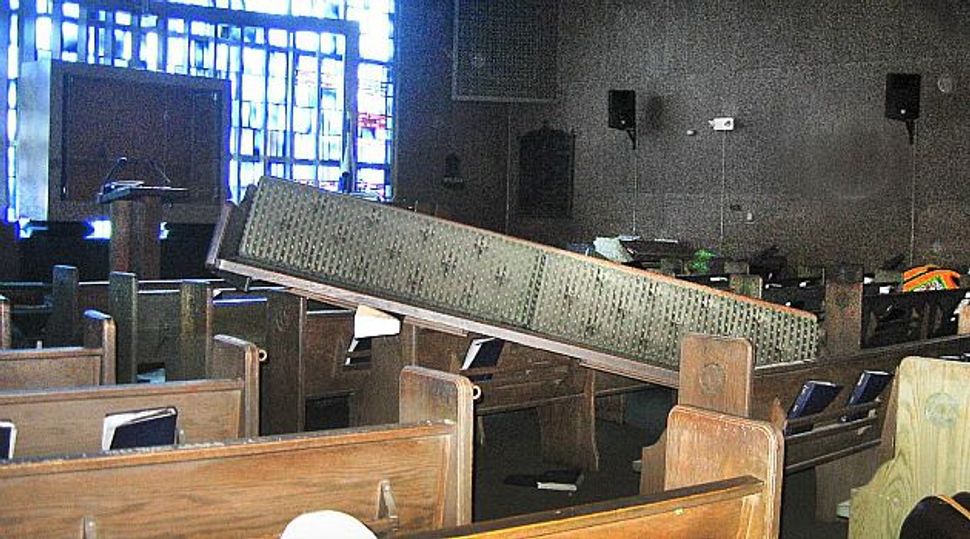 Synagogues Slammed: The West End Temple in the Rockaways is one of scores of synagogues damaged by the historic storm. Image by courtesy of west end temple

At least 63 synagogues in the New York area suffered damage from Hurricane Sandy, along with several in New Jersey, a Forward investigation reveals.

UJA-Federation, which is compiling data on Hurricane Sandy’s impact on Jewish institutions, reports that so far, it has heard from 64 synagogues in New York City, Long Island and Westchester County that have incurred damage. Four of those shuls told the Forward that they had not suffered any damage. But three additional synagogues not on the list did suffer damage in the October superstorm, officials at those synagogues said.

In New Jersey, where the eye of the storm made landfall, six synagogues suffered some damage.

UJA-Federation spokeswoman Roberta Lee was unable to offer any monetary estimate of total damages or breakdowns on damages to individual synagogues, but she said the severity ranged from minor flooding to millions of dollars in repairs. She stressed that the federation’s damage survey remained ongoing and would change over time.

One Jewish communal official involved in the aid effort noted that the areas damaged most heavily in the hurricane, such as the Rockaways and Brooklyn’s Sea Gate, were homes to “marginal” Jewish populations.

“To a great extent, a lot of the Jewish poor lived in these communities,” said the official, who would speak only if assured of anonymity because he was not authorized as a spokesman on this issue. The synagogues were old, as were many of their members, he said. And many of the old synagogues and homes were not insured against natural disaster.

Chabad of the Five Towns, in the Long Island town of Cedarhurst, reported minor roof problems, while Shula Winner, co-director of Chabad Synagogue of Manhattan Beach, in Brooklyn, said that her building had flooding reaching about 5-feet high. She estimated damage at about $100,000.

Rabbi Marjorie Slome of West End Temple, which is located in the Queens neighborhood of Neponsit in the Rockaways, estimated more than $1 million in damages to her synagogue. She said that with help from the Jewish Community Relations Council of New York she would apply to FEMA for aid.

In New Jersey, where there are 18 Jewish federations, damage to area synagogues was substantially less than in New York.

In Ocean County, which includes a number of synagogues in coastal communities, only one synagogue reported to the local federation about suffering physical damage.

New Jersey’s Jewish Federation of Greater MetroWest, which covers northern and central areas of the state, reported that only three of its 74 synagogues suffered physical damage. Shelley Labiner, MetroWest’s chief marketing officer, said she was not aware of any synagogues requesting help in applying for FEMA aid. Other federations reported no damage aside from power losses, or hadn’t kept extensive lists of the status of the synagogues in their area.

Rabbi Robert Scheinberg of the United Synagogue of Hoboken estimated $50,000 worth of damage to his congregation’s basement, which took in seven feet of water.

Rabbi Benjamin Adler of White Meadow Temple, in Rockaway, N.J., said his congregation lost part of its roof. He gave a “ballpark estimate” of total damage at $20,000. Adler said he was waiting to hear back on what his insurance would cover.

Rabbi David Bauman of Temple Israel of Long Beach, in Long Island’s Nassau County, estimated $5 million worth of damages, cleanup and reconstruction for his congregation’s building. Bauman said his synagogue was insured, but he noted, “Insurance companies have outs for everything.”