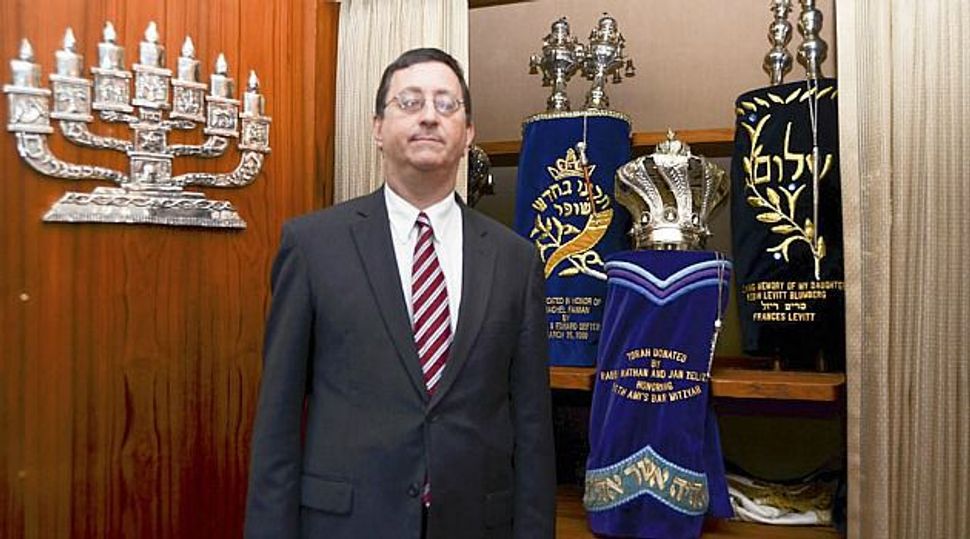 iRabbi: Eli Kavon isn?t ashamed of his online ordination. His congregants say he delivers as good a sermon as any seminoary graduate. Image by john sessa

Ordained in two years via a correspondence course by a virtually unknown rabbinical seminary in Long Island, he’s not a member of any mainstream rabbinical association. Nor is Kavon eligible for membership on the local board of rabbis.

His congregation, a Conservative synagogue in Boca Raton, Fla., couldn’t care less. “I’ve heard lots of [sermons] in my lifetime,” said Irving Pomerantz, a member of the board of directors at Beth Ami Congregation. “He gives the best.” 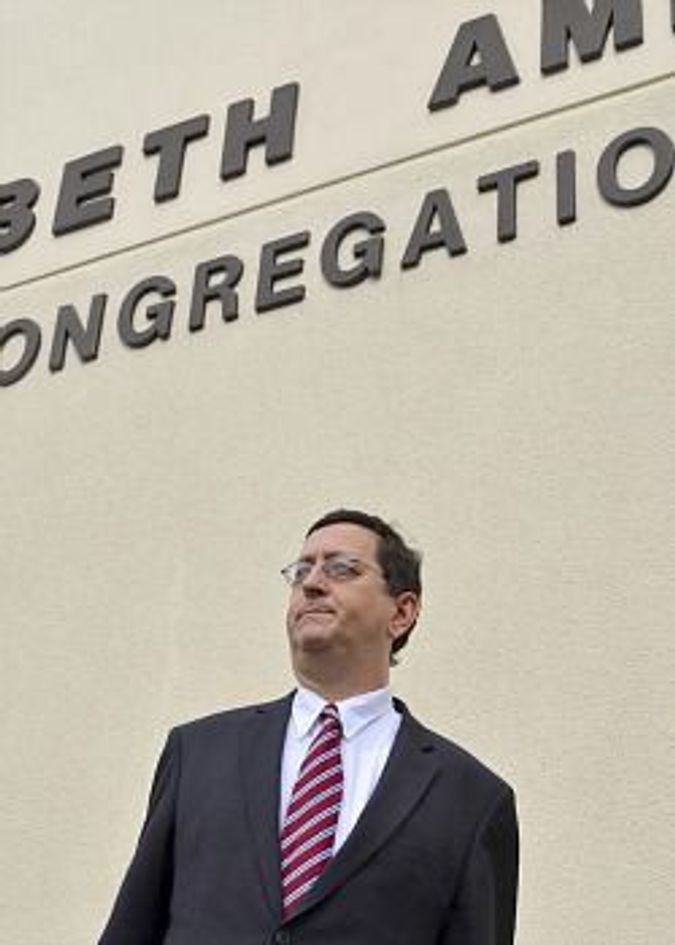 A year ago, Beth Ami hired Kavon to replace a rabbi who had been ordained by the Jewish Theological Seminary, the 125-year-old flagship institution of Conservative Judaism and the gold standard of Conservative Jewish rabbinic preparation.

Kavon is one of two graduates of the little-known Long Island correspondence program to be hired in South Florida this year to replace a JTS grad at the pulpit. The dean of JTS’s rabbinical school had never heard of the place Kavon attended until he was asked about it by the Forward.

Rabbis with questionable qualifications are nothing new in South Florida, where some local rabbis have been ordaining rabbinical candidates on their own for years. The recent hiring of the two nontraditional rabbis to Conservative pulpits, however, may point to a growing acceptance of their less-recognized credentials in this financially beleaguered Jewish community.

Conservative and Reform rabbis see the rise of these nontraditional rabbis as a dire threat. “It’s a plague down here,” said Rabbi Gerry Weiss, the JTS graduate who lost his job at Beth Ami to Kavon.

Others argue, however, that the shift answers an economic need, and one that isn’t going away.

“This is nothing more than a natural consequence of congregations trying to economize,” said Barak Richman, a professor at the Duke University School of Law. “The Conservative movement has really got to recognize that there are very, very powerful economizing forces, forces where synagogues and dues-paying members are really questioning the value they are getting for the dollars they are putting into the system.”

At his office at Temple Shaarei Shalom, the Reform synagogue he leads in Boynton Beach, Fla., Rabbi Anthony Fratello has a wall full of diplomas. There’s one from his undergraduate college; one from his master’s program at Hebrew Union College-Jewish Institute of Religion, the leading educational institution of Reform Judaism, and one from his ordination program at the same school.

“Why did I spend nine years of my life being trained and educated for this sacred profession when somebody could fulfill the requirements that I have for some of my b’nai mitzvah students and get the same thing in return?” Fratello asked.

Ordination at the JTS’s program for Conservative rabbis and at the HUC-JIR’s program for Reform rabbis takes five years and costs more than $100,000, though many students receive financial aid. Ordination at the Modern Orthodox Rabbi Isaac Elchanan Theological Seminary at Yeshiva University takes four years and is free for rabbinical students, though they are expected to enter with significant experience in Talmud study.

Rabbinical students take classes in Jewish law, pastoral care and other subjects. They also work at synagogues under the guidance of mentors.

Over the past century, JTS, HUC-JIR and RIETS have vetted and certified the vast majority of American-trained congregational rabbis. They were originally founded, in part, to handle the problem of questionable rabbinic credentials, which were a common phenomenon in the 19th century, according to Jonathan Sarna, a Brandeis University professor of American Jewish history. “The idea was, if you went to one of these three we could rely upon you; you would be bona fide,” Sarna said.

“The rabbinate is a serious profession,” said Rabbi Daniel Nevins, dean of the rabbinical school at JTS. “We’ve come a long way from the days when rabbis just took a Talmud exam and were basically considered to be ready.”

Some institutions now offering accelerated ordinations don’t even require a Talmud exam. At the Jewish Spiritual Leaders Institute, a 2-year-old online seminary, Rabbi Steven Blane will make you a rabbi after a year of once-weekly two-hour online classes and completion of “a 2,000-word research paper in a Jewish area of their choice,” according to the group’s website. Tuition is $8,000. Blane estimated that between the classes and other required sessions, ordination requires about 180 hours of class time. He said he has ordained 35 rabbis so far.

Blane received his own ordination from Rabbinical Seminary International, another highly abbreviated rabbinic program. That seminary is now run by Rabbi Roger Ross, who is also an RSI graduate. Ross described his school’s program as “self-guided.” Most candidates, he said, complete the $5,000 course in two years. Roughly 170 rabbis have received ordinations from the seminary since 1991, Ross said.

(In June, the JTA reported that a man calling himself a graduate of RSI announced that he would resign from the rabbinate after being accused of stealing a wheelchair at a nursing home.)

Blane admits that his program isn’t producing rabbis with the deep knowledge of Jewish law traditionally associated with the rabbinate. “My rabbis and their communities are frankly not interested in the minutiae of Halacha,” Blane said. He also said that graduates of his program aren’t automatically prepared to take pulpit positions. “My rabbis don’t expect necessarily that after a year of study they can go out and take a pulpit that one of the mainstream ordained rabbis is serving in,” said Blane. “We’re frankly not competition.”

Graduates of places like Blane’s and Ross’s seminaries aren’t allowed to join the Rabbinical Assembly or the Central Conference of American Rabbis, the rabbinic organizations of the Conservative and Reform movements, respectively. That doesn’t keep them from performing weddings and funerals, and holding High Holy Day services. It doesn’t even keep them from starting their own synagogues, as a few have in South Florida.

Theoretically, however, it should keep them from taking pulpit jobs at congregations affiliated with the Conservative and Reform movements. The R.A. and the CCAR work to strictly control rabbinic placement within their respective movements, and congregations can face sanction if they attempt to subvert those structures.

This has not stopped the two Conservative affiliated congregations in South Florida from hiring Kavon and Rabbi Bert Kieffer, the second of the two rabbis now working for Florida congregations affiliated with the United Synagogue of Conservative Judaism, the Conservative movement’s synagogue umbrella group. Both men graduated from Mesifta Adath Wolkowisk, also called The Rabbinical Academy, yet another alternative, quick-route seminary. A representative of the school, based in Woodmere, N.Y., refused to answer questions about its program or requirements when contacted by the Forward.

“I don’t want anyone out there to be judgmental about the kind of program the Mesifta Adath Wolkowisk offers,” said Rabbi Charles Agin, who identified himself as a faculty member of the program.

Kavon, one of the program’s graduates, identified Agin as being in charge of the seminary. Kavon said it had taken him two years to complete the program and that he had worked online and in person with Agin, who he said spends the winter in Florida.

Kavon said that, before entering the program, he earned a master’s degree in Jewish studies from the Spertus Institute in Chicago, had worked as a bar mitzvah instructor for years and had filled in for rabbis of other synagogues as a prayer leader.

“I realized I had a lot of skills I wanted to use,” Kavon said. “So I said I should pursue [ordination]; that is a logical step for me to step up professionally.”

But Kavon said he was not in a position at that stage in his life to leave his home in Florida. “I had work to do here. I couldn’t just uproot,” he said. The Long Island program’s correspondence course offered him a workable arrangement.

Beth Ami, a small synagogue with 300 members, hired Kavon this past January. Pomerantz, the board member, said that his congregation doesn’t need a great Talmud scholar. “He may know Talmud, I don’t know. We don’t have Talmud questions,” Pomerantz said. “He teaches the [Torah portion] of the week every Monday, and he does a wonderful job.”

Pomerantz said that when Kavon reaches the third year of his current three-year contract, he will be paid the same salary as his JTS-ordained predecessor.

Kieffer declined to speak on the record for this story. His synagogue website does not say where he obtained his ordination. Kavon identified him a graduate of Wolkowisk, and Kieffer is listed on Wolkowisk’s website as a member of its faculty.

Rabbi Michael Simon, another Wolkowisk graduate, has been the spiritual leader of Temple Beth Kodesh in Boynton Beach since 2005. The congregation, which still describes itself as Conservative, disaffiliated from the USCJ in 2006, one year after Simon’s arrival.

Local HUC-JIR and JTS rabbis in South Florida have taken some steps against the nontraditional rabbis. The Palm Beach County Board of Rabbis requires rabbis who aren’t members of the mainstream rabbinic associations to face a vote of the full membership of the Board of Rabbis before being admitted into the group. That has financial implications. Local funeral homes rarely ask rabbis who aren’t members of the Board of Rabbis to perform funerals for unaffiliated families, a lucrative source of income for some rabbis.

Mainstream rabbis express serious concerns about the ability of nontraditional rabbis to fulfill rabbinic tasks. “The people that we’ve trained, I can verify that they’ve gone through five or six years of rigorous training,” said JTS’s Nevins. “Some congregations are not doing their due diligence to make sure they have properly trained clergy.”

Others argue, however, that by dismissing rabbis hired from outside its own movement, Conservative Judaism in particular is missing the point. “The natural response among physicians, among lawyers, among rabbis when they see these people who don’t have the same training and are charging less… [is to argue that] those consumers are being defrauded,” said Duke’s Richman. “The natural inclination from that is to try to tighten controls over the marketplaces… locking up the job market. Not only is that natural inclination really bad for consumers… it also means they’re kind of doubling down on a dated model.”

Sarna, the Brandeis historian, agrees that the market is changing. “What you’re really seeing is the breakdown of the denominational control over every aspect of the process,” he said. “The same caveat emptor applies now in the rabbinate in the same way it applies anywhere else.”