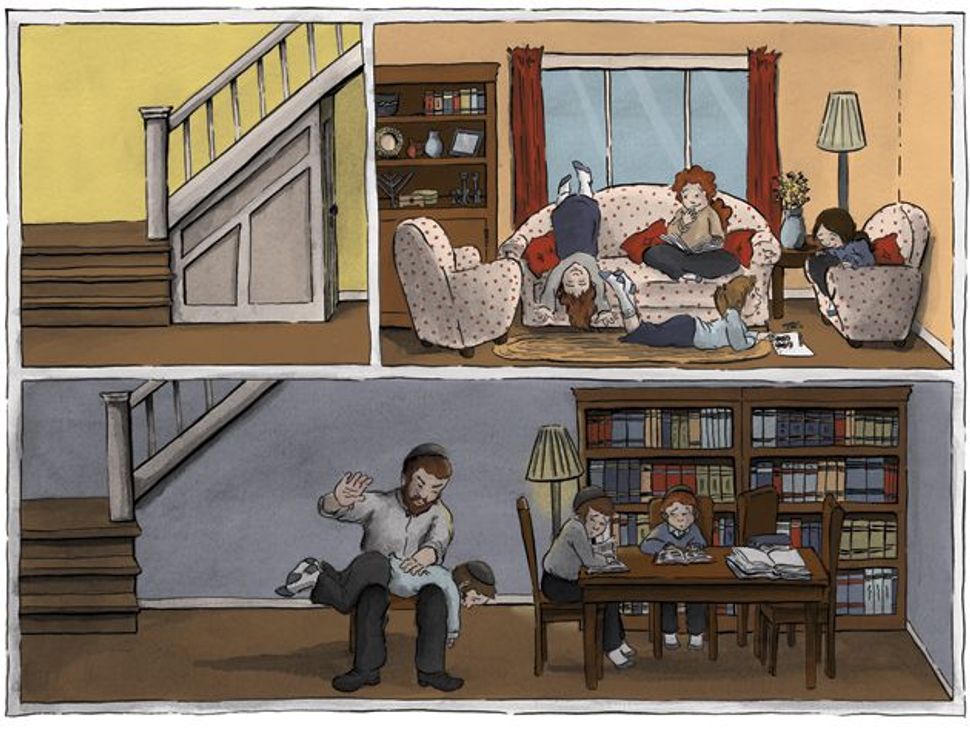 I always knew I was lucky to be a girl. This, despite being told that I was not. In the ultra-Orthodox world where I grew up, the boys are the exalted ones. Superiority belongs to the men, who learn the holy Torah.

Still. I always knew I was lucky to be a girl. We were never beaten up. We never felt the sting of the belt on our backs, or the ringing slap of the teacher’s hand. Girls never came home from school with purple welts. We never felt the stick coming down on our heads. We were treated gently; less was expected from us.

A girl is not meant to be a scholar. A girl cannot hope to learn Torah like a man. Only boys obey the holiest of God’s commandments and study the secrets of the Book.

It has been this way for generations: Men mold boys with sticks, searing the words of God into their minds. Of course, not every teacher hit, and not every boy felt the harsh slam of the rebbe’s palm. Only the bad ones did — those who misbehaved or didn’t study.

I knew I was lucky when, in the fourth grade, I came home with a report card marked NI, for Needs Improvement, in all six subjects. I explained to my father it meant “nisht di iker,” “not that important,” and my father laughed at my smarts. It wasn’t like I wouldn’t get married because of my grades. I would be a good wife and mother with or without the much-needed improvement. So would my friend Chana who had Attention Deficit Disorder. As long as her dress was modest, and her grades were good enough to pass, what did it really matter? She’d get a good husband just the same.

But not the boys. When my brother’s rebbe called home to complain, my father’s face turned pale with disappointment. And when Chana’s brother failed his mishnayis test for the third time, I could hear the sounds of his father’s hand from the basement.

Chana told me that her brother was beaten every week in school for being lazy, and then again at home for being beaten in school. Unlike, Chana, he couldn’t claim ADD as an excuse; there was no such thing as a boy who could not learn.

I knew I was lucky to be a girl, even as my 9-year-old cousin boasted and jabbed a finger at me, saying, “Boys are better then girls! Girls can’t learn the Torah. They don’t have any real mitzvahs. Because girls are dumb, and boys are smart — that’s how Hashem made it.”

I wanted to kick my stupid cousin. I wanted to clop him hard over his ear, the one bruised by his rebbe in cheder that day when he failed to remember the meaning of the words in the Torah. I told my cousin that he was dumber than any girl I knew. He even needed a tutor.

My cousin stuck out his tongue, and I laughed in his face, but I knew that he was right. It was plain that boys were superior to girls. It was there, in our morning prayers.

Every once in a while, a teacher tried to explain to us girls why the seemingly insulting blessing meant something different than what the seemingly insulting blessing actually said; why what our eyes saw was not what our minds should comprehend, and why our ears should not hear what our lips loudly read. Women are every bit as holy in God’s great eye, she said, because we enable the men to study the holy Torah.

But the entire matter was a puzzle to me. I would look down at the prayer book and attempt to differentiate between the reading, the seeing and the actual meaning, and in my mind, I’d secretly wonder, “Why would anyone ever want to be a boy?”

I liked being a girl. I liked that I was not beaten. I liked my life simpler and less rigid than that of my show-off cousin. I liked that I could miss a prayer and no one would look at me like I’d just murdered Cain.

And anyhow, the teacher told us that we too have a special mitzvah, one that boys do not have. We have modesty. A girl who is modest in dress and in behavior is equal in greatness to any Torah scholar.

It was during my brother’s bar mitzvah that I began having doubts. The preparations for his 13th birthday went on for weeks — there was a hall to choose, a musician to hire, floral centerpieces and cream-colored invitations. For months my brother studied with my father the sermon he would give in front of one hundred men; for days he practiced wrapping the strap of the tefillin, placing it correctly on his left arm. With the tefillin, boys become real men, fully initiated members of ultra-Orthodox society. With hats on their heads, they are counted as part of a minyan, the 10 men needed for prayers. And they study Torah like true scholars, from dawn until dusk, every day.

A boy’s bar mitzvah is a momentous occasion. His life the day before he turns 13 years old is completely different from his life the day after. A girl’s life, on the other hand, remains the same.

I told my father that it all seemed very unjust. I wanted a bar mitzvah too.

“It isn’t fair,” I said. “He has a bar mitzvah like a small wedding. He gets a new suit, an expensive watch and gifts piled high. And what will I get? A party at home with my friends? Twelve helium balloons? A girl’s bat mitzvah is like any other birthday. It’s stupid.” And I went to sleep in a huff.

I changed my mind the morning after my brother’s bar mitzvah. I heard the alarm clock from my brother’s room, and I thought it was morning. But it was barely dawn. I stumbled out of bed and watched in sleepy horror as my brother, fully garbed in hat and coat, took his tefillin and left for the early morning prayers.

The next day, the alarm clock rang at dawn again and did not stop. Through the thin wall, I heard my father shake my brother, reprimanding him, demanding that he wake up now. It was time for the morning prayers. And my brother, rubbing his eyes miserably, stumbled out of the house to yeshiva.

This was the part I had not realized on the night of my brother’s bar mitzvah. That he would have to wake up early every single day for the rest of his life.

So we watched our brothers, 13-year-old men, soldiers in the army of God: They were up at dawn and asleep by 10 p.m., the time in between filled with prayers and rigorous study. All secular education stopped in eighth grade. Sports and exercise were strictly forbidden. Those with private English tutors were mocked. One did not waste an hour and a half of the day on garbage like math or history; they mere distractions, trivial matters unbefitting a true Torah scholar.

So I knew I was lucky to be a girl. My bat mitzvah, a few months later, was simple. I had a slumber party at home with my friends, and 12 helium balloons. But the next morning, when I awoke, my life was the same as it had been the day before, and my father still thought of me as a child. I did not wear a hat like my brother, or have my name woven in gold on the tefillin’s velvet case, but I could still take dancing lessons at Shira’s. Unlike our brothers, we were allowed to inch slowly toward womanhood, one year at a time.

Some boys, like my brother, thrived. He became the man he was told he was, throwing himself passionately into holy study after the first hard week. Up at 5 a.m., he learned diligently all day as my parents beamed with pride. I remember wondering how he did it, if he was really happy this way, and I supposed that my 9-year-old cousin had been right after all. Boys were better then girls. God made them different somehow — harder and stronger, able to wake up before the sun.

But other boys, like my cousin, fell. He was one of hundreds who were beaten, marched, prodded and twisted into shapes they could not become. Those boys fell through the cracks and into the streets; boys like that could not survive.

For many, the culprit was ADD, or various other learning disabilities. Others were simply miserable, their bright minds trapped in tight spaces, their young brains crushed under the leaden pressure of the system. They were unable to adapt to the mass production, the tightly controlled machinery that hammers and pounds thousands of boys into identical men.

Those boys were considered defective — spat out and thrown like unwanted packages from yeshiva to yeshiva, belittled and degraded, belonging nowhere. What for many was a community of powerful belonging, to them was a prison; holy words were like chains on the heart and mind.

In the end, I knew I was lucky to be a girl because my cousin told me so. He said so years after the boastful 9-year-old boy had died. In his place stood a young man, haunted, with welts on his back and scars on his mind, sorting through the fragmented lies, finding a God who never meant for His words to be seared onto the skin of boys.

I was the lucky one for a while — inferior, weaker and happier for it. What I didn’t know was that it would end. Marriage began our hell, the day we stopped being girls. But that’s a story for another time. Because up until age 18, we had it better. We who did not wake up with the sun.

Judy Brown wrote the novel “Hush” under the pseudonym Eishes Chayil. “Inside Out” is her essay series about life in the ultra-Orthodox world. It is based on true events, but her characters’ names and identities have been changed; some are composites, comprising several real-life people. Find her at Facebook.com/JudyBrownHush.