The How’s and Why’s Behind the Survey 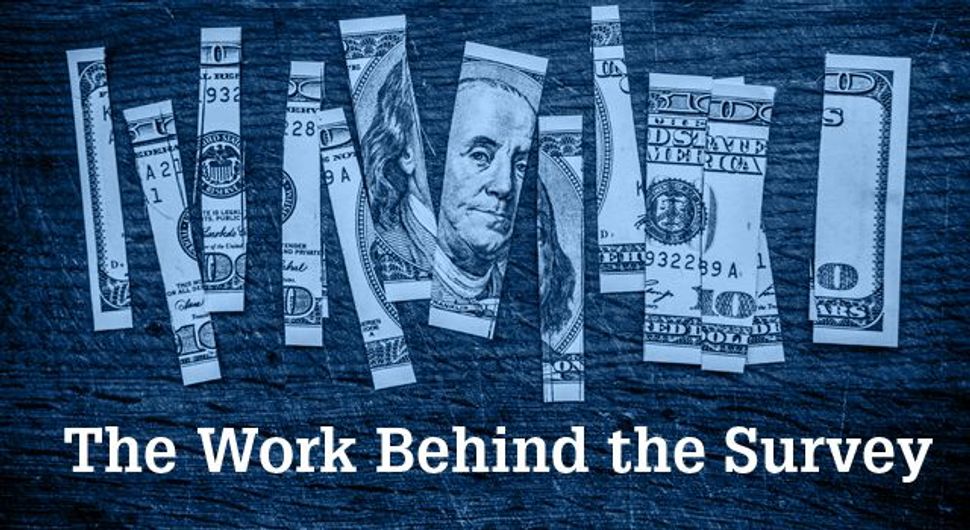 Image by via flickr/tax credits

The Forward’s fourth annual salary survey is a labor of love, sweat and deep journalistic conviction.

All the information published is, by law, available to the public, but ferreting it out and verifying it is a time-consuming, often confusing task. Not-for-profit organizations are supposed to file Form 990 with the Internal Revenue Service once a year, but the deadlines vary, and some organizations lag behind a year or two.

The information is available online at GuideStar, which collects the data that thousands of not-for-profits file with the IRS, and the Forward’s analysis of the information is done with GuideStar’s assistance, to ensure that it is correct and uniform from year to year and from organization to organization.

The Forward takes the extra step of trying to verify the data with each individual organization. Some are forthcoming, others are not, declining to respond to multiple calls and emails for what is, let’s remember, public information. This lack of transparency makes the task of holding these organizations accountable that much more difficult.

Over the four years that the Forward has published this work, we have tried to replenish the list of leaders and organizations to better represent the changing dynamics of communal leadership.

The 18 large federations in the United States are so designated by the federation system itself; the list of religious seminaries and educational institutions also reflects common understanding of denominational leadership.

But the composition of the advocacy and public service groups is more open to interpretation. In this survey, as in previous ones, we have focused on organizations that have a national scope, even though that means bypassing important regional efforts. At times a name will drop off the list — the American Jewish Congress after its official demise, for instance, or the Jewish Publication Society after it dramatically scaled back its operations.

We also include new groups that have risen in stature and impact, adding StandWithUs this year, and The Israel Project and Americans for Peace Now last year.

One area of persistent frustration is the attempt to gain information about religious organizations that are not required by law to reveal salaries and other details about their financial obligations. Last year, we asked each of those leaders to offer the information voluntarily; we did so again this year but no one gave us any details at all. Perhaps if congregants and supporters took up the call, the leaders would be more forthcoming.

Meanwhile, the survey of rabbinic compensation published this past summer by the Central Conference of American Rabbis sheds some light, at least within the Reform movement. Base compensation for senior or solo rabbis ranges on average from $92,384 for smaller congregations to $273,261 for synagogues with more than what the CCAR terms as 1,000 “units.”

The How’s and Why’s Behind the Survey