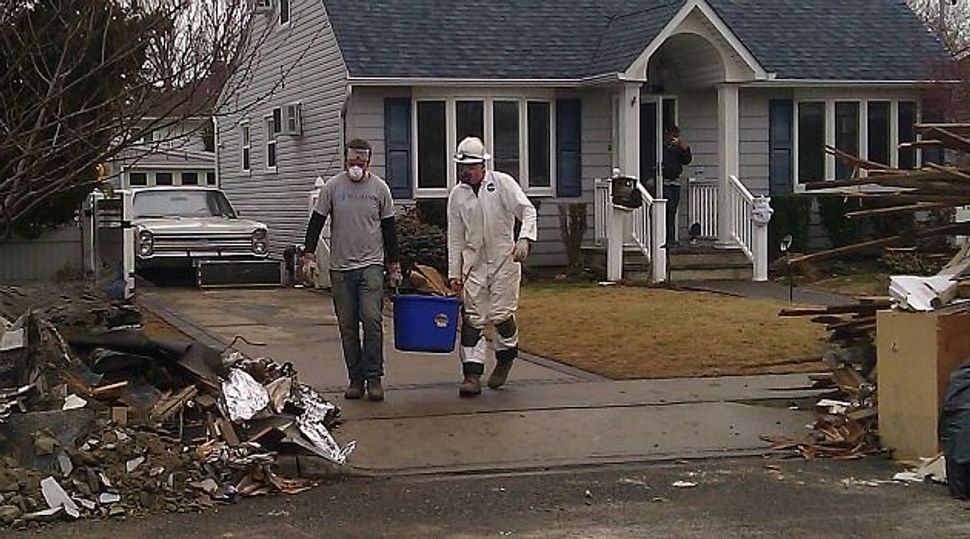 More than a month after Hurricane Sandy swept ashore, Charlie Messler had all but lost hope of getting government help to rebuild the home that was originally built by his grandfather nearly six decades ago.

Desperate to restore the ruined ground floor, Messler considered selling part of his vintage car collection, which includes a pair of 1928 Chevys, to pay for the work.

But Messler, who is Catholic, first asked a local church and synagogue to put him in touch with private groups that might help.

Within days, a team from Nechama: Jewish Response to Disaster, a little-known Minnesota-based volunteer group, showed up at Messler’s door. Along with volunteers from AmeriCorps, the team gutted the wrecked floor in two days.

“I think they’re doing great,” said Messler, 39, a school custodian who lives in the bungalow with his disabled wife and their two children. “I saw immediately they were capable. They’ve helped out tremendously.”

Nechama volunteers did the same at the South Baldwin Jewish Center, the United Synagogue of Hoboken, and more than 50 other houses and buildings in the New York area.

Messler had never heard of Nechama. But even beneficiaries with a stronger connection to the Jewish community were mystified by the arrival of the largely unknown group that worked with pinpoint precision.

“I had never heard of them,” said Stacey Eager-Leavitt, president of the South Baldwin Jewish Center, on Long Island. “I actually had to look into it after they came. They were like knights in shining armor.”

Nechama didn’t fall from the sky, even though Rev. Alexander M. Santora describe in helping restore Our Lady of Grace Roman Catholic Church in Hoboken, N.J., as, “like angels descended from heaven,” in an interview with WINS radio.

Nechama, which means “comfort” in Hebrew, is based in the Minneapolis suburb of St. Louis Park. The majority of its work has been helping flood or tornado victims in small towns in Iowa, North Dakota and Missouri, most of which have few, if any, Jewish residents.

Nechama’s Sandy work is the first time the group has been able to assist a large Jewish community for an extended period of time.

The organization would like to expand its work to rebuilding the homes, but that remains beyond its limited capacity. Even with a recent increase in donations, Nechama remains a small operation that, with only four full-time staff members, has struggled to stay afloat financially.

“A lot of homeowners have asked us: “What’s next? What’s my next step?” said Starbuck Ballner, Nechama’s operations and administrative coordinator. “We offer something very time sensitive and needed. What you’re seeing here is the first step in a long process.”

Ballner said his team has been exposed to “a lot of raw emotion, a lot of uncensored, unfiltered reactions and emotions, and a lot of different stages of grief” from Sandy victims.

Nechama was created in 1996 by Steve Lear, a financial planner who had volunteered during floods in Iowa in the early 1990s. A member of National Voluntary Organizations Active in Disaster, Nechama deploys trailers filled with such equipment as chainsaws, pressure washers and other tools necessary for demolition to affected sites.

Once on the ground, Nechama reaches out to organizations and community groups for volunteers and assistance in finding housing for its volunteers.

Avi Lewinson, executive director of the Kaplen JCC, in Palisades, N.J., hosted some volunteers. Some center workers volunteered with Nechama for a day, and were blown away by the impact.

They told me, ‘Avi, it’s unbelievable.’” Lewinson said of his staff’s reaction when they returned.

“They knew what needed to be done and how to organize our people to do it,” said the United Synagogue of Hoboken’s Rabbi Robert Scheinberg. “They had generators and lights and everything needed to complete this task.”

Lewinson, who helped gather meals and supplies for the Nechama team during its three weeks volunteering in northern New Jersey, said he contacted other Jewish community centers asking them to consider entering into a formal relationship with Nechama.

“If we could, we would be their partner in every city and state in the country,” he said. “We’re open to everybody, they’re open to everybody. We’re exactly who they are; it’s exactly the same Jewish values we believe in. “The only thing that stops them from doing more [is], they need financial support.”

Bette Birnbaum, a member of the United Synagogue of Hoboken who was recently named to Nechama’s board, said the organization received an increase of support while helping in New Orleans after Hurricane Katrina, where Nechama stayed for up to a year, but “it wasn’t enough to create the funding and sustenance for the organization, which always seems to hang on by a thread.

“My perception is that they plow their money into the work,” Birnbaum said. “It’s very expensive to run, just on the equipment and gas.”

Bill Driscoll Jr., Nechama’s executive director, said that as word of mouth of Nechama’s recent work has spread, the number of Jewish volunteers has increased, along with donations. The Reform and Conservative movements have also made significant donations. . Ballner estimated that he stays up until midnight each day, filing paperwork and preparing for the next day’s work, but the long hours won’t deter him from helping as many affected parties as he can while Nechama has the resources.

“It doesn’t matter how much sleep I get,” he said. “I’m excited to wake up every morning. I’m proud to wake up and work for this organization.”