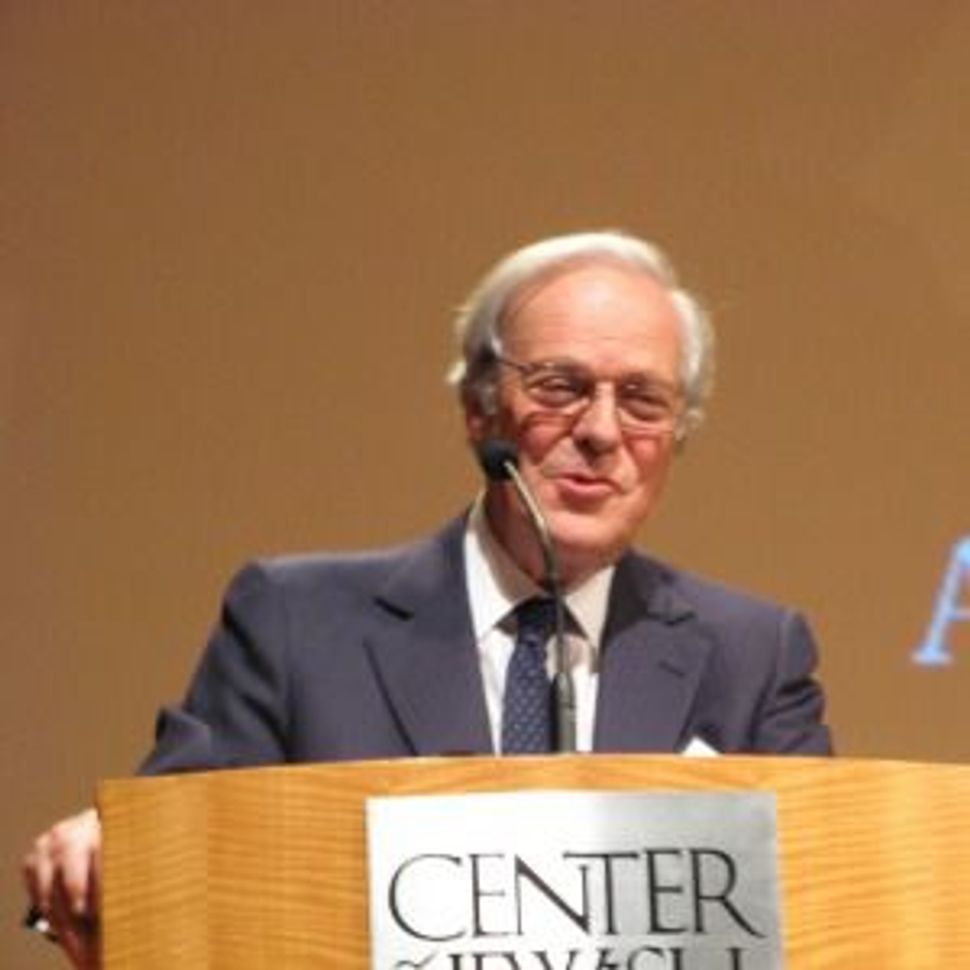 “I’m not Franco-centric, but you understand from my Gallic English that I am French,” said Baron David de Rothschild, honoree at the YIVO Institute for Jewish Research’s 87th Benefit, which was held at the Center for Jewish History on December 4. A sixth-generation descendant of Mayer Amschel Rothschild, founder of the banking dynasty, David Rothschild is chairman of the Rothschild Group, which is owned by Paris Orleans. “As it happens, the French-Jewish community is — putting Israel aside — the second-largest community after your great country, where I had the privilege of being born [in New York in December 1942],” Rothschild said. “Being born here means a lot to me [because] 1942 was the year of massive deportations of the Jews of France and, I always say, if I hadn’t been born here, I would not be here.” 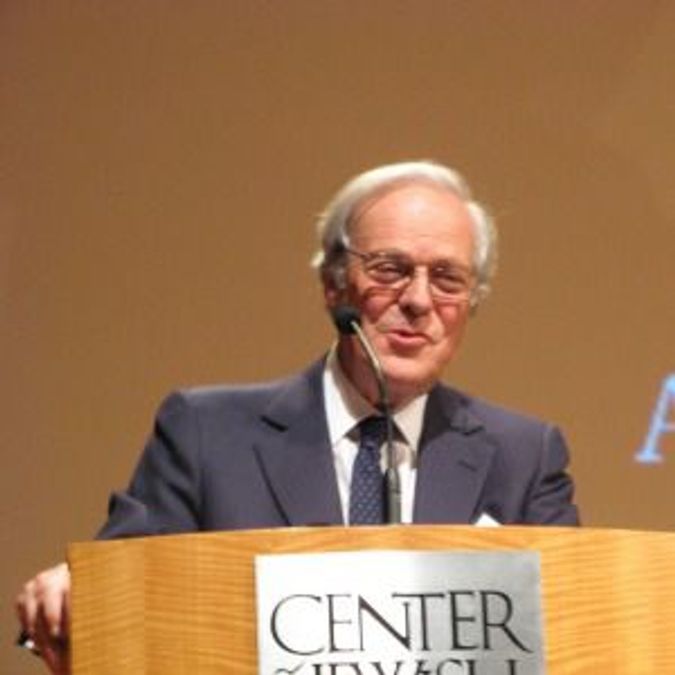 Following an overview of YIVO’ s history and mission by Executive Director Jonathan Brent, Niall Ferguson, a British historian and author of two volumes on the Rothschild family, brought to life the voice of Nathan — founder of the English house of Rothschild — by reading a chastising letter Nathan sent to his brothers. At the conclusion of the extraordinary evening, French philosopher and author Bernard-Henri Levy delivered an impassioned, 24-minute exposition on the historic role of the Rothschilds in France.

“What is remarkable about the Rothschilds [is that] they were proud of their Jewishness. Their alliances [with non-Jews] were never made at the expense of Judaism,” Levi said. “In the ’30s and ’40s so many rich Jews could not believe that the huge beast that [was] Hitlerian barbarity could reach them. They believed they had a sort of armor of richness and respectability that sheltered them forever.” Levy read from Baron Guy de Rothschild’s (David Rothschild’s father’s) memoir: “All the people, rich and poor, Rothschild and not Rothschild, were reduced to a sort of terrible equality.” He added his own conclusion: “In front of anti-Semitism [all] Jews are on the same line.”

Accepting the YIVO award from presenters Martin Peretz, a YIVO board trustee, and hedge fund maven William Ackman, the CEO of Pershing Square Capital Management, David de Rothschild declared: “I will not become arrogant. I receive the award for my ancestors, not myself.” He continued: “For at least 2000 years there have been Jews in France.” Rothschild then referenced the 11th-century biblical commentator Rashi of Troyes (1040-1105) and quipped: “He was a winemaker. I tasted his wine. Not as good as the Rothschilds’ wine today, I promise you.”

Changing course, he declared: “There is a misrepresentation in your country that France is a very anti-Semitic country. It’s more complex and more subtle.” He went on: “What people don’t remember is that 76,000 Jews were deported from France; 11,000 children died. But between two-third and three-quarters were saved by Jewish institutions, Catholic institutions and a vast number of very courageous non-Jews who risked their own life protecting Jewish children and families. I feel proud when I see that 3,600 Righteous Among the Nations [at Yad Vashem in Israel] are French.” Finally, Rothschild, who is chairman of The Foundation for the Memory of the Shoah, a group that finances trips to Auschwitz for students and teachers, quoted Golda Meir: “Pessimism is a luxury that Jews cannot allow themselves.”

Two members of my family carry EpiPens because of food allergies, so for me the announcement at the Food Allergy Initiative Ball on December 3 that FAI had merged with the Food Allergy & Anaphylaxis Network (FAAN) was welcome news. Corporate dinner chair David Koch, a board member and executive vice president of the private energy conglomerate Koch Industries, praised the merger, whose new acronym is FARE, “for building awareness of life-threatening food allergies that impact millions of families including my son.”

Attended by 400 guests and held in a huge tent set up in the Waldorf-Astoria’s Grand Ballroom, the black-tie event honored celebrity chef Ming Tsai, star of the PBS cooking show “Simply Ming,” with a lifetime achievement award. Describing his “heartfelt commitment to serve allergen-free dinners,” Ming explained, “The EpiPen has saved my son’s life. David was born with allergies to soy, dairy, shellfish, wheat, tree nuts and peanuts.”

The guest of honor was Heather Bresch, CEO of Mylan Inc., a pharmaceutical company whose “EpiPen for School” program provides free auto-injectors to schools across the country. Gala chairs Julia Koch and Sharyn Mann and benefit chairs Lilliane Silverstein Backal and Arthur Backal, Abbey and Steven Braverman, Patricia and James Cayne, Nina Rennert Davidson and Mitchell Davidson, Roxanne and Dean Palin and Stephanie Winston Wolkoff and David Wolkoff all have children with life-threatening allergies. A special treat came in the form of a performance by Lilla Crawford and Anthony Warlow, stars of the Broadway revival of the Martin Charnin and Charles Strouse musical “Annie.”

You’d have thought it was Fashion Week at Cipriani 42nd Street on December 5, when glittering guests gathered for the fifth annual Family Business Dynasties Dinner. Gala honorees Donald Trump and Kathy and Rick Hilton were described in the event’s program as leaders of “two of the most powerful families in the world.” Tall slender stunners in startling gowns mingled with Trump, his wife Melania Trump and extended family that included Jared Kushner (Ivanka Trump’s husband) and benefit committee members Cornelia and Martin Bregman and Jean and Martin Shafiroff.

With brother Eric Trump at her side, a regal Ivanka Trump, who is executive vice president of the Trump Organization, presented her father with the Legendary Icon Award. Praising her father’s “incredible track record as a builder,” she described him as “a man obsessed with detail, a man of his time, a man ahead of his time.” Sharing the stage with their photogenic daughters Paris Hilton and Nicky Hilton, Kathy Hilton, founder of Kathy Hilton Designs, and her husband Rick Hilton, chairman of Hilton & Hyland Real Estate Beverly Hills, graciously accepted New Dynasty Leadership Awards. Geraldo Rivera emceed the European School of Economics Scholarship Fund. Donald Trump praised the institution as “a great school, great students and, honestly, most importantly, a great, great tenant!”