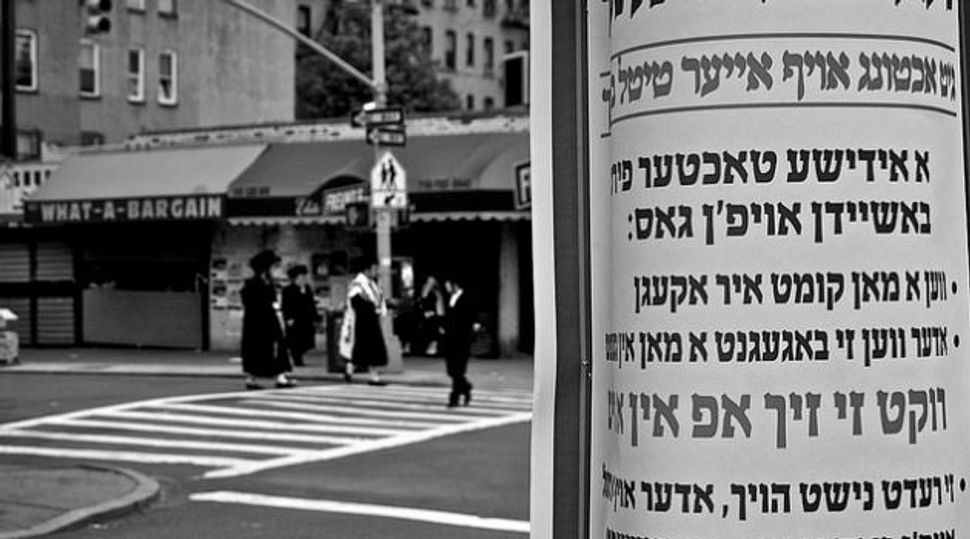 Community Pressure: Posters in Brooklyn call on Jewish women to abide by ultra-Orthodox standards of ?modesty.?

One of the most striking ironies of the Nechemya Weberman trial, which ended with his conviction on 59 counts of sexual abuse, was the revelation that the unlicensed therapist was a member of the Va’ad Hatznius, or modesty patrol, the self-appointed arbiters of right and wrong in the Satmar community.

Until recently, the Va’ad Hatznius was little known outside the Hasidic community, but its actions have reverberated through the community for years. Although they ostensibly monitor the moral behavior of both sexes (men and women are both warned not to read English books, watch television or surf the internet), most of their energies are directed towards ensuring that women and girls dress and behave modestly.

Their reasoning is clear: When a female wears revealing clothing or chats with the opposite sex, it could entice the men, and lead to dire consequences. In other words, the goal of their injunctions is to inhibit the sexual impulses of the male population.

Where did the tradition of the Va‘ad Hatznius originate? And what do the Hasidim themselves think of it? The term V‘ad Hatznius doesn’t appear in the Bible or in the Talmud, but Maimonides does write, in Hilchos Yom Tov 6:21, that “the Beit Din [rabbinical court] must appoint officers during the festivals to patrol the gardens and orchards and along the rivers to prevent men and women from gathering there to eat and drink, lest they fall into sin.”

The Jewish communities of eastern Europe didn’t use the term Va’ad Hatznius either but religious leaders did issue rulings, forbidding women from publicly wearing fashionable clothing and jewelry, said Dr. David Fishman, professor of Jewish History at the Jewish Theological Seminary. The rulings were announced after prayer services in the synagogue or through posters hung on the synagogue door. In larger cities, posters were hung in a number of places.

A book about these rulings, published in Yiddish by Mordkhe Bernshteyn in Argentina in 1955, explains that these decrees were often quite detailed. According to rules issued by the burial society of the town of Rymanow at the turn of the nineteenth century, for example, women were forbidden from wearing golden veils, pearl-studded or silver-lined kerchiefs. In addition, the dictum said, “women should not wear any fashionable dress or shoes. Even their kerchiefs should be similar to those that their mothers wore.”

Women who defied these rulings were penalized monetarily, as were the tailors that designed them, and if a tailor continued to sew fashionable clothing, he could lose his work permit, Bernshteyn writes, quoting the records of the Rymanow tailors’ guild.

The intention of those rulings had nothing to do with preventing sexual temptation, however. “They were simply worried that if Gentiles were to see how much money Jews were spending, the wealthy landowners would raise the taxes for the entire Jewish population,” Fishman explained. In fact, men, too, were warned not to dress in conspicuously lavish clothing or wear powdered wigs.

However, these rulings were issued during a time when Jews were collecting taxes for the Czarist government and hence had the power to levy fines against members of their own community, and ex-communicate or penalize them for defying the rules. Once the Czarist government took away the power of the Jews to tax their own population in 1844, the only means that community leaders had to ensure adherence to their rulings was through social pressure – a tactic which has remained effective till today, as Hasidim continue to fear being ostracized from their community or losing valuable marriage prospects as a result of so-called indecent behavior.

The strict separation of men and women is a relatively modern one, Fishman explained. In Czarist Russia, men and women used to stand together at weddings; there was no mekhitse, or partition between them. When Sh-Anski, the author of The Dybbuk, led his series of landmark ehnographic expeditions through Volhynia and Podolia in 1912–1914, he photographed cemeteries in which the graves of even the most pious couples were found side by side. Today most Hasidic men are buried separately from their wives. The Ohel (gravesite) of the Lubavitcher Rebbe Menachem Mendel Schneerson, for example, is not next to the grave of his wife, Chaya Mushka.

Rabbi Ysoscher Katz, who was raised in the Satmar community of Wiliamsburg, and is the director of the Beit Midrash program at the modern Orthodox rabbinical school, Yeshivat Chovevei Torah, told the Forverts that the Va’ad Hatznius isn’t an organized body but an informal group of people who act on their own, and whose actions the Rebbe doesn’t officially condone. Every v’aad is comprised of a theoretician, one who decides which kind of behavior to ban, and enforcers.

The theoretician is usually a well-regarded figure, while the enforcers give a more fanatical impression, Katz explained. “They usually wear their tsitsis out, their hair and clothing is unkempt, and they have no job, so they don’t elicit much respect from the community. Weberman was undoubtedly a theoretician, his tsitsis didn’t hang out, his hair was combed, he had a job, this is why families trusted him.”

Katz recalled that the Va’ad Hatznius of Williamsburgh issued an edict about 20 years ago against women wearing ponjelos (loose houserobes) and turbans that revealed some hair, as they stepped outside to dump the garbage. Posters were hung everywhere, warning that tragedies might befall the community if women didn’t start dressing modestly. The Va’ad also rebuked the owners of dress shops for selling ponjelos and immodest turbans.

Katz says that the Satmar Hasidim he knows are privately upset with the Va’ad. “They say they’re bullies, extremists and have nothing better to do because they have no jobs,” he said. “But even if people don’t admire them, they still fear them.”

Rabbi David Niederman, President of the United Jewish Organization of Williamsburg, denied any knowledge of the Vaad Hatznius. When asked whether the group has the blessing of the Satmar rebbe, Niederman replied: “I don’t know (what) the Va’ad Hatznius is all about.”

The UJO is the central planning and social service agency for more than 200 organizations in Williamsburg.

The Satmars are not the only Hasidim to use modesty patrols. Katz remembers an incident his friends had with the Va’ad Hatznius of the Gerer Hasidim, while studying in Israeli yeshivas during their teen years. They had heard that the Tel Aviv Museum was interesting, so they took a trip there. Soon afterwards, their parents back home in the United States received anonymous phone calls, warning them: “You have no idea what your children are doing in Israel.”

“My friends suspected that the Va’ad was shadowing them – Katz said – and one day there was a knock at the door, and there was a Gerer Hasid saying, in Yiddish: ‘We’ve heard that improper things are going on here, that there are too many newspapers. So I’ve come to check it out.”

“Look all you want, you won’t find anything,” one of the students replied. The Gerer Hasid searched the entire apartment until he found an issue of Time Magazine with a photograph of Princess Diana on the cover. “You see?!” he exclaimed. “There really are impurities here!”

This article was adapted from the Forverts.