Goldberg Versus the Wrecking Ball 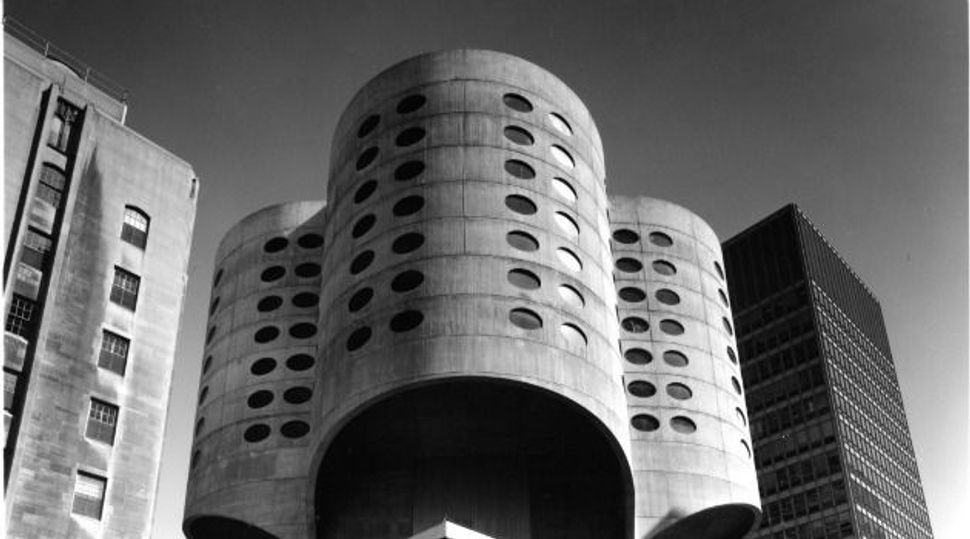 Bertrand Goldberg’s Prentice Women’s Hospital building, built in Chicago in 1975, stands at 333 E. Superior St. off Michigan Avenue. Its concrete curves refuse to conform to the shape of the immense, boxlike buildings that surround it. One can only see its egglike form — suggesting the petals of a flower, something organic and alive — when standing in front of it, as the rectilinear buildings surrounding it hide it from view.

Prentice is a mere husk, though, empty and slated for demolition. The building has been unused since 2007, when Northwestern University completed its new hospital building. A preservation group, the Save “Old” Prentice Coalition, is now engaged in a battle to seek landmark status for old Prentice.

Northwestern has claimed that reusing old Prentice as part of a modern medical research facility isn’t feasible, and that demolition is the only answer. In July, 60 prominent architects, including Frank Gehry and Jeanne Gang, published a letter to Mayor Rahm Emanuel arguing that Prentice should be saved: “[W]e believe Goldberg’s Prentice should be given a permanent place in Chicago’s cityscape. A building this significant — this unique in the world — should be preserved and reused.”

Yet on October 30, two days before the scheduled meeting of the Chicago Commission on Chicago Landmarks, Emanuel published an op-ed in the Chicago Tribune declaring that the building should be demolished to allow Northwestern to build afresh.

“The promise of a new medical center that would bring 2,000 jobs and hundreds of millions of dollars in investment to our city must be weighed against the importance of honoring Chicago’s past and one of our great architects, Bertrand Goldberg,” Emanuel wrote.

Apparently the mayor thinks that two Goldberg buildings in one city are enough: “I also know that Bertrand Goldberg’s vision is alive in Chicago beyond one building,” he wrote. “We see his legacy towering over the Chicago River in Marina City. We see it in the Raymond Hilliard Homes.” Emanuel can say this only because Prentice has not received the public acclaim or embrace that Marina City has, and that it deserves. 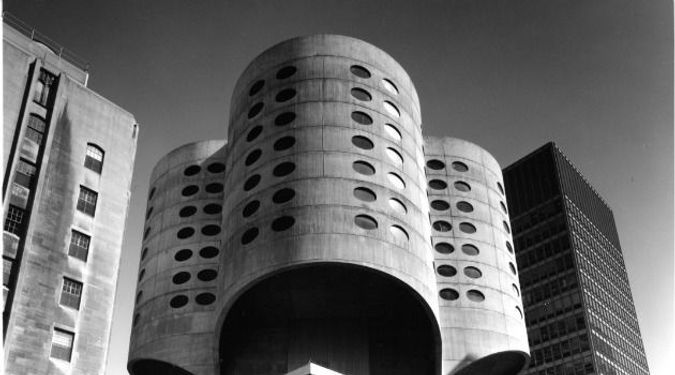 When the Commission on Chicago Landmarks did meet, a report was presented regarding Prentice’s virtues and the commission voted unanimously to grant landmark status — only to rescind that status two hours later, after a housing commissioner reported that the importance of Northwestern’s biomedical research plans outweighed that of preservation. On November 15, preservationists filed suit against the city and the commission, seeking to reinstate landmark designation and claiming that the rushed process was illegal. The judge granted an immediate stay to protect Prentice from demolition until the legal issues are resolved. Oral arguments on the city’s motion to dismiss the lawsuit will be heard on January 11.

Underlying the dispute over Prentice is a lack of understanding of the building’s significance. Northwestern, in its talking points for demolition, states, “Most architects would agree that Marina City is a better example of Bertrand Goldberg’s work.” But Prentice is a different building than Marina City. It’s the pinnacle of Goldberg’s work creating clusters in hospital design.

At the November 1 meeting, as reported by the Tribune, Burton Natarus, the well-known and voluble former Machine alderman of downtown Chicago’s 42nd Ward, stated, ‘This is not a good piece of architecture. We have a Yiddish word for what it is, farshimmelt.’” Natarus’s insult reflects how Prentice the building, and Goldberg the architect, have been viewed. For Natarus to say that Prentice is farshimmelt is to say that it appears confused, mixed up. But Prentice has a certainty of purpose and a unity in design. As the landmarks commission itself writes, “To provide a flexible, column-free interior, the thin-shell concrete bed tower is carried on arches cantilevered from a single core superstructure, a rare and possibly unique structural solution that is clearly visible on the building’s exteri-or and defines the building’s overall appearance.” Few are aware of the powerful feeling for social justice that fueled Goldberg’s designs — of how his architecture is not just about building with circles but about creating spaces infused with humanity.

As Gavriel Rosenfeld writes in “Building After Auschwitz, Jewish Architecture and the Memory of the Holocaust,” his buildings reveal a commitment to social justice that arguably stems from his Jewishness. Goldberg and his generation of Jewish architects were tight-lipped about their heritage, unlike Gehry or Tigerman, who, built in the postmodern, multicultural ’80s and ’90s, when flaunting ethnicity was hip. Yet Goldberg’s Jewishness comes out in his architecture. When the government initially rejected his designs for the Raymond Hilliard Homes as being “too good for the poor,” Goldberg, distraught, called his friend Charles Swibel, a Polish Jew, who was head of the Chicago Housing Authority, and also the developer of Marina City.

As Goldberg recounted, “I said to [Swibel] that I considered [the government’s rejection of my design for the Hilliard Homes] to be the equivalence of book burning. I think we were all close enough to the German experience to understand what significance book burning had in terms of intellectual and moral importance.” Few are aware of Goldberg’s experience fleeing Nazi Berlin. Born in Chicago in 1913, Goldberg attended Harvard from 1930 to 1932, when he decided to go to Germany to study architecture at the Bauhaus under Mies Van Der Rohe. In 1933 he had to leave Berlin suddenly when his cleaning lady informed him that his landlady was about to turn him in to the German police. Goldberg fled to France and then returned to Chicago, where he first worked for the architecture firm Keck & Keck before opening his own office.

Intrinsic to Goldberg’s work is a resistance to collectivism as was espoused by nationalistic, racist Nazi Germany in the 1930s; he saw this emphasis on the group over the individual reflected in Mies’s buildings after the war. In contrast, Goldberg endorsed humanistic liberal individualism, which is at the heart of the Prentice design. Goldberg said, “Mies’s message was a message for a universal person…. Mies says, ‘I will teach people to live in my buildings,’ I say I will seek the buildings that permit people to live.’”

Goldberg’s desire to restore humanism to people’s experience was at the heart of the Prentice design. His vision for a new kind of maternity hospital was the product of massive research into human functional patterns — in this case, how maternity patients and nurses could interact in space in a nurturing, personal way. This wasn’t just Goldberg creating curves for the thrill of it. Rather, Prentice’s innovative design had a humanistic purpose: “[T]he clover-shaped floor plan clustered new mothers, babies and nurses in ‘quiet villages’ of care.” In Goldberg’s words, “the bed tower has replaced the anonymity of the long hospital corridor with a promise of a community for care. The structure clearly shows that each floor provides four clusters of increased, intimate concern between the patient and the physician or nurse.”

Nurseries were located at the center of each “care cluster,” fostering a close relationship between mother and baby; mothers could have access to babies at all times. Two nursing stations were located at the center of each floor, with each station serving two clusters. The plan was designed to allow nurses to maintain visual contact with their patients. The close proximity between nurses and mothers was designed “to create a quieter, more peaceful atmosphere.”

Granted, Prentice probably cannot be converted to meet the demands of today’s system of medical care. But that is not what preservationists are asking. Landmarks Illinois prepared a study showing the merits and feasibility of reusing the building for three purposes — as a research lab, an office or medical-related housing. And architects have more reuse ideas. Chicago architect Jeanne Gang has proposed building a 31-story research tower on top of old Prentice. The Chicago Architecture Foundation’s current exhibit running through February 8 — “Reconsidering an Icon: Creative Conversations about Prentice Women’s Hospital” —includes the three winning entries in “Future Prentice,” the Chicago Architectural Club’s 2012 Chicago Prize design competition, each proposing adaptations of Prentice that would also suit Northwestern’s needs. The third prize winner, Bridging Prentice, embodies Goldberg’s desire to rejuvenate the city by removing floors to make the top an elevated park, providing green space and a plaza for hospital patients, staff and the public, as well as providing for new research labs for Northwestern.

How deeply sad and ironic, then, that this dynamic space for sheltering new lives — created by an iconoclastic architect fueled by humanistic ideals — lies empty. And how much sadder if Northwestern destroys the building, which not only represents Goldberg and his legacy, but also evokes his modernistic optimism for the possibility of a new and better world.

Laura Hodes is a writer and lawyer in Chicago. She writes frequently about the arts for the Forward.

Goldberg Versus the Wrecking Ball