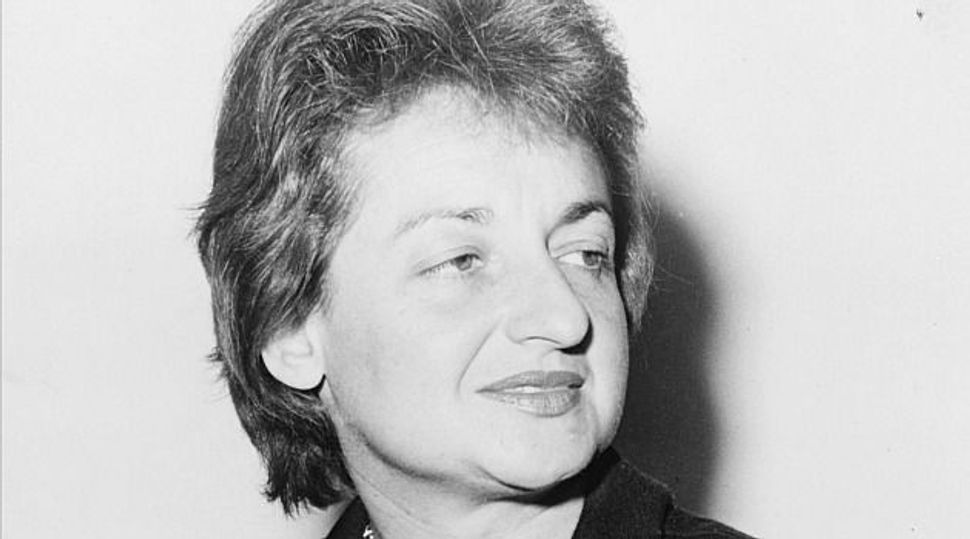 Betty Friedan wrote ?The Feminine Mystique? in 1963, defining for generations of women the problem that has no name. Image by Library of Congress

It was bound to catch up to us at some point: the problem behind the problem with no name.

In her seminal 1963 book, “The Feminine Mystique,” Betty Friedan described this nameless dilemma: As each suburban wife “shopped for groceries, matched slipcover material, ate peanut butter sandwiches with her children, chauffeured Cub Scouts and Brownies, lay beside her husband at night — she was afraid to ask even of herself the silent question — ‘Is this all?’”

The answer to that question, a resounding “No!” fueled second-wave feminism and eventually opened the door for women to move beyond the domestic sphere. Still, another question remains. Who, exactly, is supposed to chauffeur our children to Cub Scouts? Or, for Jewish mothers like myself, who will prepare Friday night dinner and schlep our kids to Hebrew school while we write books and close deals overseas?

This question has re-emerged as one of the central feminist issues of 2013. Sure, we shattered the glass ceiling, but now we have to figure out how to crumble, or at least climb, the maternal wall.

Discussions about the seemingly impossible work/life balance abound, from Anne-Marie Slaughter and Judith Shulevitz’s cover stories in The Atlantic and The New Republic to countless blog posts bemoaning America’s lousy maternity leave and child care policies, and to the heightened scrutiny placed on high-profile women about working while mothering. Facebook’s chief operating officer, Sheryl Sandberg, has made it her mission to encourage women to pursue ambitious careers before having children; as she puts it, “Don’t leave before you leave.” And Yahoo CEO Marissa Mayer boldly announced her pregnancy soon after accepting her job, then stated that she would take a few weeks of maternity leave — generous for a man, scandalous for a woman.

As a 33-year-old new parent living in New York City, I know firsthand that the solutions are obvious: flexible work schedules, maternity and paternity leave, affordable child care as well as a shift in office culture that applauds good parenting instead of quietly resenting it. My female friends are an ambitious bunch; they attended top schools and worked assiduously through their 20s to become razor-sharp attorneys, intuitive designers and insightful writers and reporters. Yet I don’t know a single one that has not soft-pedaled her career after having children, all the while her husband is carrying on, full-steam ahead.

A 2012 survey from the Bureau of Labor Statistics showed that even as women have gained professional ground, they still do more housework. Unfortunately, the numbers have been stagnant for years. In 2011, 83% of women and 65% of men “spent some time doing household activities such as housework, cooking, lawn care or financial and other household management.” In 2010 the numbers were 84% and 67%, and in 2003 they were 84% and 63%.

“Having it all” might be impossible, but I will try. I want to create the same warm home environment my stay-at-home mom gave me, and I want to experience the same sense of purpose and accomplishment that my father had building his business. After Passover Seders, I want to linger in the kitchen, washing up and discussing my kids like my mom and aunts did, but I also want to remain at the table and discuss politics like my dad and uncles did. The rub is, I want my husband to want the same thing. And I want the world around us to support these desires. Perhaps 2013 will be the year that we start making the necessary gains for these seemingly humble wishes to feel attainable. Without these changes, we are still stuck with the problem behind the problem with no name.

Elissa Strauss is a contributing editor to the Sisterhood and a journalist in Brooklyn. She can be contacted at [email protected].